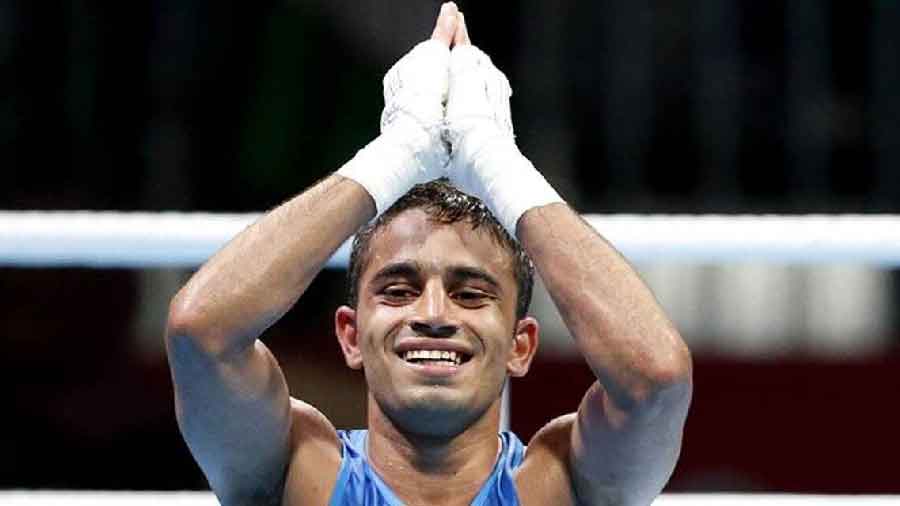 Amit Panghal ensured a fourth medal for India from the boxing ring after winning his flyweight (48-51 kg) quarter-final against Scotland's Lennon Mulligan at the Commonwealth Games on Thursday.

It was a unanimous verdict in favour of the Indian southpaw. Panghal had won a silver medal during the last edition in Gold Coast.

The bout wasn't of great quality but the 26-year-old India prevailed over his much younger Scottish opponent, tiring him out with a solid defence. He gained points with occasional ferocious counter-attack.

In the first two rounds, Panghal employed a guard down approach to invite Mulligan to go on the offensive but swayed away from his reach with some nimble footwork.

In between he did land a couple of left jabs to rattle the 20-year-old Scot and in the final round unleashed a barrage of 'one-two' combination (a left-jab followed by a right cross).

Mulligan in fact got a standing count and by the end of round two, the writing was clear on the wall that Panghal will earn a second CWG medal.

Nikhat Zareen (50kg), Nitu Ganghas (48kg) and Mohd Hussamudin (57kg) have also reached the semifinal stage to be assured of medals in their respective categories.