Ireland had led through John Egan’s first goal for his country up until the 89th minute when Ronaldo struck, his 110th international goal 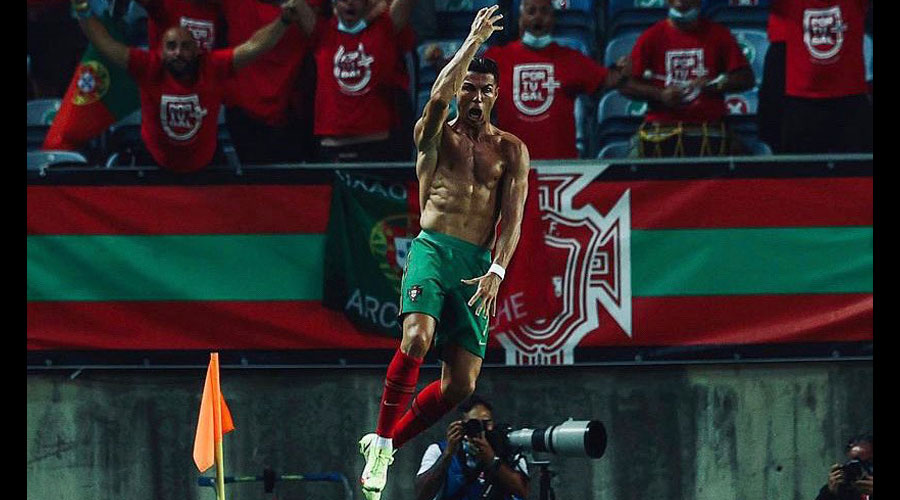 Great players keep going right to the end. Cristiano Ronaldo, among the greatest, scored twice late on to break the world international goal-scoring record and Ireland hearts in the process after Stephen Kenny’s team looked as though they were going to come away from Portugal with at least a point on Wednesday night.

Ireland had led through John Egan’s first goal for his country up until the 89th minute when Ronaldo struck, his 110th international goal.

His movement was impeccable, darting this way and that to free himself from the attentions of the defence and get on the end of substitute Goncalo Guedes’s cross to power in a headed equaliser.

That was cruel on Ireland but the agony didn’t end there as Ronaldo struck again with an almost identical header from a Joao Mario cross at the end of six minutes of stoppage time.

Up until that frantic last 10 minutes of the game, it had looked like a night of frustration for Ronaldo, who had begun the game level with Iran’s Ali Daei on 109 goals. Ireland’s 19-year-old goalkeeper Gavin Bazunu saved a penalty from the new Manchester United signing early on and the striker cut a frustrated figure for much of the game.

“I’m very happy, not just because I beat the record but for the special moments that we had,” Ronaldo said.

“Two goals at the end of the game is so tough but I have to appreciate what the team did in the end.”

Ronaldo, who first played for Portugal in 2003 and has now won 180 caps, shrugged off his penalty miss. “It’s part of the business,” he said. “Sometimes you score, sometimes you miss, but I still believed to the end of the game.”

The result left Portugal top of group A with 10 points from four games while Ireland are still pointless after three matches.

While Ronaldo's night was almost perfect, there was one blot on his copybook.

He was booked for taking his shirt off while celebrating the winning goal, meaning he will miss Portugal’s trip to Azerbaijan on Tuesday.

That may be good news for Manchester United, however, as Ronaldo is expected to play the first match of his second spell at the Premier League club against Newcastle United on September 11.