Wanted to face challenge with the World Cup in mind: Rohit 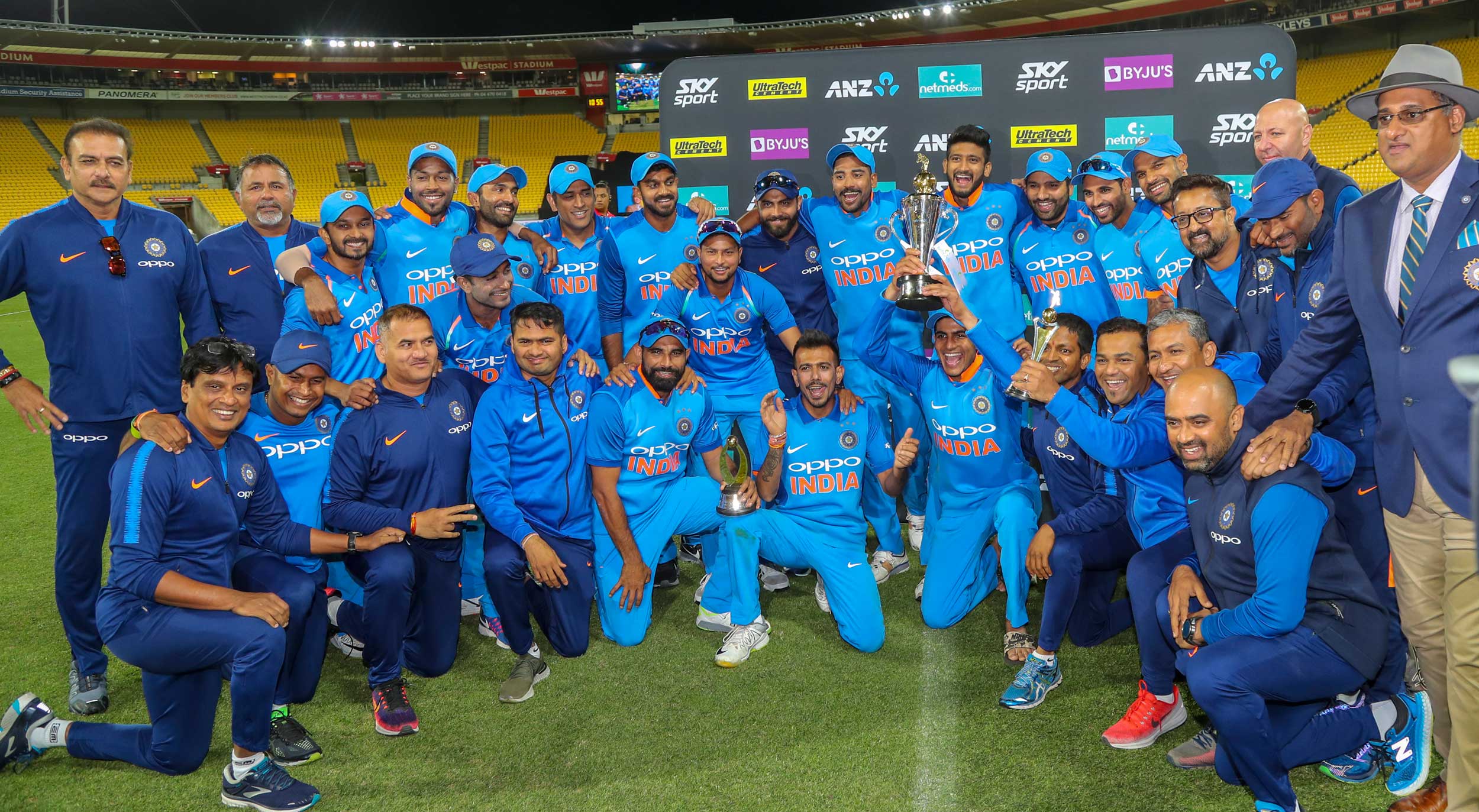 Stand-in skipper Rohit Sharma took a bold decision of batting first on a fast-bowling friendly Westpac Stadium pitch in Wellington, and it paid off.

After India won the fifth ODI against New Zealand by 35 runs to clinch the series 4-1 on Sunday, Rohit said India wanted to bat in tough conditions as part of their preparation for the upcoming World Cup.

Despite initial hiccups India notched up 252, before bowling out New Zealand for 217 in 44.1 overs.

“I had a look (at the pitch) before the toss and knew that there was moisture, which would have been helpful for the fast bowlers initially.

“Yes, we lost four wickets upfront, there is a lesson there for us as how we should bat when the ball is swinging and conditions are not easy. The guys now know, if the situation comes, how to handle it.

“The run rate was not great in first 30 overs, but we still managed to get to 250, which is a big positive,” he added.

The 4-1 scoreline is India’s biggest series win in New Zealand across formats since they started touring the country in 1967, and Rohit said it was a “massive” achievement.

“Coming here and beating New Zealand 4-1 is a massive achievement. They play very good cricket, so it is a great takeaway for us. Last time we were thrashed 0-4. We didn’t have a point to prove, but we just wanted to play good cricket, which we have been doing for the past 8-10 months now,” Rohit said.

“New Zealand have got great balance. They bat deep and have a quality bowling line-up. We saw a bit of that in last game where they challenged us. For us, 4-1 is a great achievement.”

India was thrashed by eight wickets in the fourth ODI in seaming conditions in Hamilton. They were dismissed for a paltry 92. On Sunday also, India were staring at another sub-100 total after being reduced to 18 for 4, before a middle-order fight back saw them post 252.

The 98-run stand for the fifth wicket between Ambati Rayudu (90 off 113) and Vijay Shankar (45 off 64) was the highlight of the middle-order fight back.

Rayudu produced one of his best innings to help India post a competitive total and Rohit said it will boost his confidence ahead of the World Cup.

“It would be a massive confidence booster for him (Rayudu) to bat in that situation. At 18 for 4, you need to bail the team out. He has been around for many years and he used his experience well. He is looking very good and I just want him to continue. We have five more games against Australia back home, so if he bats the way he batted, it would be good for us,” he said.

“I won’t be able to comment who would bat at No. 4 in the World Cup, but talking about the series, he can take a lot of confidence from the series, he finished off games for us.”

Praising Shankar, Rohit said: “Vijay batted brilliantly and I’m disappointed that he got out unfortunately, he should have got a 50 or even a 100 may be.”

India fielded two fast-bowling all-rounders in Hardik Pandya and Shankar for the first time and Rohit said they wanted to try out as many combinations possible ahead of the World Cup.

“We want to be very well prepared for the World Cup, so we wanted to try out all our combinations.

He also praised Kedar Jadhav, saying his presence provides balance to the team. “Kedar gives us that balance being a second spinner. I consider him a proper spinner because in every game, he bowls six or seven overs and gets a wicket as well.

“Even today, the wicket of Kane Williamson, it was crucial. He came and broke that partnership,” he said. Young Shubman Gill could not really make a mark in the two ODIs he played, but Rohit was supportive.

“He is a real good talent. With just two odd games, you can’t judge a player. He is a top-order batsman. He will be in these type of situations where ball will swing around. So, it will help him. He has done well and I don’t find any reason why he can’t play longer for India.”

“If the series was on the line, we would have played with two spinners, probably three seamers, with Kedar being there, but yes, now that we’ve won the series, after the third game, we wanted to try out various combinations which will help us going forward. So that was the idea.”

On Sunday, Hardik Pandya's 45 off 22 balls also went a long way in India posting a challenging target and his two wickets later on showed why he is such an important member of the team.