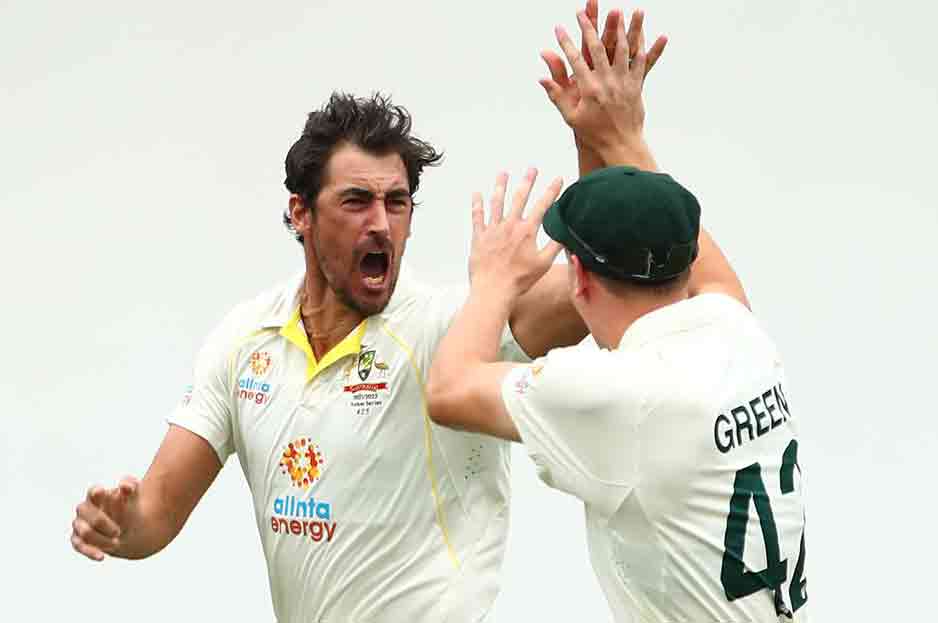 Mitchell Starc gave Australia the perfect start to the Ashes series with a wicket from the first ball on Wednesday, handing England fans a Gabba moment to rank alongside Steve Harmison’s opening delivery of the 2006-07 series.

Starc’s delivery was as good as Harmison’s was poor, a full yorker which went behind the legs of England opener Rory Burns and swung into the base of his stumps to send the bails flying.

The left-arm paceman tore off around the field celebrating wildly with his teammates as the Brisbane crowd roared its approval.

“That’s Ashes cricket isn’t it? It’s just a heightened sense of everything,” Starc told Channel 7. “To kick-start an Ashes series, I’d say there was a fair bit of emotion going on out there.”

It was vindication for Starc, whose place in Australia’s much-vaunted pace attack was called into question in the run-up to the series.

“It’s no secret that the way I go about my bowling is to be attacking,” added the 31-year-old, who finished the day with figures of 2/35.“A yorker is a big part of my game, but for me it’s trying to bowl fast and swing it and attack those stumps... was nice to see the ball swinging and get in the right spot to start the day.”

It was the second time a wicket had fallen on the first delivery of an Ashes series.

In 1936, Australia’s Ernie McCormick had Stan Worthington caught behind at the same ground to give Don Bradman the best possible start to his first match as captain.

The fear for England, who slumped to 147 all out before rain washed out the rest of the day, is that such an early blow will be as series-defining as Harmison’s opening ball of the 2006 Gabba Test.

The tourists had arrived in Australia brimming with confidence. Tossed the ball to open the series, Harmison charged in and produced a delivery that ended up in the hands of skipper Andrew Flintoff at second slip. Harmison took just 10 wickets over the series as Australia blanked England 5-0 to reclaim the urn.