The Three Lions, who lost a bucketful of wickets early in their innings, would perhaps be similarly elated having survived a tough day 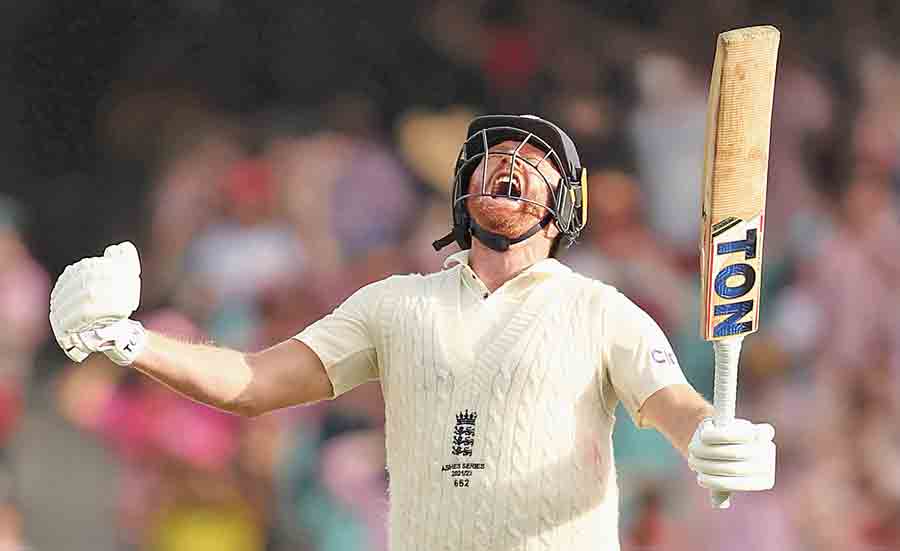 Jonny Bairstow’s feelings at the end of the third day’s play in the fourth Ashes Test in Sydney could easily pass off as the collective feeling of the England camp. Bairstow, after accomplishing a fighting century on Friday, said he was “absolutely over the moon”. England, who lost a bucketful of wickets early in their innings, would perhaps be similarly elated having survived a tough day.

Bairstow’s gutsy 103 not out was England’s first century of the series and while it helped the visitors stage a fightback, Australia still remained very much in command to win their fourth Ashes Test on the trot.

England were 258/7 at stumps in reply to Australia’s 416/8 declared, a position that looked highly unlikely when England limped battered and bruised to lunch on 36/4. But the home team still enjoyed a lead of 158 and England will need more such courageous displays to keep them in the fight.

Bairstow, 32, steadied the innings in a 128-run partnership with Ben Stokes for the fifth wicket and continued to defy the Australian bowlers when the all-rounder departed for 66.

He suffered a painful blow to the thumb from a Pat Cummins delivery but soldiered on to bring up his seventh Test century a few minutes before stumps when he slapped a delivery from the Australia captain to the boundary for a four.

“I’m absolutely over the moon to be really honest with you, it was the hardest one so far with the circumstances,” said Bairstow.

Stokes enjoyed a major stroke of luck on 16 when a Cameron Green delivery thumped onto his off stump but failed to shift the bail and he survived after a DRS review to bring up his 25th half-century just before tea.

He hit nine fours and a single six in his 91-ball knock before walking when he was trapped lbw by off-spinner Nathan Lyon. Cummins then got his first wicket of the match to dismiss Jos Buttler for a duck and his second after a DRS review detected a touch of Mark Wood’s bat on the ball before it was caught by Lyon. Wood slugged three sixes in his 39.

Bairstow will resume on day four with Jack Leach, who was four not out, looking to cut deeper into Australia’s lead.

It was quite a recovery after a breathless first session that was delayed for two hours by drizzle but burst into life in a fiery storm of pace-bowling from the Australian attack.

England lost openers Haseeb Hameed and Zak Crawley, skipper Joe Root and Dawid Malan cheaply before lunch, the last three without a single run being added to their tally of 36.

Mitchell Starc removed Hameed for six to start the collapse, but most of the damage was done by last-Test hero Scott Boland. Retained because of an injury to Josh Hazlewood, Boland struck with the final ball of his second over to remove the top of Crawley’s off stump for 18. The 32-year-old returned to remove Root when the England captain, who had yet to score, lashed out at a wider delivery and Steve Smith took the catch at second slip.

England were trying to be cautious but 53 balls without scoring only increased the pressure on them and Green brought up lunch when he had Dawid Malan caught off the glove in the slips for three.

Boland finished the opening session with figures of 2/0 from four maiden overs. “I thought our first two hours were as relentless (a display) of bowling as I’ve seen from Australian cricket,” said Australia coach Justin Langer.