Shane Warne: The King who bowed to Sachin & VVS

How the Indians, especially Sachin Tendulkar, would counter him had been the talking point 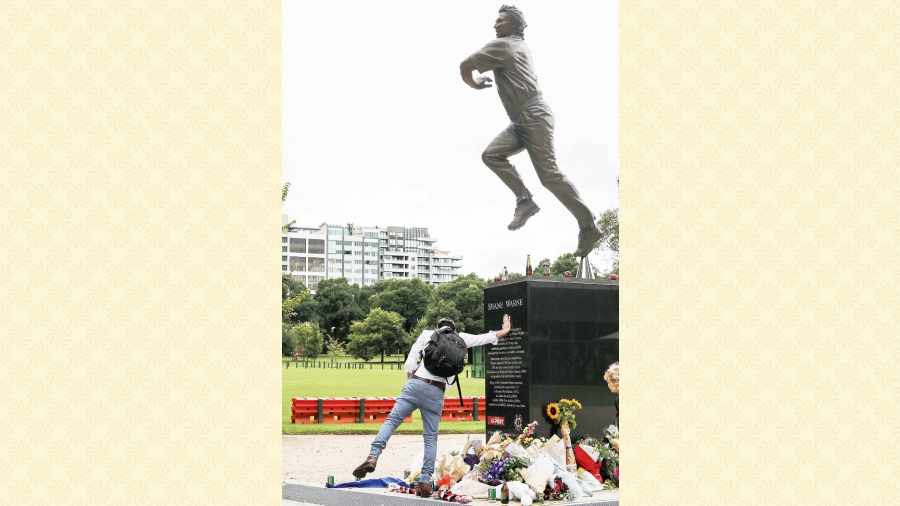 A fan pays respects at the statue of Shane Warne outside the Melbourne Cricket Ground on Saturday.
AP/PTI
Indranil Majumdar   |   Published 06.03.22, 03:06 AM

Dusk had just started to descend on the Eden greens on that March evening in 1998. Shane Warne, in his first Test series in India, had arrived in Calcutta the previous night with the Mark Taylor-led side having lost the opening match in Chennai.

Their practice over, the Australians were packing up inside the dressing room. A handful of journalists waited outside in the accompanying balcony trying to persuade Warne to speak. Those days were starkly different and cricketers didn’t look upon the Fourth Estate with suspicion. Manager Steve Bernard made it clear that Warne decides his own routine and there was no way he would persuade the leg spinner into attending an impromptu media session.

Hearing the buzz, Warne stepped out. He instantly agreed with one condition: no (still) photographers please! The reason was understandable. He lit a cigarette as he sat on one of those cane bait chairs and puffed a couple more before answering all queries.

Warne’s arrival had been marked with drama and anticipation given the leg spinner’s enviable record elsewhere. How the Indians, especially Sachin Tendulkar, would counter Warne had been the talking point.

Warne, known as the King, caused a stir before the tour began stating that he was not a fan of “exotic cuisine” which prompted Qantas to fly in 1900 tins of Heinz baked beans and spaghetti for the team.

Years later, Warne termed the baked beans story as “false and incorrect”. Seeing coach Geoff Marsh feast on a tin of spaghetti and baked beans at breakfast one day, he requested if more could be organised since three weeks were still left for the tour to end.

“So we get to the docks where the baked beans and spaghetti have been delivered and there are 3 tonnes of spaghetti and baked beans each. And on both sides of this big crate, it was mentioned ‘Shane Warne, India’. There were a lot of other players who wanted the spaghetti and beans but it was just addressed to me.

“So we all helped ourselves to a few tins and we gave away the rest to all the people in India. And that’s how the myth was born,” Warne clarified.

On the field, his four-wicket spell on the first day of that Chennai Test match was the only time he tried to dominate the batsmen. In the second innings, Tendulkar was brutal on Warne, smashing 155 off 191 balls. His first series in India had proved to be an anticlimax with Gavin Robertson (12) taking two more wickets than Warne.

The warm-up tie against a power-packed Bombay at Brabourne Stadium was equally mesmerising. Tendulkar destroyed Warne with a breath-taking 204 not out off 192 balls — his maiden first-class double century to set the tone for the Test series.

In the lead up to the opening Test, Tendulkar had approached Ravi Shastri and sought advice on Warne’s round the wicket tactics. The maestro spent four days in the nets with a scuffed spot outside leg stump and Laxman Sivaramakrishnan bowling into the footmarks.

When Warne made his move round the wicket, Tendulkar pounced on the offering straightaway. A brace of sixes and fours convinced Warne to abort this ploy. Tendulkar never looked back and finished the series with 446 runs in five innings at an average of 111.50 as India won 2-1.

Warne always spoke from his heart and believed it was Steve Waugh’s mistake to enforce the follow on in acute sultry and humid conditions during the historic 2001 Eden Gardens Test. He also credited VVS Laxman and Rahul Dravid for the turnaround during the 376-run partnership for the fifth wicket which turned the tide in India’s favour.

“He (Laxman) was hitting ‘not half-volleys’ wide of mid-on — how he did I got no idea. It was pure genius,” Warne admitted.

Such was the wisdom of Warne and his competitive instincts, the box office of cricket.