Much like their Mumbai Indians days, De Kock and Man of the Match Krunal played their roles to perfection 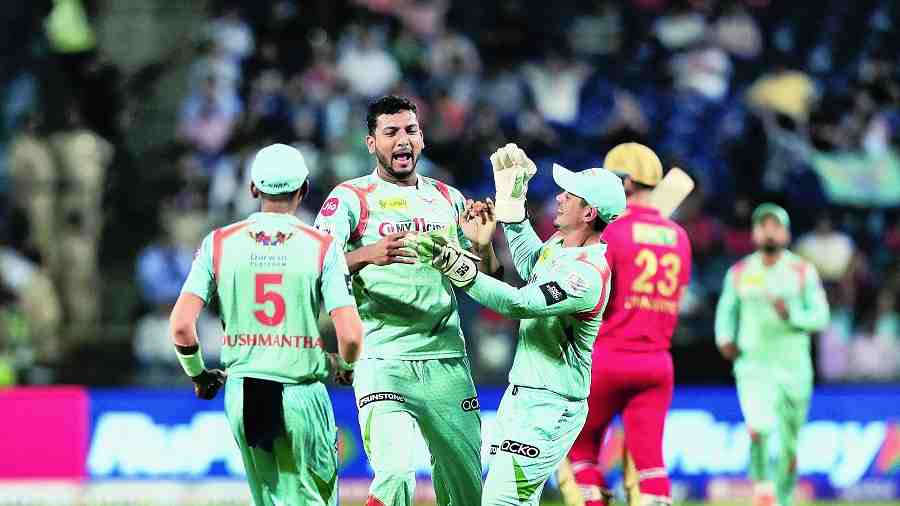 Mohsin Khan celebrates with teammates after dismissing Punjab Kings’ Liam Livingstone, one of his three wickets, in Pune on Friday.
PTI
Indranil Majumdar   |   Published 30.04.22, 02:30 AM

In the star-struck world of IPL, Quinton de Kock and Krunal Pandya are considered lesser mortals who do not possess the charisma to draw crowds into the stadium. But when it comes to seeking success, the duo have been much sought after.

Much like their Mumbai Indians days, De Kock and Man of the Match Krunal played their roles to perfection as newcomers Lucknow Super Giants coasted to their sixth victory in nine matches at the MCA Stadium in Pune on Friday.

While De Kock laid the foundation of their innings with a 46 off 37 balls, Krunal stifled the Punjab Kings chase with a superb exhibition of accurate bowling. The left-arm spinner led the Super Giants’ turnaround with figures of 4-1-11-2 in the middle overs.

It was Mohsin Khan, the young left-arm pacer from Uttar Pradesh, who provided a vital blow by removing Liam Livingstone in the 13th over. Mohsin also lent the finishing touches with two more wickets in the slog overs.

In between, Dushmantha Chameera got Jonny Bairstow to pay for an ambitious shot when 51 were required off the last five overs in their chase of 154.

The way the Super Giants turned this match around was ample evidence that they mean business. They defended a small total with discipline and determination to come up trumps by 20 runs.

One of the main reasons for Mumbai Indians’ success has been the contribution of De Kock at the top of the order. Lucknow are now benefiting from his presence.

On Friday, undeterred by the early loss of KL Rahul, De Kock went about his task in unbridled fashion. After punishing Kagiso Rabada for two towering sixes, he provided the momentum in the company of Deepak Hooda.