‘Please don’t forget that our bowling unit has been doing exceedingly well, and been consistent on most occasions’ 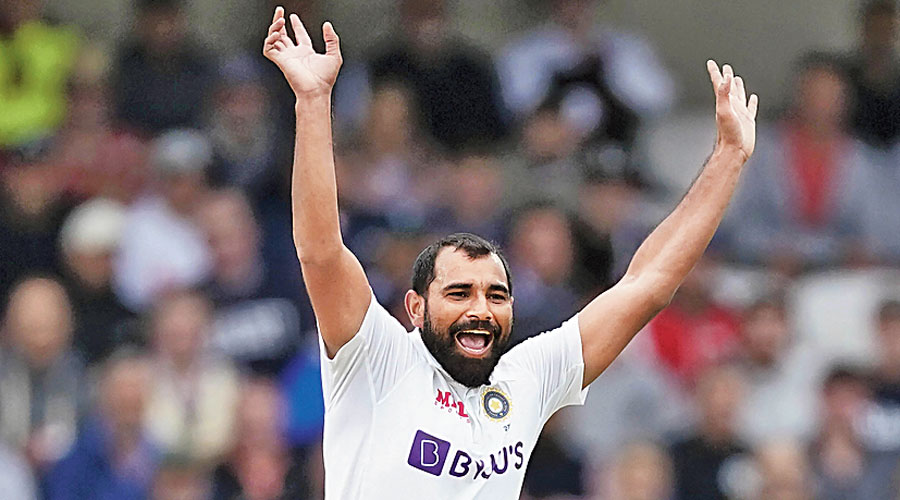 Mohammed Shami, an integral part of India’s famed pace bowling attack, has conceded that “loose batting” did let the team down in South Africa, and had the bowlers been given another 50-60 runs to defend, the result could have been different.

India lost the Test series 2-1 after winning the first match in Centurion.

“See, we’ve been playing on a fairly regular basis and been part of bubble life for quite some time now. So summing up the overall situation, I would only say that ups and downs happen, and we just don’t need to get too hyper or worry too much about it,” Shami told The Telegraph from his residence (at Sahaspur in Amroha) in Uttar Pradesh on Tuesday.

“Please don’t forget that our bowling unit has been doing exceedingly well, and been consistent on most occasions. So this is one huge positive that always keeps us in the game.

“Yes, our batting may have been a bit loose at times, due to which the team has suffered.

Shami, though, refused to buy into the idea that conditions in Johannesburg and Cape Town becoming easier for batting was a prime reason for India’s defeat in the Test series to South Africa.

“Whether it’s momentum or the conditions, they are all part of the game. At the end of the day, what counts is the result.

“So I don’t think we should be blaming the conditions and look for an excuse. You can’t control nature. So we need to point out the mistakes we made,” Shami, who finished with 14 wickets in the Tests against the Proteas, said.

“But yes, if we had some 50-60 more runs to defend, we certainly could’ve had a greater chance of winning those two games,” he added.

The focus now is on India’s next Test captain after Virat Kohli stepped down from the post following the unexpected loss to South Africa. Shami, however, believes that if individuals are more responsible and concentrate on their own performances, it should make the new captain’s job easier.

“Of course, the team needs a leader (in Test cricket). Good that our first series (under the new captain) will be at home (against Sri Lanka next month), so familiarity with the conditions brings in some sort of a relief.

“But if you ask me, I will be focusing more on how Ifare and how the bowling unit performs as a whole. I’m really not thinking about who takes over the captaincy. We have Rohit (Sharma), while Ajinkya (Rahane) is there as well, but all that matters is the result.

“It’s up to the individuals to focus more on their own performances and take bigger responsibility, as that leads to the results we expect,” Shami asserted.

The pacer, who has 209 wickets from 57 Tests so far, was severely trolled on social media after India’s 10-wicket hammering against Pakistan in their T20 World Cup opener in the UAE last year. Kohli, skipper then, had stood firmly behind Shami, calling the trolls “spineless”.

Now, Shami too has hit out at the haters. “Well, we don’t even know if the identities of those trolls are real.

“Besides, they wouldn’t have stooped to such level had they really been Indians. Real Indians will never react in such a manner if we lose a few matches. So it’s best to ignore trolls,” he signed off.