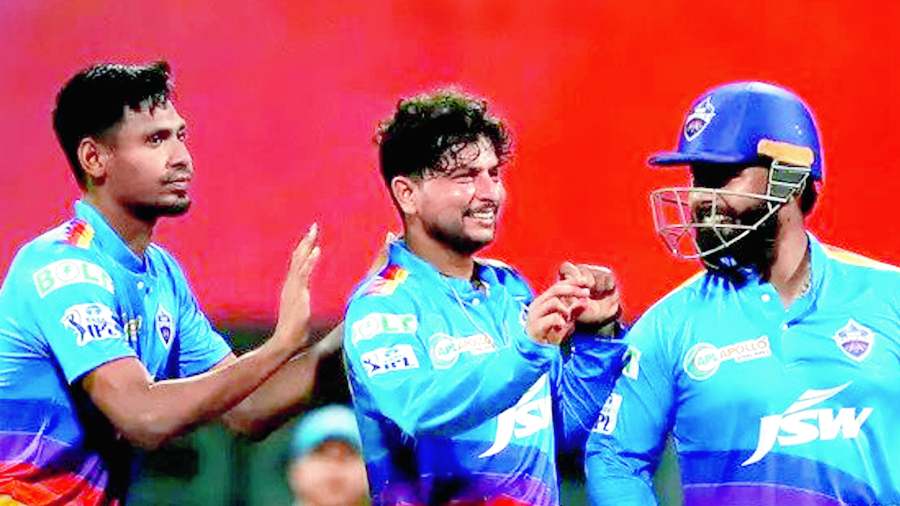 Kuldeep Yadav (second from left) celebrates with teammates at the Wankhede on Thursday.
IPL
Sayak Banerjee   |   Published 29.04.22, 01:13 AM

Former Knight Kuldeep Yadav (4/14 in 3 overs) foxed Kolkata Knight Riders (KKR)  once again, this time at the Wankhede in Mumbai on Thursday.

And just like the comprehensive win Delhi Capitals had recorded against the Knights at the Brabourne Stadium in the first meeting between them this season, they again registered a comfortable four-wicket victory.

After his 4/35 played a crucial role at the Brabourne, the left-arm chinaman bowler took yet another four-for that restricted his former team to a modest 146 for 9. Thereafter, led by Umesh Yadav (3/24), the Knights did their best to make a match of it, but the Capitals ensured they hold their nerves and not panic. Rovman Powell and Shardul Thakur stitched an unbroken 37-run seventh wicket stand that took the Capitals home with an over to spare.

Alongside Kuldeep, left-arm quick Mustafizur Rahman (3/18) too did a fine job with the ball for Capitals and so did young Chetan Sakariya (1/17 in 3 overs), who bowled Aaron Finch out early on.

Kuldeep was spot-on in terms of his line and length, striking immediately after captain Pant brought him on to the attack. The Knights had already lost the struggling Venkatesh Iyer inside the fifth over after Finch’s inexplicable shot cost him his wicket. Kuldeep then hit them again by having Baba Indrajith perish at the deep before trapping Sunil Narine lbw with a straighter one off the next ball. From 35 for 4 in the eighth over, captain Shreyas Iyer (42) and Nitish Rana (57) consolidated innings.

But Kuldeep dashed their revival hopes. Bowling it a bit wider, he first dismissed the KKR skipper by inducing a bottom-edge off the latter’s blade, which was nicely snapped up behind the stumps by Pant. And then, Kuldeep churned out another straighter one to have Andre Russell stumped for nought.

One may wonder as to why Pant didn’t let Kuldeep and Sakariya complete their quota. At 83 for 6 in the 14th over, the Knights looked down and out, but three overs from part-timer Lalit Yadav and an extra over from a misfiring Shardul allowed Nitish and Rinku Singh (23) some easy runs in the slog overs.

To speak of the Knights, barring Rana and Rinku’s late efforts, their innings was a tale of poor application and attitude. If Finch and Venkatesh’s dismissals were a case of the duo not applying themselves, what led to Russell’s departure was a clear case of his questionable attitude.

Agreed, he’s aggressive and that’s how he’s at his best. But attempting an audacious heave, especially after having just arrived at the crease with his team in trouble, wasn’t really required.