Five-time champions have now lost six matches in a row, which is their worst run ever in the tournament 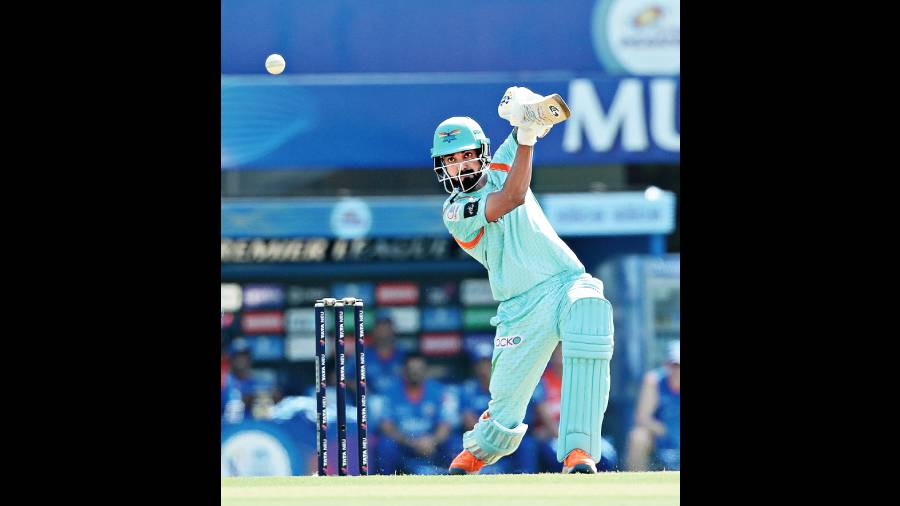 Lucknow Super Giants captain KL Rahul during his unbeaten 103 against Mumbai Indians at the Brabourne Stadium on Saturday.
PTI
Our Bureau   |   Published 17.04.22, 01:49 AM

The landmark game brought the best out of KL Rahul as his unbeaten 103 in his 100th IPL appearance was central to Lucknow Super Giants’ 18-run win over Mumbai Indians at the Brabourne Stadium in Mumbai on Saturday.

In reply to Lucknow’s 199 for 4, Mumbai could manage 181 for 9 with captain Rohit Sharma (6) failing with the bat once again.

Five-time champions Mumbai have now lost six matches in a row, which is their worst run ever in the IPL. Their chances of making the play-offs now become even more difficult.

But what appears to be a bigger concern for Mumbai is their inability to find out what exactly is going wrong with them.

Rahul and his Lucknow teammates wouldn’t complain though. Put in to bat on a good surface, Rahul made optimum use of Mumbai’s bowling frailties.

Agreed, Rahul unleashed some wonderful cuts, pulls and slog-sweeps while also playing the drives to superb effect when the Mumbai bowlers pitched the ball up and erred in terms of length. But what worked very much in Rahul’s favour was the absence of a strike bowler, barring Jasprit Bumrah, in the Mumbai line-up.

Left-arm quick Jaydev Unadkat and spinner Murugan Ashwin did try their best, but the others only made run-scoring easier for Rahul.

Alongside Rohit, Ishan Kishan’s terrible form at the top is also hurting Mumbai.

For Rahul, the unbeaten century was indeed a “special” knock. He also credited the likes of Avesh Khan (3/30), Jason Holder (1/34) and Ravi Bishnoi for being clear about their plans while bowling.

“It’s certainly a special hundred on a special day. I wasn’t amongst runs going into this game, but the pitch was quite good and I just made the most of it,” Rahul, who will turn 30 on Monday, said.