As the Gujarat side won the Indian Premier League title in Ahmedabad on Sunday, Pandya showed that he is cut out for the big matches 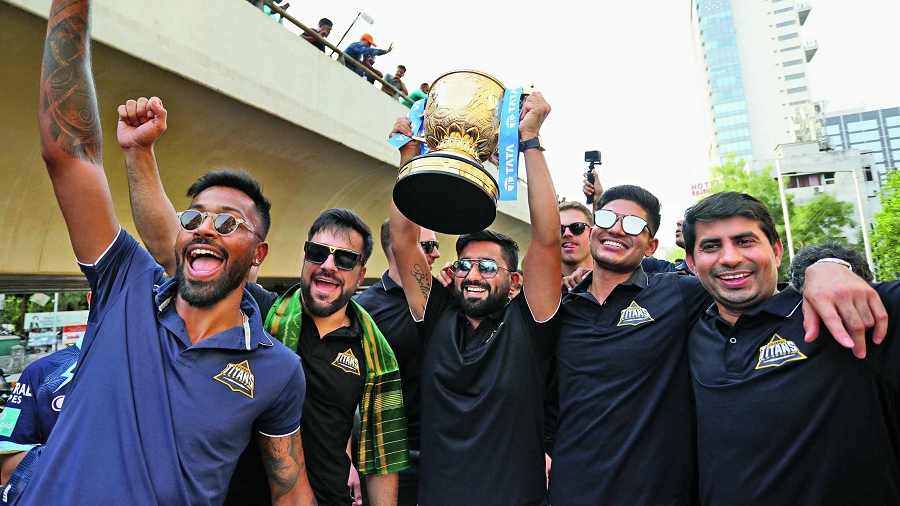 Pandya with (from left) Rashid Khan, Rahul Tewatia, Shubman Gill and other members of the team & staff during the roadshow in Ahmedabad
Gujarat Titans
Indranil Majumdar   |   Published 31.05.22, 01:04 AM

Days before the IPL hosted the mega auction, CVC Capital Partners, the owners of Gujarat Titans, were uncertain about getting the requisite clearance because of their alleged links with betting companies overseas.

It, however, didn’t stop them from chalking out their core group of backroom staff and the players as they got down to business furtively. The BCCI’s all-clear took time because of some legal formalities but CVC had been verbally told to go ahead with their groundwork.

As a first step, CVC roped in Peter Griffith, a former director of operations at IMG, in an advisory role. The UK-based Griffith had been involved in the IPL from its inception in 2008 till 2015, when he quit the global management firm. IMG executed the running of the IPL till earlier this year when the BCCI decided to part ways.

Griffith worked closely with Matthew Wheeler, CEO, AW Capital, a sports firm in the UK. When Vikram Solanki resigned as head coach at Surrey to be the director of cricket at the Titans, the ball was set rolling. There were murmurs that they wanted to have former Team India head coach Ravi Shastri on board but nothing transpired.

In their bid to have someone with a vast knowledge and passion for Indian cricket, they zeroed in on Ashish Nehra as head coach. Gary Kirsten also joined the support staff as mentor to provide experience and depth.

Thus began their journey to recruit a bunch of players who dared to lose or weren’t afraid of making mistakes in search of attaining the next level. The support staff were hell bent on shunning star culture and wanted a bunch of dedicated and fearless cricketers suited for this format.

Before the auction, they finalised Hardik Pandya, Rashid Khan and Shubman Gill as their draft picks for the IPL. There’s no doubt that the team management gambled big time on the Baroda all-rounder as captain. There were serious question marks over Pandya’s fitness and he had been demoted from Grade A to C in the BCCI contracts.

None was aware of his fitness status as he trained with his personal instructor in Baroda until Rahul Dravid requested the National Cricket Academy to run a fitness check on all probable India T20 specialists before the IPL. Pandya passed the gruelling Yo-Yo test at the NCA and it signalled he was in good shape.

As the Titans won the IPL 2022 title in Ahmedabad on Sunday, Pandya showed that he is cut out for the big matches. His biggest impact was with the ball — three wickets and he finished with a better economy than even Rashid.

“I saved the best for the best (stage),” Pandya declared later.

No doubt the experience of being part of Mumbai Indians’ IPL winning teams on four occasions helped him. The way he took responsibility, batted at No.4 and inspired his teammates to bring out their best was testimony to their success.

“I always enjoy responsibility. It gets the best out of me,” the Titans captain said.

The Titans worked hard before the auction and concentrated on including impact-making bowlers. The presence of the experienced Mohammed Shami and promising Yash Dayal provided them with the options, not to speak of Lockie Ferguson.

Fast bowlers like Shami always concentrated on pitching it up while keeping the option for picking a wicket open rather than tying a batsman down. Even the young left-arm spinner Sai Kishore formed a good combination with Rashid.

Changes to the batting order proved to be a masterstroke for the Titans. Getting Wriddhiman Saha to open with Shubman changed the dynamics of their batting. They could play Matthew Wade at No.3 and his enterprising strike-rate allowed the momentum to be maintained.

Then there was David Miller and Rahul Tewatia. The South African had been ridiculed before this IPL for his failure against the spinners. Ditto for Tewatia who didn’t show consistency for Rajasthan Royals in the past.

But the Titans trusted them and gave them a long rope. Words of encouragement and constant backing from the team management gave Miller the confidence to deliver.

Fear of failure never haunted the Titans players. They were told that mistakes were bound to happen and clarity of roles allowed them to prosper. It showed IPL titles are not won at auctions but through sheer planning and trust.

Patidar pads up for red-ball dream