Bumhrah takes three wickets to complement his fifer in the first innings, Ashwin gets four 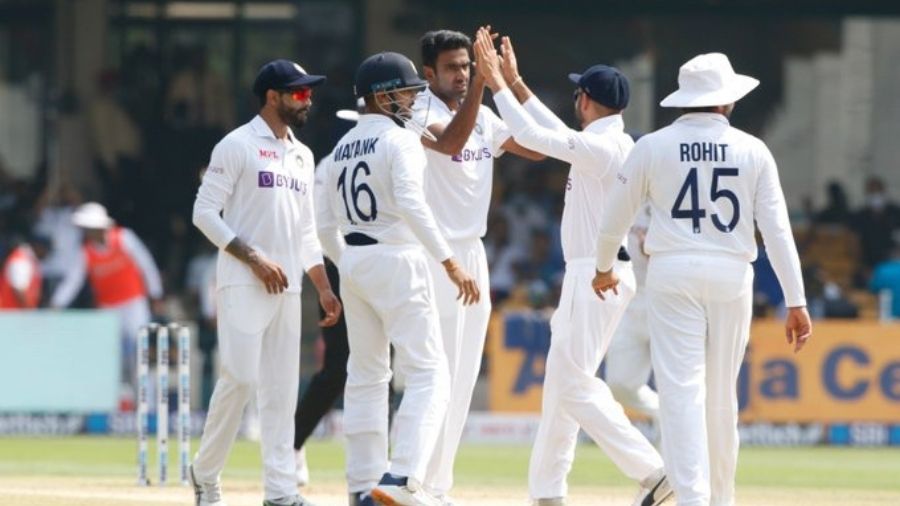 India extinguished whatever little spark Sri Lanka showed and wrapped up the second Test inside three days for a comprehensive 238-run win, completing a 2-0 whitewash of the Islanders, here on Monday.

A herculean task at hand, Sri Lanka took the field on the third day with a lot of determination but it was always going to be tough to negotiate the Indian attack on a track that has been offering turn and uneven bounce from day one.

Resuming at 28 for one in pursuit of an improbable 447-run target, the Sri Lankan batters, led by skipper Dimuth Karunaratne (107), resisted the Indian attack for some time before folding for 208 in the post-tea session.

"It's been a good run, and I have enjoyed it personally and as a team. We wanted to achieve a few things as a team, and we have done that," skipper Rohit Sharma said after leading the team to a perfect result in his first series at the helm.

He spoke about the positives that emerged from the two-match series.

"We have seen Jadeja grow as a batter, and he seems to get better and better. Shreyas just carried on from where he left off in the T20 series against Sri Lanka. He knew he was stepping into the big shoes of guys like Rahane and Pujara, but he has everything that he requires. Rishabh seems to get better with each game that he plays," the skipper waxed eloquent.

Left-handed Karunaratne, one of the most consistent performers for Sri Lanka in recent times, raised his 14th Test century with a boundary off Jasprit Bumrah. He took some time to settle but worked the ball around swiftly, consistently placing them in the gaps.

Bumrah (3/23) eventually sent him back with slightly seaming ball that beat his bat to shatter the stumps. The lethal Indian fast bowler, who consistently made life tough for the Lankans, returned with match figures of 8 for 47, having taken a fifer at home for the first time in the first innings.

India now have won all three pink-ball Tests at home, having beaten beating Bangladesh (in Kolkata, 2019) and England (in Ahmedabad, 2021) before.

Two wins against Sri Lanka fetched India 24 points but Rohit Sharma's men remain in fifth position in World Championship table due to 'low percentage points' (54.16). They have 77 points in their kitty.

Visitors' early positive intent, something which has not been witnessed much in this series, resulted in a rare productive batting session for the Lankans who collected 123 runs for loss of three wickets.

Adopting a positive yet cautious approach, both Kusal Mendis (54 off 60 balls) and Karunaratne used their feet with confidence to counter the Indian spinners.

Mendis was impressive on both front and back foot as he pulled and cut the short-pitched stuff and used his feet to cut down the spin.

Karunaratne too charged down the wicket, following a similar plan but Mendis was more expressive.

Mendis completed his fifty with a single off Jadeja but was beaten by flight on an Ashwin delivery and was stumped by Rishabh Pant.

That brought about the end of their fighting 96-run stand for the second wicket.

From there on, it was a downward slide for the visitors. Jadeja cleaned up Angelo Mathews (1) and Ashwin had Dhananjaya de Silva (4) caught at forward short-leg.

Karunaratne was ruled caught behind by umpire off Jadeja but the Lankan skipper survived, using DRS with replay showing that the ball had kissed the thigh pad and the bat before reaching Pant's gloves.

He completed his fifty with a single off Axar, who replaced Ashwin from the pavilion end.

A small partnership began to develop between Karunaratne and Dickwella (12) even as Mohammed Shami troubled the batters with his pace.

Axar broke the 55-run stand when he had Dickwella stumped and also sent back Charith Asalanka (5) by having him caught in backward short leg, where skipper Rohit Sharma took simple catch.

Like the first innings, Dickwella did not build on a start.