Viewed as a like-for-like replacement for Ravindra Jadeja, Axar’s current form with the ball bodes well for India going into the T20 World Cup 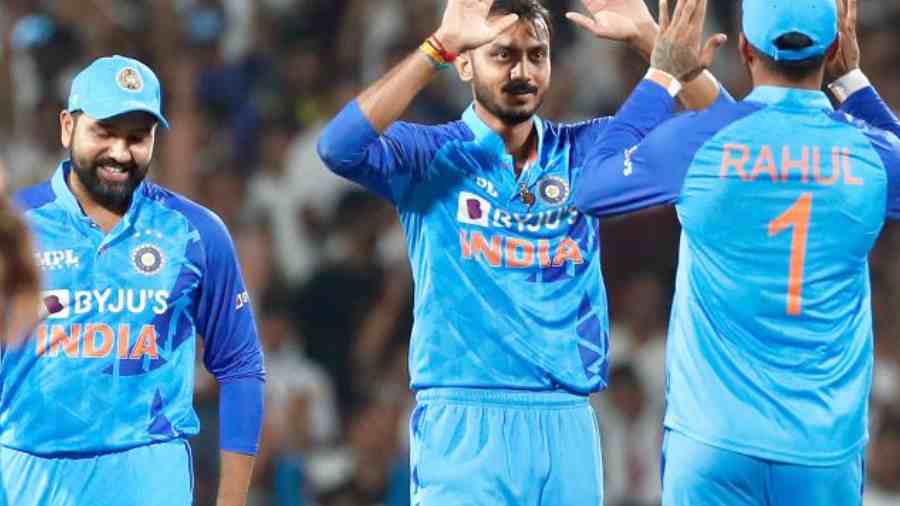 10-0-63-8. For a spinner to finish with such overall figures in a three-match T20I series, that too in conditions offering little assistance to bowlers, is certainly no mean feat.  That’s exactly where Axar Patel needs to be lauded.

Obviously, captain Rohit Sharma’s swashbuckling knock in Nagpur, Suryakumar Yadav’s pyrotechnics, and Virat Kohli’s determined effort with the bat in the decider in Hyderabad had big roles to play in India’s come-from-behind series win against Australia.

A fair analysis, though, would only underpin the importance of Axar’s efforts with the ball which turned out to be game-changing in all three matches. Besides, in all these games, he came on to bowl inside the first six overs and in a situation when the other bowlers (including some bigger names) were being carted to all corners by the Australian batsmen.

And on each of those occasions, he not just took the responsibility given to him by Rohit, but made sure to give India a much-needed breakthrough as well. “In T20 cricket, you may have to bowl and bat in any situation. So you need to be prepared for that,” the leftarm spinner told teammate Suryakumar in a video posted on bcci.tv.

Viewed as a like-for-like replacement for all-rounder Ravindra Jadeja, who’s out injured, Axar’s current form with the ball bodes well for India going into the T20 World Cup, which begins in a few weeks’ time in Australia. India may well miss Jadeja’s ability with the bat and his brilliance in the outfield, but bowling-wise, Axar’s performances of late do go on to show how superbly consistent he has been.

It isn’t very easy for a spinner to take 20 scalps in his last 10 limited-overs appearances, something Axar has been able to do. Did the Indian team management miss a trick by not including Axar in those two key Asia Cup Super Four clashes against Pakistan and Sri Lanka, especially on a Dubai pitch that wasn’t as batsmen-friendly as those used in the just-concluded home series? Mindset & maturity  In terms of mindset, Axar appears to be in a far better place alongside gaining more maturity, believes former India fielding coach R. Sridhar.

“Mindset has a big, big role to play. Axar seems to have got an assurance that he’s as good as a confirmation in the side for the next four to five years, and that seems to be reflecting in his performance,” Sridhar told The Telegraph on Monday.

“He always had the skills to deliver even in white-ball cricket and importantly, he knows what he has to do and what he can do. That shows how he has matured as a bowler,” Sridhar added. Former national selector Sarandeep Singh, too, acknowledged Axar’s growth in terms of his maturity.

“In Axar’s first few years in limited-overs cricket (since his ODI debut in June 2014 till late 2017), he used to try and bowl too fast at times. “But at present, he ensures that he varies the pace, keeps it slow when needed, and hardly gives any flight as that’s not his strength. Basically, he’s much more aware of what his strength actually is, which is bowling the stump-to-stump line consistently,” Sarandeep reasoned.  “If Axar keeps following this pattern in Australia, he has every chance of attaining further success.”