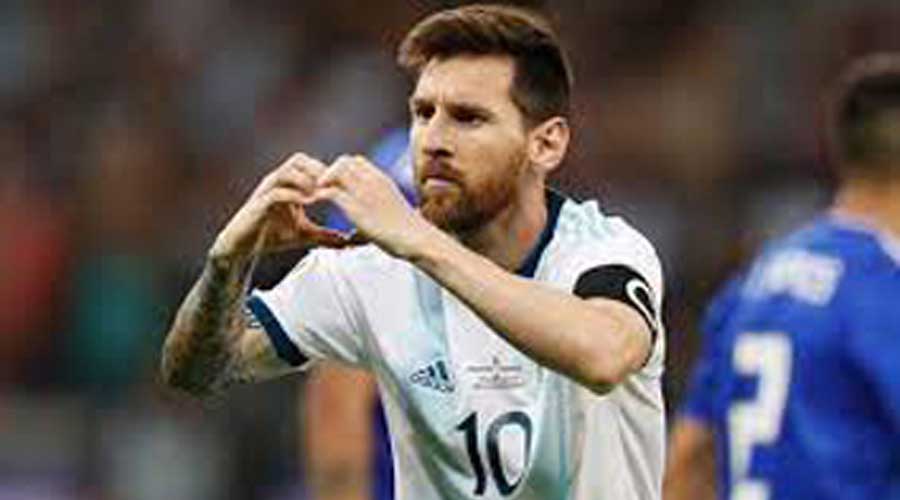 Argentina’s Lionel Messi curled in one from a free-kick to score a spectacular goal in the first half but Eduardo Vargas equalised for Chile in the second to leave honours even at 1-1 in their Copa America opener in Rio de Janeiro on Monday.

When the two sides met in a World Cup qualifier earlier this month, Chilean goalkeeper Claudio Bravo acrobatically saved one Messi free-kick and another hit the woodwork, but this time the Barcelona talisman prevailed, curling a superb set piece into the corner of the net from 25 metres out after 33 minutes.

Missing Alexis Sanchez through injury, the Chileans battled back to equalise 13 minutes into the second half in rather fortunate circumstances after a VAR consultation led to them being awarded a penalty kick. Arturo Vidal’s powerful shot was superbly tipped on to the bar by Emiliano Martinez but Vargas followed up to head home the rebound.

In the other match, in Goiania, Paraguay went behind to an early penalty but scored three times in the second half for a 3-1 win over Bolivia, who were reduced to 10 men just before halftime in their Copa America opener on Monday.

Bolivia were awarded a penalty through VAR for handball and Erwin Saavedra converted low to the keeper’s left.

The game swung Paraguay’s way in added time at the end of the first half when 19-year-old Bolivian forward Jaume Cuellar was sent off for a second yellow card offence. Paraguay dominated from the restart and two goals from Angel Romero and one from Kaku gave them full points.

Brazil’s health ministry has documented 41 cases of Covid-19 related to the Copa America, including 31 players or staffers and 10 workers who were hired for the event. The ministry said in a statement that all workers who tested positive were in Brasilia.