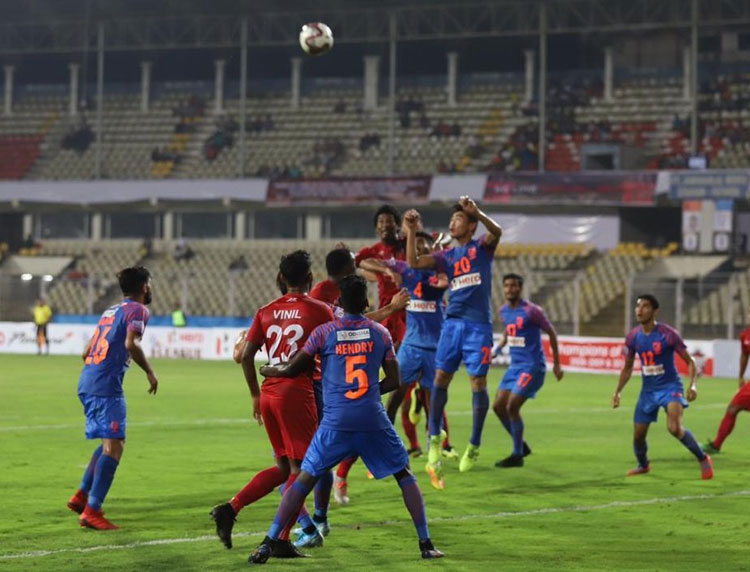 Players of Indian Arrows and Churchill Brothers tussle for the ball in the I-League encounter between two teams at the Fatorda Stadium in Margao
(Picture: @ILeagueOfficial)
TT Bureau   |   Calcutta   |   Published 28.12.19, 11:24 PM

Indian Arrows came from behind to defeat Churchill Brothers FC 2-1 at the Fatorda Stadium in Margao in what has been the first upset of the I-League.

East Bengal, thus, end the year at the top of the league table with eight points from four matches.

The substitutes of the Arrows proved to be the game-changers in the team’s first victory in four matches, while for Churchill Brothers, this was their first defeat in three games. Givson Singh of Arrows was adjudged the Man of the Match.

The first attempt came within five minutes of kick-off. Arrows captain Vikram Partap Singh made a run down the left flank, but the cross from him went straight to the Churchill Brothers ’keeper.

Churchill, though, didn’t have to be on the back foot for long as they were rewarded for their repeated attempts. Minutes before the half-time, a beautiful set-up by Israil Gurung found an unmarked Abu Bakr who headed in.

Arrows equalised in the 78th minute when a cross from Aman Chetri was smashed into the back of the net by Givson.

It looked as if the match would end in a draw, but a misunderstanding at the back between Junior Primus and James Kithan gave Arrows the winner, as substitute Suranjit Singh capitalised on the offer and scored for the visitors in the 90th minute.