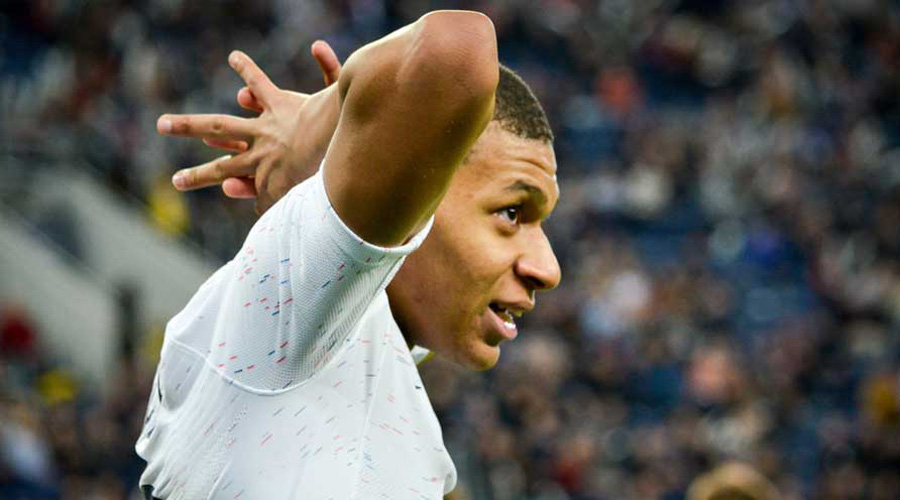 Paris Saint-Germain’s Kylian Mbappe said he felt no pressure in facing one of the world’s best keepers in Bayern Munich’s Manuel Neuer on Wednesday and hoped to add to his tally after beating the German twice in their 3-2 Champions League win.

On a snowy evening in the Bavarian capital, Mbappe scored an early opener for PSG and Marquinhos put them 2-0 up in the 28th minute before Bayern hit back through Eric-Maxim Choupo-Moting and Thomas Mueller.

The 22-year-old Mbappe then scored again, drilling in from a tight angle and with two defenders in front of him to put PSG back in front and hand Bayern their first Champions League defeat in more than two years.

Mbappe said he relished the chance to test himself against Neuer.

“I love to play against the best player in the world and Manuel Neuer is one of the best keepers in the history of the game,” Mbappe said. “I don’t have any pressure.”

PSG had lost to Bayern 1-0 in the Champions League final last season but are now one step closer to knocking out the title holders ahead of the second leg at home on April 13.

“We played in the final against him (Neuer) and didn’t score but now I scored two goals,” added Mbappe. “I will play one (more) time against him so I hope to score again.”

It was the first ever loss for Bayern coach Hansi Flick, who had been unbeaten in his previous 16 matches in Europe’s premier club competition.

“I am happy with the result and the attitude of the team, who found themselves in difficult situations against the best side in Europe,” PSG coach Mauricio Pochettino said. “We need to congratulate the players for their sacrifice and we want to repeat this kind of performance. Ninety more minutes to play. It is a good result but the return leg will be difficult. We know that,” he added.

Despite defensive mistakes, the Germans will still be wondering how they failed to earn at least a point with 31 goal attempts to PSG’s six, 15 corners to one and a string of golden opportunities.

Flick rued his team’s missed chances after the match. “Obviously, our opponents scored three goals from their few chances and we scored too few but the way we played was impressive,” Flick told reporters. “We could have gotten a good result but we were not efficient enough. I do not like to lose but I am satisfied with how we played. The team fought on the pitch for the entire 90 minutes.”

The Bavarians  dominated for long stretches of the game, missed a bagful of chances. “Unfortunately, we were not as decisive in front of goal as we normally are,” Flick said.

Bayern could be without injured Niklas Suele and Leon Goretzka, who were both taken off in the first half, for the second leg.