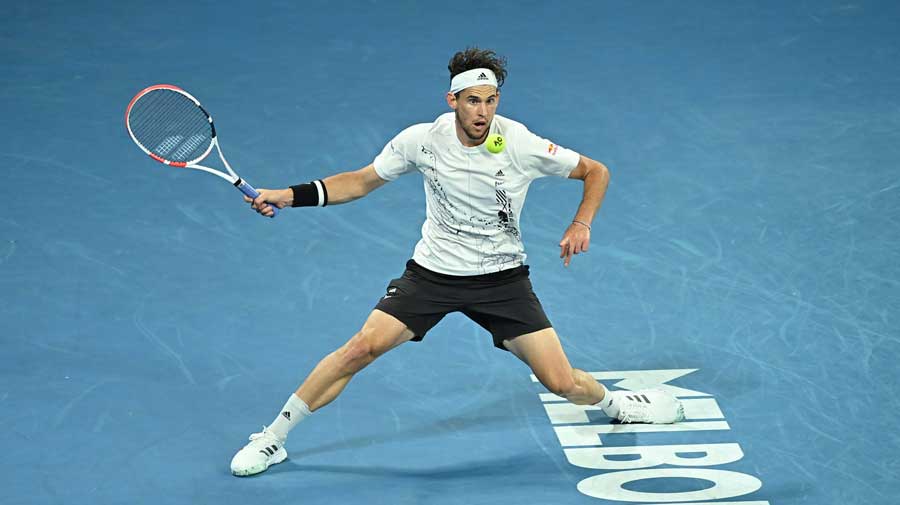 The fans at Melbourne Park on Friday should consider themselves lucky since a snap five-day lockdown in the state of Victoria from midnight means the next five-day’s action at the Australian Open will be without any crowd presence.

Specially those at the John Cain Arena, who got to see a match for the ages as Dominic Thiem produced a thrilling comeback to overhaul a fired-up Nick Kyrgios in a five-set classic.

In the rather aggressive atmosphere of Kyrgios’s favourite arena, US Open champion Thiem dragged himself off the canvas in a 4-6, 4-6, 6-3, 6-4, 6-4 win over the Australian showman to reach the fourth round.

The Austrian third seed was shell-shocked for the first two sets, barely able to contain Kyrgios, who channelled the crowd’s energy to produce some electrifying tennis.

But Thiem transformed from timid to terrific as his serve revived, and he lived to set up a battle with Grigor Dimitrov for a quarter-final spot after sealing the match with a majestic backhand down the line.

Top seed Novak Djokovic survived a major injury scare as he battled past American Taylor Fritz 7-6 (7-1), 6-4, 3-6, 4-6, 6-2. Defending champion Djokovic, seeking a ninth title in Melbourne, looked in command when he took the opening two sets but began to suffer with a side injury early in the third set.

He needed to leave Rod Laver Arena to have treatment and was grimacing in pain at times as the 23-year-old Fritz took advantage to take the next two sets.

Second seed Simona Halep eased past Russian Veronika Kudermetova 6-1, 6-3 to enter the fourth round. The twice Grand Slam champion feasted on the Russian’s serve, breaking her opponent three times in the first set and another three times in the second.

The 29-year-old was broken twice but pounded 21 winners past her error-prone opponent and served out reasonably comfortably for the win after an hour and 18 minutes.

Naomi Osaka swept into the fourth round with a 6-3, 6-2 victory over Ons Jabeur in front of one of the last crowds allowed at the Open.

Osaka pounded down eight aces as she dominated her first career contest against the Tunisian world No. 30.

Serena Williams was already on court when news of the snap lockdown came in. It was a distraction neither Serena nor her opponent Anastasia Potapova would have wanted. Serena completed a 7-6 (7-5), 6-2 win in the sunshine at Rod Laver Arena then gushed about her daughter Olympia learning tennis in the on-court interview.

The tournament will proceed without crowds over the next five days after the state of Victoria was placed under a snap lockdown to contain a fresh outbreak of Covid-19.

State Premier Daniel Andrews announced the measures after the highly transmissible strain of Covid-19 linked to Britain infected 13 people in Melbourne. Fans would be excluded from Saturday. The players will enter a bio-secure “bubble” from Saturday.