Hazlewood has reasons to feel more upbeat when it comes to bowling to Virat Kohli, who would be available only for the first Test, for having dismissed him thrice in the ODI series 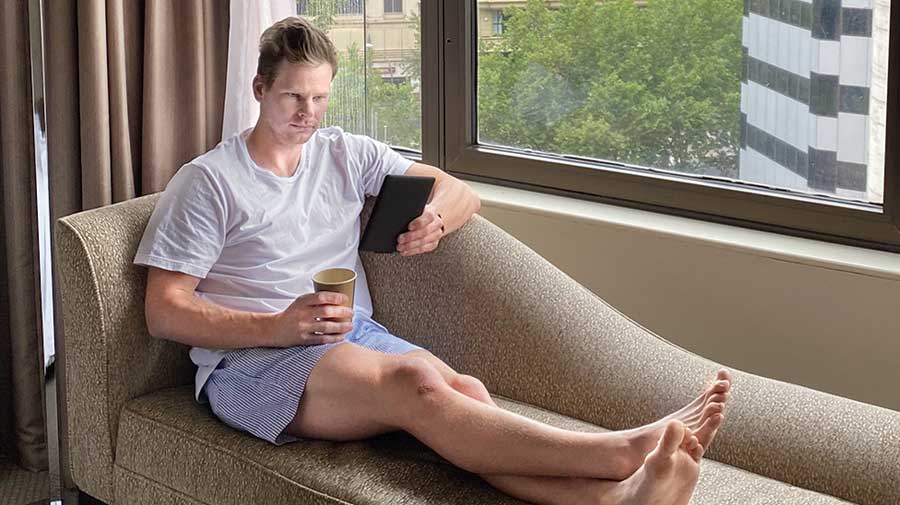 Steve Smith in a Twitter picture on Sunday. “Even when preparing for a Test match it’s important to have a little downtime and switch off, even if it’s just for an hour over your Sunday morning coffee,” said the Australian star.
Twitter/@stevesmith49
Our Bureau   |   Calcutta   |   Published 14.12.20, 02:22 AM

India may well feel very confident about dealing with the extra bounce on Australian tracks but the hosts will still use the short ball to intimidate the visitors in the four-Test series.

“At different times, yes, the short ball will be used as a tactic. The bouncer strategy is here to stay. It is a part of the game and is going to hang around for sure.

“It’s probably a tactic all the time in Australia with the sort of bounce and pace our wickets have compared to other countries,” pacer Josh Hazlewood was quoted as saying by a cricket-specific website.

“The wickets can also be quite flat from time to time. So if we are not getting results on the front foot, we will challenge the batsmen at different times with the bouncer and a leg-side field. That’s always been a part of the game here, probably from both sides.”

Hazlewood, among the Australia bowlers, has reasons to feel more upbeat when it comes to bowling to India captain Virat Kohli, who would be available only for the first Test, for having dismissed him thrice in the ODI series.

Of course, that’s a different format, but having said that, Kohli couldn’t quite dictate terms against Hazlewood even in the two ODIs where he got 50-plus scores.

Speaking about his battle with Kohli, Hazlewood said: “I have had some luck against him of late in the white-ball format. So you take a little bit of that into the next format.

“That said, it’s a fresh start and a different story again with the pink ball. He scored some runs against us last time with the red ball and I think it’s crucial to start well against him.”