India stand at five for no loss ahead of dinner break 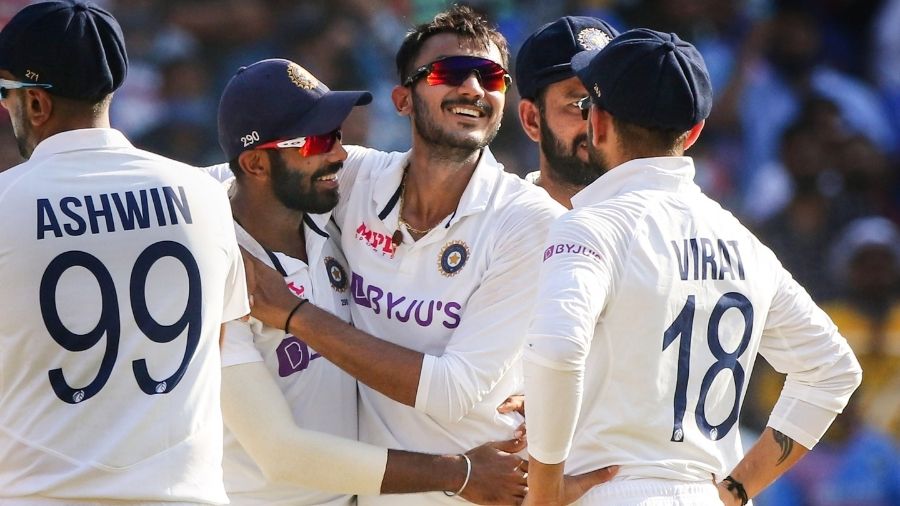 The Motera Stadium on Sunday witnessed a Ashwin and Axar Patel show as the duo bamboozled the England batsmen to complete the submission.
PTI
Our Bureau, Agencies   |   Ahmedabad   |   Published 24.02.21, 07:24 PM

Indian spinners shot England out for just 112 inside two sessions with Ravichandran Ashwin and Axar Patel sharing the spoils after pacer Ishant Sharma opened the floodgates in his milestone 100th match on the opening day of the day-night third Test here on Wednesday.

Openers Rohit Sharma (5 batting) and Shubman Gill (0 batting) negotiated five overs to take India to five for no loss at the dinner break.

Gill, however, survived after the TV umpire ruled him not out in the third over after England claimed a catch.

Ishant, only the second Indian fast bowler after Kapil Dev to play in 100 Tests, fittingly took India's first wicket in the third over as he dismissed opener Dominic Sibley for nought.

Thereafter, it was all Ashwin and Patel show as the duo bamboozled the England batsmen to complete the submission, except for the other opener Zak Crawley, who hit an eminently delectable half-century. Six English wickets fell in the second session.

England did not have any substantial partnership with the 47-run stand for the third wicket being the highest. They lost their last seven wickets for just 38 runs.

Crawley's brilliance was, however, neutralised by the Indian spinners as England were left reeling at 81 for 4 going into tea after an exciting opening session in the pink ball Test.

Two wickets fell in as many overs after the resumption of the second session, with Ashwin and Patel taking one each, to reduce England to 81 for 6.

Ashwin sent Ollie Pope's (1) off-stump cart-wheeling with a beauty of a delivery, bowling round the wicket, before Patel trapped Ben Stokes (6) LBW in the next over with a ball that spun in.

Jofra Archer (11) did a tad better as he hit a four in the second ball he faced and another boundary off Ashwin. But, Patel had him soon, cleaning up his off-stump to send England innings into a mess.

England's rapid slide continued with Jack Leach edging one to the gully where Cheteshwar Pujara took a low catch off Ashwin, though the TV umpire took time to confirm the decision.

Crawley's effort was the only silver lining for England. Having missed the first two Tests due to a freak wrist injury, the stylish right-hander's driving was elegance personified as he hit 10 boundaries during his 84-ball 53.

Earlier, playing his landmark 100th Test, Ishant couldn't have hoped for a better start when he got a delivery to hold its line and bounce a shade extra, which Sibley edged to Rohit Sharma at second slip.

Axar, brought in as early as in the seventh over, struck with a delivery that came in with the arm and Jonny Bairstow (0) was adjudged leg before, leaving England at 27 for 2.

However, Crawley was in no mood to play the defensive game and made most of what always is the best time for batting in a pink ball Test. His half-century had 10 boundaries and came off 68 balls.

Captain Joe Root was the second highest scorer with a 58-ball 17 before Ashwin got his crucial wicket with a delivery that turned a shade.

Crawley, who had tried the reverse sweep without much success, was accounted for by Axar when he played for the away turn.