After 4 hours 48 minutes, birth of a giant slayer 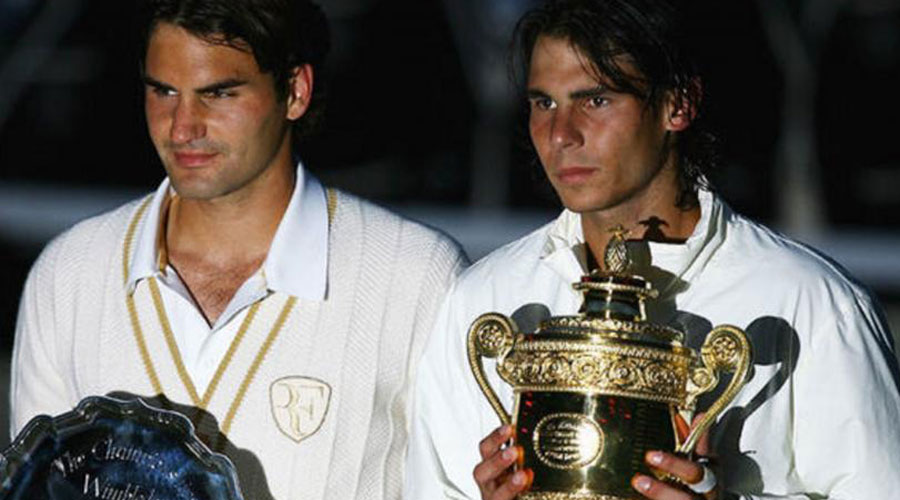 “Very happy to be in this final… I’ll play against the best player of the world and the best player here on grass and I have to play my best tennis all day… if I have chances for a win,” a then 22-year-old Rafael Nadal said, before stepping on to the Centre Court of Wimbledon for his third bid at the title. His opponent — Roger Federer, the five-time reigning champ who had beaten him the past two years.

July 6, 2008, was the setting of what many tennis pundits describe as the “greatest match ever played”. Spaniard Nadal had just beaten the Swiss Federer in Paris for his fourth consecutive French Open crown four weeks ago. But here, at the hallowed grass courts, 26-year-old Federer had his sights set on a sixth consecutive title, to go one ahead of Bjorn Borg, who sat in the royal box.

Clouds and rain stalked the final the entire day, but Nadal wasn’t too worried about the weather conditions. “The rain is for both,” he shrugged it off.

Federer, the then world No.1, was his usual calm self, and in perfect shape. He had reached the final without losing a set and dropping only two service games. He dropped his third of the 2008 championships in the third game of the first set. Nadal broke Federer but as he would later say in Rafa: My Story, “there was a long road ahead”. Both engaged in well-constructed rallies, none ready to let one ball past. They would race up to the nets and then back to the baseline, with Nadal once striking the ball backwards from between his legs, to the spectators’ applause. Federer had a few chances to break back but the hard-fought set went to Nadal 6-4.

Nadal had a 11 to 6 win-loss record against Federer. But the world No.1 wasn’t one to give up easily. He won the first game of the second set without losing a point, broke Nadal and then took the game on his own serve to go 3-0 up. Soon it was 4-1 Federer. But Nadal upped his game, broke Federer and then played some outrageous shots to take the second set 6-4.

Could Federer come back from two sets down? He won the first game of the crucial third set comfortably. Then came a game of nerves at 3-2 on Nadal’s serve — Federer had four break points but couldn’t convert. At this point, Federer had converted only one of 12 break points, while Nadal broke him thrice out of four times. The mood was dark, but more so were the clouds overhead. Nadal was looking sharp but then he too squandered break chances. He was two points from serving for the Championships, when at 4.51pm local time the first of the rain breaks came. Back to court a little after 6pm and a full warm-up later, Nadal served to save the set. He managed to do so twice and the third set went into tiebreak, which Federer clinched with clinical aces and big forehands. The match was well and alive.

Shots flew across the court in the fourth set, which Nadal called “maybe the best set we played in the final”. He was holding his service games; Federer, serving second, didn’t give away much. Both players unleashed their best shots at each other, answering every forehand and every backhand, while the crowd — oscillating between shouts of ‘Rafa’ and ‘Roger’ — was in raptures after every point. On a Federer serve in the tie-break, Nadal went a crucial point up to 5-2, celebrating with a tiny fist-pump. He had the title in his sights, he had the next two points to serve and if he held it’d be his. Then he made a double fault. A few points later, Federer won the set 10-8.

In what the commentators called “a fantastic baseline duel”, both players played most part of the final set with no breaks in serve. Serving at 2-2, Federer got a challenge wrong, Nadal got his next right and it was 30-all. After an ace and a poor volley took Nadal to deuce, rain interrupted the match for a second time — at close to 8pm local time — and the players stepped off the court for 30 minutes. Back to serve, at 2 sets all, 2 games all, Federer hit two aces. They had about an hour to close the match.

Nadal started his service game with a forehand winner down the line and came through with Federer only getting in one point. And so it went on, till Federer was up 5-4 with his big serve. Suddenly, Federer was a game away from No.6 but a forced error took the set to 5-5.

It was already the longest men’s final in 28 years but it was also getting close to that time when play could be called off for the night at 9.30pm. At 7-7, the Championship referee decided there would only be two more games and then the match would have to continue on Monday. But by then, Nadal had the momentum. He won that game with a few overhead shots, celebrating exuberantly with a punch in the air — matched by his team in the box.

Either player needed a two-point advantage to win the title. Federer saved himself twice with his ace and forehand but Nadal finally broke him, as one of his forehands went just beyond the baseline. New balls were called in and Nadal was ready to serve for the 2008 Wimbledon Championship.

The nervous No.2 lost the first point but got in the next with his first serve and volley of the match. He got his third Championship point when Federer sent a cross-court shot wide. On the next play, Federer returned a backhand cross court which Nadal could barely touch. Deuce. Taking back advantage with what was his final ace of Wimbledon 2008, Nadal sent in his final serve. Federer hit it into the net. Nadal won 6-4, 6-4, 6-7 (5-7), 6-7 (8-10), 9-7. “There is a new man at the helm of men’s tennis — Rafael Nadal,” the commentator said, as the Spaniard fell to the grass and then ran to shake hands with his rival and friend.

John McEnroe, who commentated for US television, later told BBC Sport: “To me, it was the greatest match I’d ever watched, the greatest match ever played anywhere.” Borg, who had defeated the American in the 1980 final, called it “the best tennis match I’ve ever seen in my life”.

In the end, it was Nadal’s night: He had become the first man since Borg in 1980 to have won the French Open and Wimbledon in the same year. He was also the first Spanish man to win at Wimbledon since Manuel Santana (also in the royal box) in 1966. The King of Clay finally had had a bite of the Big (W) Cup.