Here are 7 big hitters to choose from 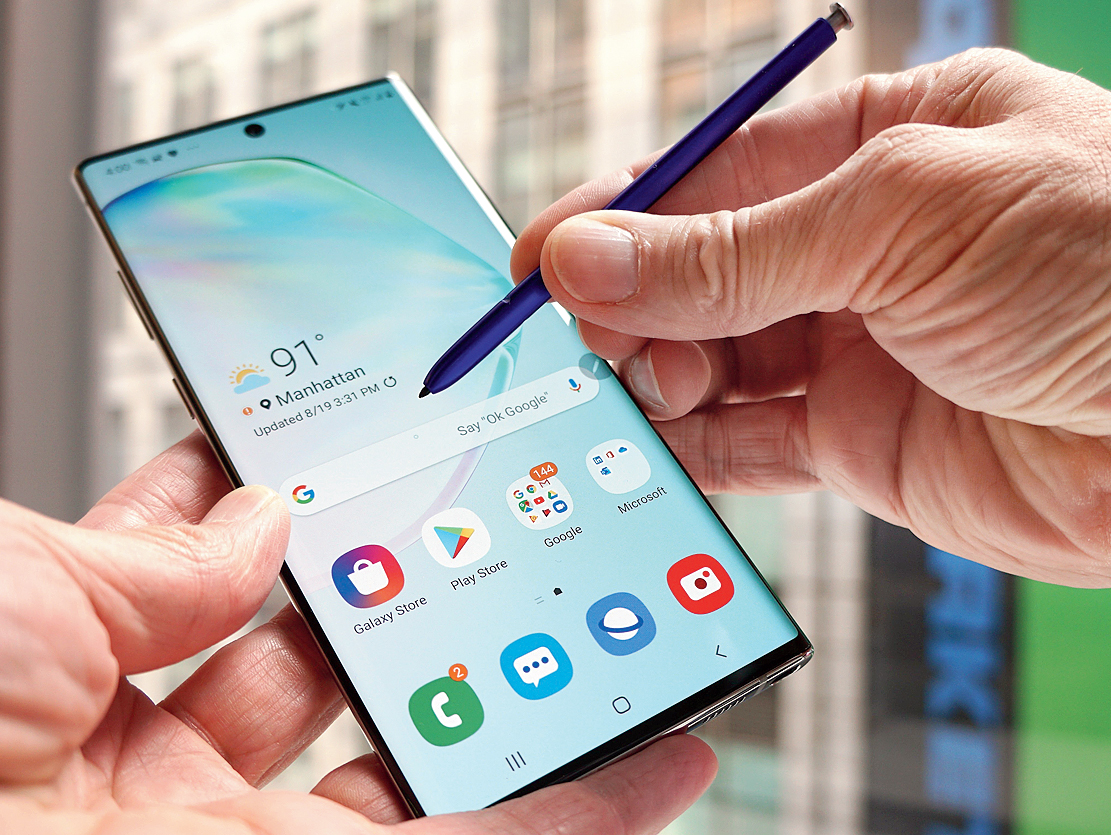 If paper reminds us we are physical beings in a virtual world, the stylus makes us think about the correct words to put down and to think twice about what we say. The S Pen has gained plenty of tricks on the new Note. With Air Actions one can change camera modes simply by swiping the stylus in the air while pressing down the button on it or zoom in an out by making a circular motion. Taking productivity to a new level is Samsung’s collaboration with Microsoft. The phone comes with the YourPhone app, which mirrors Android text messages, notifications, and even your entire screen to a Windows 10 PC. In way of cameras, it’s almost unchanged from the Galaxy S10+, which is a good thing. At the same time, the Note10+ has become the best Android phone for taking videos. The live focus in videos allows the user to blur out the background and video stablisation has been improved a great deal.

Who said premium devices cannot be enjoyed by all? OnePlus has changed the way premium and ultra-premium smartphones are perceived. Earlier in the year the company had released the OnePlus 7 Pro with industry-leading fluid display sporting 90Hz refresh rate. The technology is very much there on the 7T. And the phone is just perfect for vloggers. The company has equipped it with three cameras. Besides the high-resolution 48MP primary camera, there is also a 117-degree ultra-wide camera and a telephoto camera. They work together seamlessly. A lot of professional vloggers use a gimbal to keep things steady. OnePlus has added Super Stable which uses a brand new ultra-precise gyroscope and a powerful built-in stabilisation system. With the feature turned on you get great steady videos.

This is as much a fun camera phone now as it was when we set our eyes on it in April. Sexy outside and the inside, the big feature on the phone is the camera set-up. The P20 Pro had three cameras on the back with a 3x optical zoom. The P30 Pro adds a ToF (time of flight) camera, which makes all the difference in portrait shots. It joins the main 40MP camera and a 20MP ultrawide angle camera (besides the 8MP telephoto shooter). The sensor can draw a depth map of one’s environment, which takes photography to a new level, especially in portrait mode and the bokeh shot. And the phone looks stunning even though many new phones have come out since.

Apple has perfected the smartphone’s camera. The most distinguishing feature of the new phone is the three-lens camera on the back, which are clustered in a stamp-like shape. The iPhone 11 Pro has the two lenses of the iPhone 11 — a wide angle and ultra-wide angle lens (with a 120-degree field of view), both use 12MP sensors. Plus, a telephoto lens. The wide-angle lens has an f/1.8 aperture, the ultra-wide has a f/2.4 aperture, and the telephoto has an f/2.0 aperture. And there is a Night mode that comes on automatically in low-light situations, prompting you to hold a shot for one, two or three seconds. Even in dimly-lit restaurants pictures come out very well, without losing any details. And all the new iPhones let you record 4K video at 60 frames per second, offering high-res stuff with remarkably smooth motion. Pricing is a relative issue but one thing is for certain — Apple has made zero compromises on the build and technology.

With a powerful 64MP quad camera set-up paired with an equally capable chipset, Redmi Note 8 Pro is a powerhouse. The octa-core Helio G90T mobile platform brings unprecedented gaming capability and a full HD+ 16.5 cm Dot Notch display with a 19.5:9 aspect ratio headlines the front with thin bezels across all sides. Keeping the device alive all day long is a 4,500mAh battery (18W charger in box). And this is India’ s first smartphone to launch with Amazon Alexa built-in. It is also the world’s first smartphone with Dual Wake which allows the device to interact with both Google Assistant and Amazon Alexa simultaneously.

HMD Global, the home of Nokia phones, has delivered a phone that comes very close to the Pixel 3a. It’s the first Nokia smartphone to combine a triple camera and PureDisplay. Nokia 7.2 features a 48MP triple camera with quad pixel technology and ZEISS optics. Also present, a range of ZEISS bokeh styles that are exclusive to Nokia smartphones. Whether you want to get all your friends in one shot or capture immersive scenery Nokia 7.2 comes with an ultra-wide camera which has a 118-degree field of view and up your selfie game with the AI-powered front camera setup, consisting of a 20MP camera with ZEISS optics. And with a dedicated Pixelworks visual processor, Nokia 7.2 upscales video content to HDR quality in real time, with up to a billion shades of colour, higher contrast and expanded dynamic range. At the heart of the device is Snapdragon 660.

Google Pixel 3a and 3a XL

No, Pixel 4 is not coming to India, at least for the moment. But that shouldn’t stop you from enjoying the two affordable devices from Google. Like the standard Pixel 3, the OLED displays on the two models don’t stretch to the top and there is a chin but the displays are as sharp as any of the top devices in the market. The loudest talking point of any Pixel device is its camera system, which has software features powered by artificial intelligence and machine learning. The same camera features are found on the devices that come with 5.6-inch and 6-inch displays. And making the camera stand out is a software mode called Night Sight, which makes photos taken in low light appear as if they had been shot in normal conditions, without a flash.