When the West becomes dependent on the East 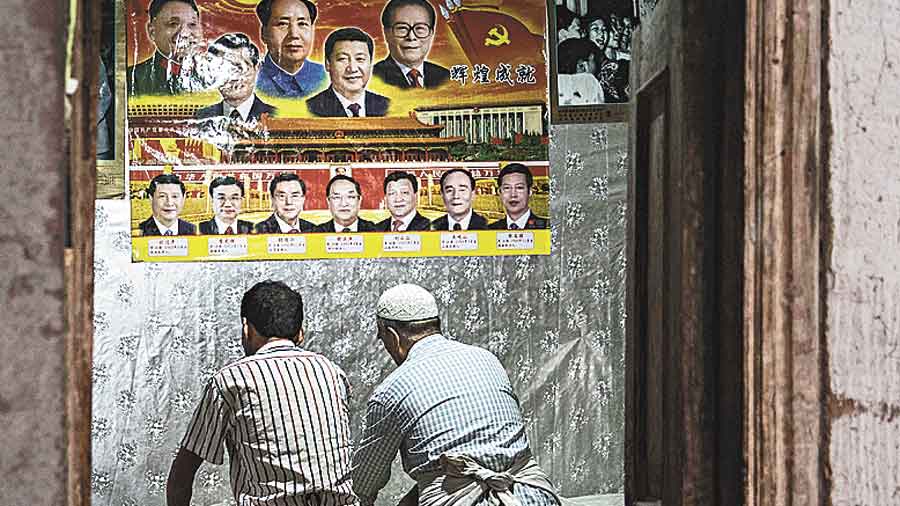 Under a poster showing Chinese leaders including the late Mao Zedong and the present President Xi Jinping, ethnic Uyghur men make bread at a local bakery on July 1, 2017 in the old town of Kashgar, in the far western Xinjiang province, China.
Getty Images
Timothy Garton Ash   |   Published 20.08.21, 12:05 AM

On YouTube, you can watch a video clip of Volkswagen’s chief executive, Herbert Diess, denying that he knows what’s going on in Xinjiang. When the BBC correspondent helpfully spells it out — so-called ‘re-education camps’ for one million Uighurs — the VW boss says, “I’m not aware of that.” Either he was culpably ignorant about a region where VW has a factory or he was lying.

This was in spring 2019, and a company spokesman soon declared that Diess was “of course aware” of the situation in Xinjiang. The case is particularly sensitive because Volkswagen was originally set up by the Nazis and its use of forced labour during the Third Reich has been scrupulously documented by German historians.

It is interesting to compare his response with a statement made earlier this year by the president of the Board of Deputies of British Jews to coincide with Holocaust Memorial Day. “As a community, we are always extremely hesitant to consider comparisons with the Holocaust,” Marie van der Zyl wrote in a letter to the British prime minister. But, she went on, there are similarities between what is reported to be happening in China and what happened in Nazi Germany in the 1930s and the 1940s. The violations of the human rights of the Uighurs are “shaping up to be the most serious outrage of our time”.

Volkswagen is also significant in another way. It is an example of a Western company that has become so dependent on the Chinese market that it can hardly do without it. China accounts for more than 40 per cent of Volkswagen’s global car sales. Whatever the exact calculations that led VW to open its relatively small plant in Xinjiang in 2013, it seems clear that to close it down now would negatively impact its whole relationship with the Chinese regime on which its entire business in the country depends. The company has got itself stuck between the rock of Xi Jinping and the hard place of an increasingly outraged Western public opinion. The result could be a moral car crash.

Behind this leading Western company that is too dependent on China is a leading Western country that is at risk of becoming too dependent on China. Under the chancellor, Angela Merkel, China has risen to be Germany’s largest single trading partner. Her likely successor, Armin Laschet, the Christian Democrat candidate for chancellor, currently heads a federal state, North Rhine-Westphalia, which has a large stake in economic relations with the East Asian dictatorship. Every week, many giant container trains pull into the city of Duisburg, which bills itself as the Western land terminus of Beijing’s Belt and Road Initiative. Despite pressure on Berlin from the Joe Biden administration in Washington, everything Laschet has said so far in the German election campaign suggests the continuation of a soft, business-first German-China policy. Without a change in German-China policy, there will be no coherent European-China policy.

To be clear: this is not just about Germany. Coca Cola also has a factory in Xinjiang. Wall Street firms are piling into Chinese markets wherever they can. British bankers, lawyers and estate agents have for years been falling over themselves to service Russian oligarchs, Chinese apparatchiks and Central Asian tyrants. France would love a larger slice of the action.

In the original Cold War, the West was never economically dependent on the East (then meaning the Soviet bloc). On the contrary, in the later years of the East-West conflict, several East European states became heavily indebted to the West. That hastened their downfall. In this new Cold War — or Hot Peace, if you would rather — the West is already economically dependent on the East (now meaning China). In the 2000s, it was still just possible to believe in the possibility of ‘Wandel durch Handel’ (Change through Trade). But when the German economics minister, Peter Altmaier, said last year, “I still believe that change can be achieved through trade,” it sounded like the ideological platitude of a bygone era. In the last decade, China has done more trade, become more repressive and acquired more leverage over the West. So who has changed whom?

Although it is a dangerous illusion to believe that economic interdependence necessarily prevents international conflict, we certainly do not want a world of competitive autarkies. Western democracies do, however, need to ensure that they are not strategically dependent on China. We had a taste of such dependency in the early months of the Covid pandemic when we discovered just how much of our personal protection equipment came from China. If Huawei were to dominate our 5G networks, that would be a deep strategic vulnerability.

Our businesses must also accept the ultimate primacy of politics in a democracy. In the German Ostpolitik of the 1970s and 1980s, German trade and investment in the Soviet bloc served the country’s larger foreign policy goals. In Germany’s recent China policy, by contrast, the commercial tail has wagged the political dog.

As individual investors and consumers, we should include a broader concern about violations of human rights in our ESG (Environmental, Social and Governance) criteria for assessing companies. The German Parliament recently passed an admirable Supply Chain Act, which requires German companies to monitor human rights standards wherever they produce. It will be fascinating to see how VW responds to this.

Last year, the chief executive of Volkswagen Group China, Stephan Wöllenstein, said he is aware of the “allegations” in relation to Xinjiang (what a great leap forward in executive knowledge!) but that no forced labour is used in its factory or its local supply chains. Diess repeated this assertion in an interview earlier this year: “Neither we nor our suppliers employ forced labo[u]rers.”

As it happens, I drive a Volkswagen. It’s a perfectly good car, but I need to change it soon for one with a climate-friendly electric engine and there are plenty of other good makes. I am realistic. I don’t expect the boss of VW to speak out like some fiery human rights advocate. Back home in Europe, jobs, prosperity and the sustainability of our social model depend on those earnings from abroad. But next time a Volkswagen executive is asked about the Chinese camps, he or she could at least say something like this: ‘As a citizen, I am deeply concerned whenever I hear credible reports of human rights violations in areas where we do business. As a company, especially having in mind the early history of Volkswagen, our specific duty is to ensure that no violations of human rights are to be found in our supply chain.’ And then a group of reporters experienced in Chinese affairs should be invited to visit the VW factory in Xinjiang, talk to its employees and look in detail at its supply chain. History and conscience demand nothing less.