The way things are, if an asteroid were about to strike the Earth, the US would blame Iran 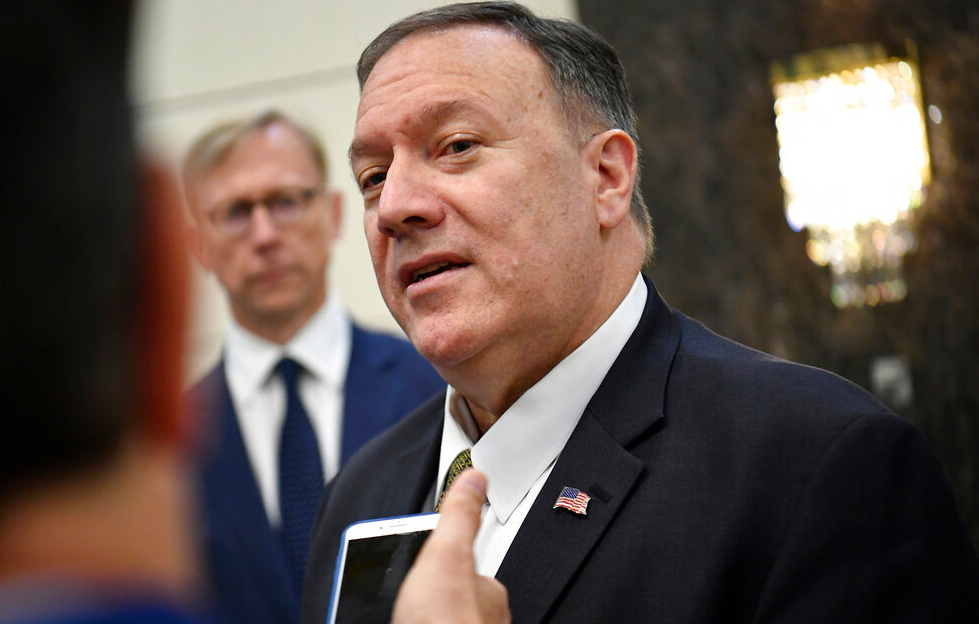 US Secretary of State Mike Pompeo speaks to the media before departing from al-Bateen Air Base in Abu Dhabi, United Arab Emirates, on Thursday, September 19, 2019. His confident attribution of blame to Iran for the attack on Saudi oil facilities is just politics, not proof
(AP)
Gwynne Dyer   |   Published 22.09.19, 07:48 PM

The secretary of state of the United States of America, Mike Pompeo, dismissed the Houthi claim that the Yemeni rebel group had carried out the strike on two Saudi Arabian oil processing facilities. There was “no evidence” that the drones belonged to the Houthis, he said. Instead, he blamed Iran. No surprise there. The way things are, if an asteroid were about to strike the Earth, the US would blame Iran. But there’s ‘no evidence’ that the drones came from Iran either. Pompeo is trading on the assumption that Yemenis are too ignorant to manage the technology, so it must be Iran.

Saudi Arabia and the alliance of other autocratic Arab States who have been bombing Yemen since 2015 push the same line all the time. It goes down fairly well in the Kingdom, where most people look down on Yemenis for being poor and less well-educated, but it isn’t actually true. In fact, the Yemeni air force had Scud missiles for decades before the government collapsed in 2015, and technicians to service them. Some, maybe most, of those technicians threw in their lot with the Houthis, and upgraded those Scuds by cutting them in half and inserting a larger fuel tank in the middle.

The ‘Super-Scuds’ were more a morale booster than a war-winner for the Houthis, who live under a merciless daily bombardment from the air (7,290 documented civilian deaths so far). The current attacks on the Saudi oil facilities, if the Houthis’ claim is true, would just be another morale booster, even though it has temporarily cut world oil production by around 5 percent. But was it really the Houthis? There is no clear evidence, but it could have been. They certainly have the motive, and they may have the technology. They have used small drones in previous air strikes, and bigger drones are available commercially that could do the damage seen at the Saudi facilities.

It would be quite a trick for the Houthis to acquire 10 drones (which is how many they say they used in the attack), but stranger things have happened. Or maybe they did get their hands on some military drones, which would certainly be up to the job. Or maybe it was Iran, but nobody really knows yet.

One apparent flaw in the Houthi theory is that there are no civilian drones capable of flying the almost 800 kilometres from Yemen to the Saudi targets, but that’s not really necessary. Most of the land around the Abqaiq and Khurais oil facilities is open desert, and launching the drones from 25-50 kms away would escape detection unless the Saudis were actively anticipating such an attack. Who would launch them? There are a million Yemenis resident in Saudi Arabia, plus millions of Saudi citizens who suffer severe discrimination because they follow the Shia version of Islam. There are even Sunni Saudi citizens (mostly Islamists) who are sufficiently disaffected to attack the regime directly.

That’s a pretty large pool to fish in if you’re looking for local collaborators to smuggle the drones in and launch them — which is what the Houthis themselves say happened. In their statement claiming credit for the attacks, they express thanks for “co-operation with the honourable people inside the kingdom”. None of this proves that it was the Houthis, or that it wasn’t the Iranians. It does leave the identity of the attackers up in the air, where it will remain until conclusive proof emerges one way or another. Mike Pompeo’s confident attribution of blame to Iran is just politics, not proof. As Iran’s foreign minister, Javad Zarif, tweeted, “having failed at max pressure (anti-Iran trade sanctions), Sec Pompeo’s turning to max deceit.” Fair comment.

We should be grateful that Donald Trump, for all his faults, is the grown-up in the house this time. He tweeted: “There is reason to believe that we know the culprit, are locked and loaded depending on verification, but are waiting to hear from the Kingdom as to who they believe was the cause of this attack, and under what terms we would proceed!” Trump doesn’t want a full-scale war with Iran, and neither does Saudi Arabia. It probably won’t happen.

All-out war if US or Saudis strike: Iran