The RSS chief, Mohan Bhagwat, may believe that BJP is merely a political wing that follows sangh's vision, but things changed since Modi took over as prime minister 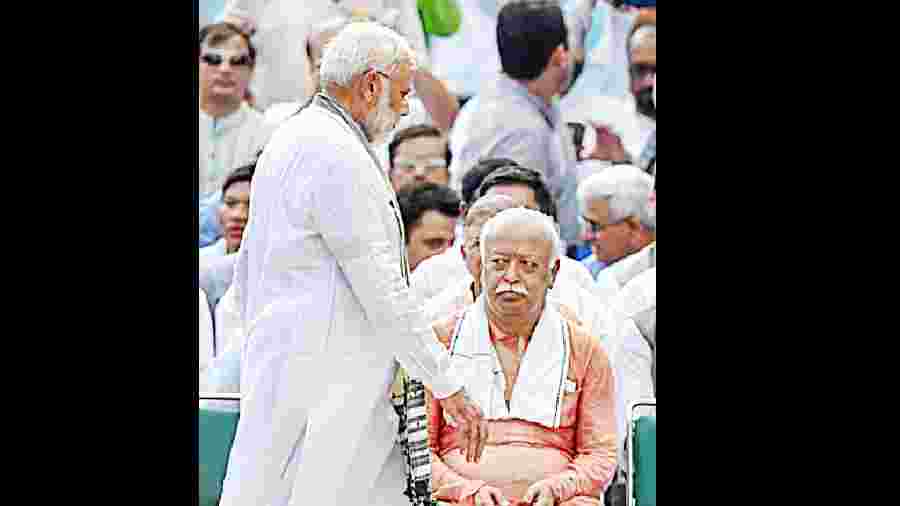 The RSS, which was so vocal during the days of Vajpayee and Advani, has gone into hibernation in the past eight years.
File photo
Sunil Gatade & Venkatesh Kesari   |   Published 30.08.22, 03:17 AM

The demotion of Devendra Fadnavis is only half the political story in Maharashtra, the other half being the subtle signal given to the Rashtriya Swayamsevak Sangh top brass not to overstep its brief. Before the 2019 assembly polls, the RSS had pitched for the accommodation of the Shiv Sena to avoid the division of the Hindutva vote. So ‘Operation Demolition Thackeray’ was also intended to demote the RSS top brass in the public eye. The signal that has been sent out is that Narendra Modi and Amit Shah have the sole authority to take political decisions.

The RSS chief, Mohan Bhagwat, may believe that the Bharatiya Janata Party is merely the political wing that follows the RSS’s vision. But much water has flown under the Ganga since Modi took over as prime minister. The BJP under Modi is no longer subservient to the RSS even though the powers that be at the Centre have not declared Nagpur to be part of the party’s margdarshak mandal comprising aged, uncared-for veterans. The relationship between the RSS and the BJP is so organic that it is often impossible to know what has transpired between the two entities. But developments in the past eight years have clearly shown that Modi and Shah have laid down the rules and that the RSS leadership is merely trudging along.

When the Atal Bihari Vajpayee government was in office, the RSS was a power to reckon with. In December 2005, L.K. Advani was forced to resign as the party chief because the RSS was unhappy with him over his controversial remarks on Muhammad Ali Jinnah during his visit to Pakistan. The RSS’s hand in decision-making was also visible when it vetoed the plans to make Jaswant Singh the finance minister.

The RSS, which was so vocal during the days of Vajpayee and Advani, has gone into hibernation in the past eight years. No one will say this aloud but a perception is gathering among those who watch and understand the saffron ecosystem that the RSS is now an also-ran. The sangh leadership at various levels and their causes are taken good care of by the ruling dispensation. This has apparently led to the creation of a ‘feel good factor’ that suits those in power.

Despite the Chinese incursions in Ladakh causing a huge controversy, the RSS has hardly spoken on this sensitive issue. This notwithstanding the fact that it has been projecting the need for robust national security. When the United Progressive Alliance was in power, Bhagwat was in the forefront alleging that the ‘weak’ policies of the UPA government had emboldened China and Pakistan to make repeated incursions into Indian territory across. But not much is being made out of the Chinese incursion by the RSS now.