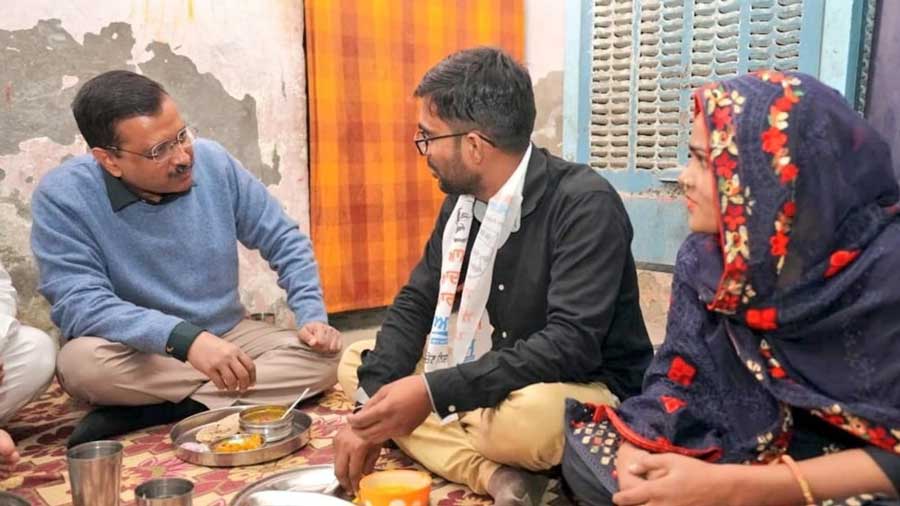 Arvind Kejriwal at the home of an auto-rickshaw driver in Punjab’s Ludhiana.
Twitter/@AamAadmiParty
The Editorial Board   |   Published 25.11.21, 02:17 AM

The breaking of bread may be synonymous with the Eucharist tradition. But the symbolic potency of the ritual transcends the realm of theology: indeed, it signifies a philosophical tenet. The sharing of food — this is what the breaking of bread symbolizes — is one of the markers of the inception of collective living. Communion with one another, made possible through food-sharing and then, gradually, through other kinds of participation, led to the germination of the community. The community, in turn, became the bedrock of civilization. The ability to exist as a collective was made possible by humanity’s willingness to recognize the importance — corporeal and spiritual — of such values as companionship, cooperation and empathy.

It can be argued that bread-breaking has undergone another transition in modern times. Competitive politics lies at the heart of this — regressive — transformation. These days, it is common for politicians of all hues to invite themselves to poorer households to share meals with citizens with meagre resources. The Bharatiya Janata Party, a master in embracing hollow populism, set the trend. Party leaders make a beeline for homes, ironically their occupants — farmers, Dalits and so on — lie on the margins of inclusion and welfare, whenever elections knock on the doors. The contagion has, since, spread. Rahul Gandhi has dined with the downtrodden; Arvind Kejriwal recently graced the household of a man who drives an autorickshaw in poll-bound Punjab. Even though the citizen and the leader share space and food in these, more often than not, orchestrated events, there is usually a great chasm that separates host and guest. Little wonder then that such events are followed by complaints that visiting dignitaries had broken their pledges: members of an impoverished Rajbanshi family in Bengal — they had hosted a Union minister in the run-up to the assembly elections — have now raised the all-too-familiar accusing finger, alleging betrayal by the BJP. On an earlier occasion, a former chief minister of Karnataka, again from the BJP, had been accused of partaking of food brought from a hotel on a visit to a Dalit home. The charade exposes a deeper, moral alienation. The breaking of bread, the ritualistic glue that made community members stick together through thick and thin, is now a register of the social and economic cleavages that separate citizens and collectives. There is food for thought in this for netas who depend on optics.