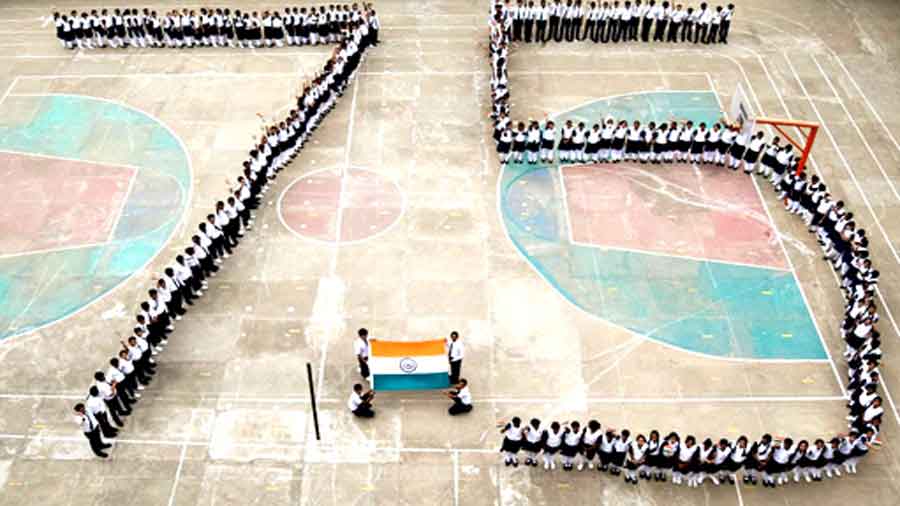 That the world is indeed looking at India — though not necessarily looking up to India — is confirmed by a reading of Aakar Patel’s book, Price of the Modi Years, which contains a list of global economic, social, and political indices and how our country fares on them. The low, sometimes lamentably low, position of India on almost all these indices suggests that what the world is finding out about us may be somewhat at odds with what the prime minister proclaims. Thus, for example, Patel reports that India ranked at number 85 on the Henley Passport Index, number 94 on the International Food Policy Research Institute’s Global Hunger Index, number 103 on the World Economic Forum’s Human Capital Index, and number 131 on the UN’s Human Development Index. On many of these indices, India’s position has slipped since Narendra Modi became prime minister in 2014.

What the world thinks of us is important. But what we think of ourselves is perhaps more important. On the eve of the seventy-fifth anniversary of our independence from British colonial rule, we should therefore ask ourselves: how is India doing? How are Indians doing? To what extent have we, as a nation and as a people, fulfilled the ideals set out in the Constitution and redeemed the hopes held out by those who fought for our freedom?

Back in 2015, I described India as an “election-only democracy”, by which I meant that while elections were regularly held, in between polls there was virtually no accountability. The Parliament, the press, the civil service, and so on, had become so ineffectual or compromised that they provided little or no check against the excesses of the party in power. Now, even that qualifier, ‘election-only’, seems hard to sustain. The opacity of the electoral bonds scheme, the alleged partisanship of the Election Commission, and the coercion and bribery used to topple elected state governments means that even elections are not wholly free or fair, nor are their results always honoured.

In recent years, the Indian State has become far more ruthless in its suppression of dissent. By the government’s own figures, between 2016 and 2020, more than 24,000 Indians were arrested under the draconian Unlawful (Activities) Prevention Act, of which less than 1% were actually convicted. The remaining 99% had their lives wrecked by a paranoid and ideologically-driven State apparatus. Attacks on the press have also further intensified; were Aakar Patel to update his book now, he would have India ranked at 150 instead of 142 on the World Press Freedom Index.

In this climate of repression, it is disappointing to report charges that the higher judiciary has often chosen to side with the State against the citizen. Thus, as Pratap Bhanu Mehta has recently written, “rather than being the guardian of rights, the Supreme Court is now a significant threat to it.” (https://indianexpress. com/article/opinion/columns/pratap-bhanu-mehta-by-upholding-pmla-­sc-puts-its-stamp-on-kafkas-law­ -8057249/) The constitutional scholar, Anuj Bhuwania, has spoken of the “complete capitulation of the Supreme Court to the majoritarian rule of Prime Minister Narendra Modi”. He adds: “During the Modi period, not only has the court failed to perform its constitutional role as a check on governmental excesses, it has acted as a cheerleader for the Modi government’s agenda. Not only has it abdicated its supposed counter-democratic function as a shield for citizens against state lawlessness, but it has also actually acted as a powerful sword that can be wielded at the behest of the executive.” (See https:// scroll.in/article/979818/the-crisis-of-legitimacy-plaguing-the-supreme-court-in-modi-era-is-now-hidden-in-plain-sight)

Indians are less than free politically speaking, and much less than free socially speaking. Seventy-five years after the British left these shores, our society remains deeply hierarchical. In 1950, the Indian Constitution outlawed caste and gender discrimination, yet they continue with a great deal of force. Although affirmative action has helped create a vibrant Dalit professional class, in many areas of social life caste prejudice persists. That there are so few inter-caste marriages so many years after B.R. Ambedkar called for the annihilation of caste is a marker of how conservative Indian society still is. As for gender, two statistics tell us how far below the ideal we remain. The first is the female labour force participation rate, which, at about 25%, is much lower than that in Bangladesh (let alone Vietnam or China). The second is India’s position on the Global Gender Gap index, where (as of July 2022) we rank 135th out of 146 countries surveyed all told, and lowest (146th) when it comes to health and survival.

From society I move next to culture and religion. The picture here is not particularly uplifting either. There are now increasing prescriptions, imposed both by the State and by vigilante groups, on what Indians can eat, what they can wear, where they can live, what they can write, and whom they can marry. Perhaps the most worrying of all is the demonisation of Indian Muslims in word and in practice. In India today, Muslims are massively under-represented in politics and the professions, discriminated against in the workplace and the marketplace, and taunted and mocked on television and social media. In their suffering and stigmatisation lies our collective shame.

From culture I turn to economics. Narendra Modi came to power promising to liberalise the economy further. In fact, he has returned to a form of protectionism that the reforms of 1991 sought to end. This inward turn has not even produced a level playing field for domestic enterprise — to the contrary, some favoured industrialists have benefited through what a former chief economic adviser to the Government of India has termed the 2A model of stigmatised capitalism. There has been a re-bureaucratisation of the State, with officials in the tax and customs departments (among others) handed back powers they had been made to part with. The burden of this renewed license-permit raj has been felt by small entrepreneurs in particular. Meanwhile, rates of unemployment are high, and the skill levels of Indian workers low.

The World Inequality Report 2022, compiled by a group of internationally renowned economists, estimated that in India, the wealthiest 1% of the population held 22% of the national income, whereas the poorest 50% held just 13%. In July 2021,Mukesh Ambani was worth $80 billion, a jump of $15 billion over the previous year. The growth in assets of Gautam Adani that year was even more spectacular — from $13 billion to$55 billion. (Adani’s personal wealth now stands in excess of $110 billion).Historically burdened with a skewed income and asset distribution, India is steadily becoming an even more unequal society.

Whether judged in quantitative or qualitative terms, the report card of ‘India at 75’ is decidedly mixed. To be sure, the burden for these failures cannot be laid at the door of the present government alone. The Congress under Jawaharlal Nehru may have nurtured democratic institutions and promoted religious and linguistic pluralism, but it should have shown more faith in Indian entrepreneurs as well as done far more to eradicate illiteracy and provide decent healthcare.Indira Gandhi proved herself an able leader in war-time, but her administration’s capture of independent institutions, its strengthening of State control over the economy, her own conversion of a storied political party into a family firm and the construction of a personality cult around herself grievously damaged our political life as well as our economic prospects. Narendra Modi may be both an entirely self-made as well as an extremely hardworking politician, yet his emulation of Indira Gandhi’s statist and authoritarian instincts, coupled with the majoritarian cast of his RSS-inspired worldview, has meant that historians will judge his legacy far more harshly than the bhakt brigade currently does.

In analysing this gap between promise and potential, we may look for explanations in the deeds (and misdeeds) of powerful and influential individuals and of the governments they led and directed. Or we might interpret the matter sociologically, in light of Ambedkar’s remark that “democracy in India is only a top-dressing on Indian soil, which is essentially undemocratic.” Perhaps seven-and a-half decades is too short a time to reverse or radically mitigate the myriad forms of unfreedom that define Indian culture and Indian history.

Either way, let us not be beguiled by the boastful claims made on our behalf by our leaders, claims that shall be amplified in the days to come. The world is not looking at India with admiration and wonder. Nor are those Indians who can see and think for themselves. For while India is a formally free nation, Indians are less than free politically, socially, economically, culturally, and institutionally.Much work lies ahead of us.