Editorial: Look ahead, not forward

Yet another lacklustre budget has come and gone 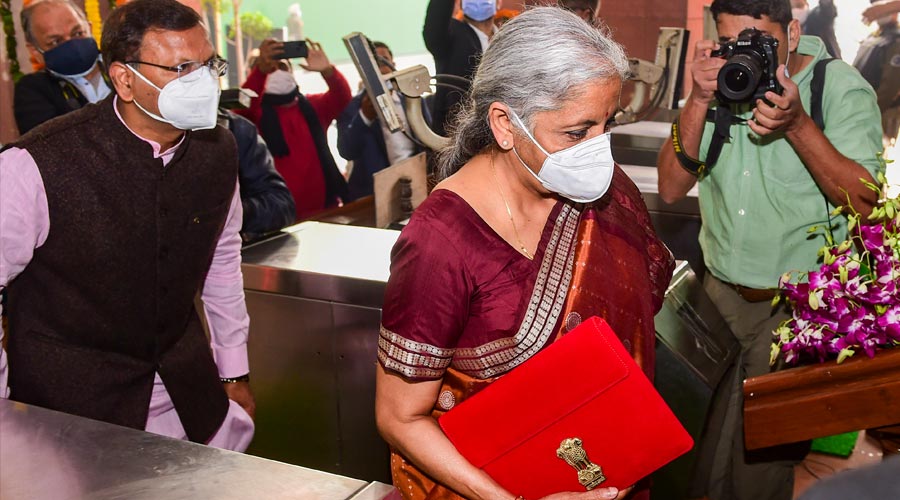 Union Minister of Finance Nirmala Sitharaman with MoS Pankaj Chaudhary arrives at Parliament for the presentation of the Union Budget 2022-23, in New Delhi, Tuesday, Feb 1, 2022.
(PTI Photo/Kamal Kishore)
The Editorial Board   |   Published 02.02.22, 12:21 AM

The Union budget for 2022-23 was noticeably lacklustre on at least two counts. There was very little boasting with numbers during the presentation as is the custom with finance ministers in India. The next was the indication of a hesitation as to whether the need for fiscal stimulus remains urgent, whether it is time to go back to business as usual, or whether public investment would continue to be the engine of recovery from the damage done by the pandemic. There was a lack of energy in Parliament reflected in the half-hearted thumping of tables from the treasury benches and the absence of loud interruptions by members of the Opposition.

Total expenditures went up from the revised estimates for 2021-22, but by around 4.6 per cent, which is less than the rate of inflation prevailing in the economy. Hence the real quantum of spending will be less than that achieved last year. On the allocation for capital expenditure though, the increase is to the tune of 24.5 per cent compared to the revised estimates of 2021-22. This spending is supposed to “crowd-in” private investments, according to the finance minister. Most of the major projects will be rolled out now. But the outcomes would not be discernible until 2025, while in some other cases, they will be visible when India turns 100, 25 years from now. Despite no major tax rate changes in either direct or indirect taxes, the budget estimates tax revenues to expand impressively through growth and improved collections. This allows the fiscal deficit to be brought down to a slightly healthier 6.4 per cent compared to the revised figure of 6.9 per cent for 2021-22.

The bottom half of India’s economic pyramid has been lashed by the pandemic through the loss of lives and livelihoods. Additionally, inflation has been eating into the real income of the poor. The micro, small and medium enterprises sector has been hit the hardest. Youth unemployment is at an alarmingly high level. The budget did not focus on the hard hit and the deprived to present a package of continued stimulus towards recovery. In all fairness to Nirmala Sitharaman, there were schemes and items scattered in her announcements that would provide a smattering of relief. For instance, the extension of the credit guarantee scheme by another year is a wise decision. The guarantee will come into play as more small-ticket loans become non-performing assets. For the sake of optics, credit should be given to the minister for presenting the PM GatiShakti scheme with four pillars and seven engines: it covers almost all of India’s requirements, from infrastructure, green finance, sustainable development, private investments, safety nets and, of course, glittering new technologies — 5G spectrum to fibre optics networks in every village — to the proposed new digital currency to be introduced by the Reserve Bank of India. The citizen has been asked to look forward to India at 100 than gaze at the coming few months of deep uncertainty.