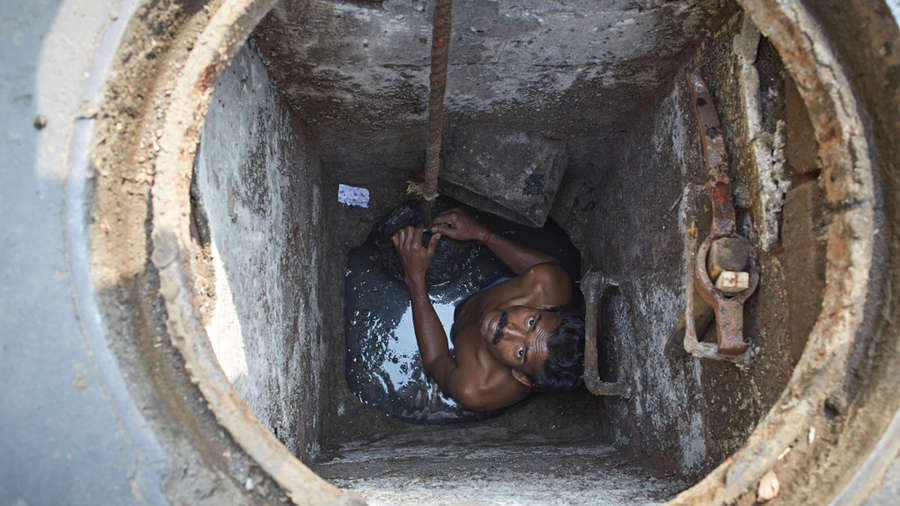 Last year, an urban affairs ministry official made a telling statement, suggesting that the primary reason why no law against manual scavenging had been effective was because “no alternative” had ever been “made available”.
Shutterstock
The Editorial Board   |   Published 26.11.20, 05:35 AM

Laws cannot be effective if they fail to help the very people whose rights and, indeed, lives they are designed to safeguard. As such, it is heartening that the Centre has decided to make the Prohibition of Employment as Manual Scavengers and their Rehabilitation Act, 2013 more stringent. Among some of the key reform measures to be implemented with the goal of eliminating manual scavenging is a move to make the mechanization of the cleaning of sewers and septic tanks mandatory. Official records — these are usually conservative estimates — show that the hazardous job done by sewage workers has led to 376 deaths over the past five years, including 110 in 2019 alone, a jump of 61 per cent from the previous year. This in spite of the slew of preventive policies that have been enacted over the past 27 years: manual scavenging was outlawed as far back as 1993. Given these worrying figures, the move towards mandatory automated cleaning must also include methods to make the machinery easily available in municipalities in cities and, equally important, in the hinterland. Incentivizing their purchase may encourage municipal authorities to induct them quickly.

Automated cleaning holds out the hope of efficiency, but the idea of mechanization must be examined more closely. Last year, an urban affairs ministry official made a telling statement, suggesting that the primary reason why no law against manual scavenging had been effective was because “no alternative” had ever been “made available”. This is a damning indictment of the nation’s troubling endorsement of the unshakeable hold of caste identities on the division of labour. Deeply entrenched and disempowering ideas concerning purity and pollution are upheld to trap underprivileged communities in dehumanizing labour practices. Shockingly, the new amendments are not free of tokenism: one of the new changes in the law proposes to replace the word, ‘manhole’, with ‘machine-hole’. A change in term is unlikely to challenge caste differentiation. There is also the possibility of unscrupulous agencies using mechanization to deny employment. Are there plans to rehabilitate safai karmacharis and equip them with skills to pursue other, hazard-free work? Moreover, mandatory automation must be accompanied by a change in the institutional approach towards urban waste management, a transformation that will be thwarted unless it embraces the wider community. Mechanization may lead to welcome cultural shifts, particularly with regard to caste, but that cannot be the only means of erasing social marginalization.