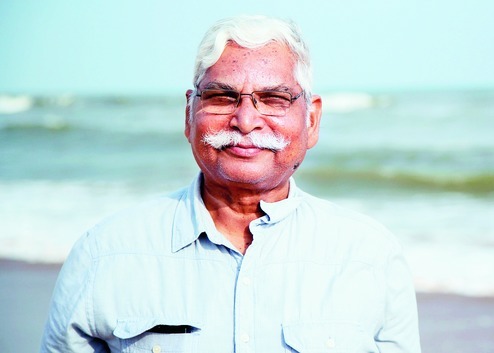 The movement to enforce Odia language in official work has crossed 500 days. Every day you organise demonstrations near Raj Bhavan pressing for the fulfilment of your demands. How do you manage to organise such protests and mobilise people for the cause on a regular basis?

I am not fighting alone for the cause. It's for the people as well as for the Odia pride. People come on their own to register their names for these protests in which they carry black flags and march from the Assembly to Madhu Babu Square near Raj Bhavan to lodge their protest against the government's apathetic attitude to the cause of Odia. Every day at 5pm, you will find people marching on the streets even if the weather conditions are adverse. Sometimes, police block our route to let the convoy of the chief minister and other VIPs pass. But we don't mind. It's a tapasya for us.

You must understand the sanctity of the movement. As a part of a greater strategy, the British had split the state into various parts. They took away the southern areas and merged it with Andhra Pradesh, some parts with Bengal, many parts with Bihar and Madhya Pradesh. In all these places, we turned into a linguistic minority. Later, the British ran the administrative work using English and Hindi. But sensing that Odisha was facing a major threat, one Dinabandhu Patnaik of Ghumsur called a meeting of the people residing along the Rushikulya river. They were of the view that if no action was taken to run the administration in our mother tongue, Odia would be destroyed and it would ultimately die an untimely death. Later, Madhu babu (barrister Madhusudan Das) and others set up Utkal Sammilani, which spearheaded the movement for the creation of a separate Odisha province on linguistic basis and the state was born on April 1, 1936. After Independence, freedom fighter Laxminarayan Mishra of Sambalpur, who had been to jail several times, moved a resolution in the Assembly on April 1, 1948, to declare Odia as the official language of the state. But he withdrew it because of pressure from several Odia stalwarts. In 1954, the state government, led by the first chief minister Nabakrushna Choudhury, got the bill passed (Odisha Official Language Act 1954) in the Assembly. There was a grace period of three years to implement the act. But, successive governments headed by Harekrushna Mahatab and Biju Patnaik did not implement it. I am currently exposing how Biju babu sabotaged the bid to implement the Odia language in official work through an amendment to the act in 1963.

But what is your demand?

The Odisha government, in response to our demand, has amended the act through an ordinance on May 21, 2016, so that rules can be framed for doing official work in Odia. But it has turned out to be a gimmick. We want a penalty provisions to punish those not following the law. If any government official failed to implement it, he should be heavily penalised. We have suggested a fine of Rs 10,000 for the first mistake, which may be compounded in the case of repeat offence. What is most interesting is that government accepted our demand and issued a notification. However, this notification has several loopholes that would make enforcement of penal provisions almost impossible.

You need a mindset to implement the Odia language. But do you think penal provisions will be a solution to the problem?

Most of the lower and middle-level government employees are Odias. Only a few IAS, IPS, IFS and IRS officers are non-Odias. They learn Odia before entering the regular service. It's the officials who deal with the common people. The common people can better express their grievances in their mother tongue. We have to force officials to accept Odia but this can be achieved only through punishment. Once strict penal provision is implemented, the situation will change overnight. But in the case of people who don't know Odia, officials can communicate with them in English. The officials must know that they are getting their salary from the tax payers' money. We have suggested that a quasi-judicial body be set up to monitor all these things.

Parida has never been in this agitation. In fact, the government used him to divert the attention of the public. One advocate Gajanan Mishra, who demanded that court work should be done in Odia language, had got two favourable orders from the high court, which said that the lower court work could be done in the Odia language. Once this was implemented, no one could stop the official work in Odia language. At this point, the Naveen Patnaik government roped in Baishnab Parida, who was earlier a communist, to divert the attention of the public on this issue. He was given a Rajya Sabha ticket. He was denied a ticket this time and he has started raising the issue that we have already raised.

But why can you not join hands with eminent linguist Debi Prasanna Pattanayak, who had worked hard for Odia language to get it the classical status?

Even though the chief minister framed wrong rules for the implementation of Odia, Pattanayak glorified the same by claiming that 84 per cent of Odias were happy with Naveen's action. This is wrong. I can tolerate everything but not someone usurping our culture and history. He was included as a member of the committee set up by the Bhasa Pratisthana, to prepare a draft to be submitted before the Centre for giving Odia a classical status. But we were shocked to find that that the same draft was submitted by former Parliamentarian Ramachandra Khuntia before the Centre. We want to know which of the two drafts is original. Was it a case of same documents being used for making both the drafts? This is unethical.

What should be our medium of education?

It should be Odia. The students can learn and express themselves best in their mother tongue.

But our boys and girls cannot compete at the global level without being educated in English...

This is a wrong conception. Those who remain in the state government have to learn Odia. Those who settle abroad should learn English.

What would you have been had you not been in journalism?

I would have worked for the spread of Communism.