Users of Mo Cycle, or My Cycle, will have to download an app and register with any one operator for a monthly subscription 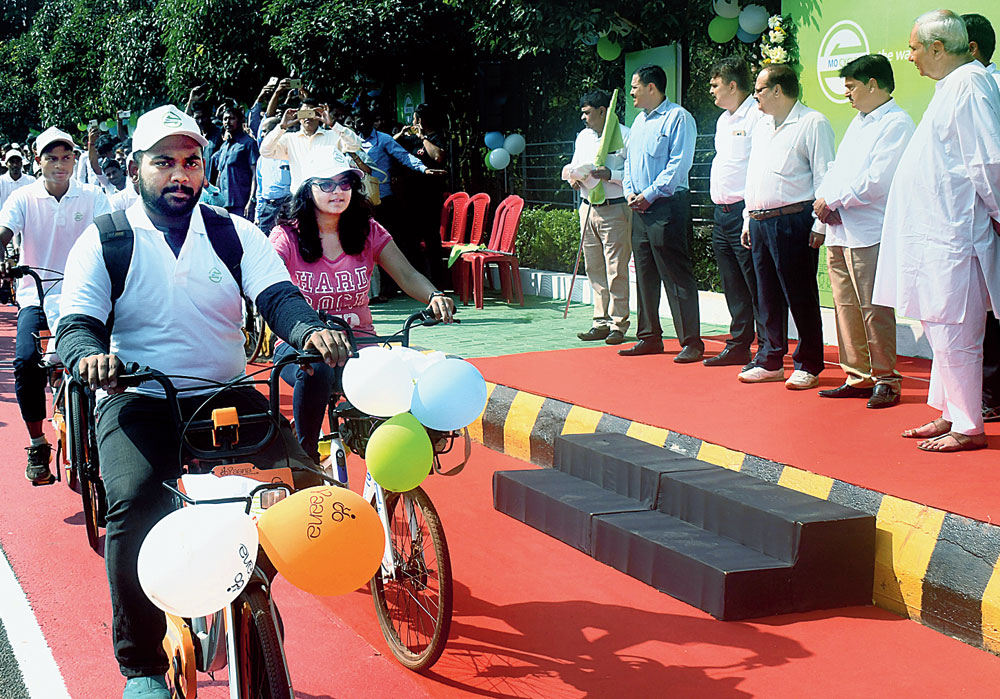 Explaining the process to access the Mo Cycle scheme, an official said that a user needed to download the app with the same name. The user then has to register with one of the three operators for a monthly subscription before they can avail of the service. The Capital Region Urban Transport (Crut) will coordinate the service.

A registered rider will have to visit the nearest Mo Cycle station and scan the QR code to unlock the bike. After reaching the destination, the rider has to end the ride on the app, manually lock and park the bicycle at any station for pick up by the subsequent rider. As part of the launch, the administration has made first 30 minutes of the ride free for the users.

The programme is equipped with nearly 2,000 modern bicycles and 400 stations for riders to access the service. The operators will coordinate to ensure redistribution and availability of Mo Cycles at locations with high demand.

The bicycles are equipped with technologies such as the GPS tracking system, cashless transactions through mobile app and smart locks. “The bicycles were designed in such a manner that both men and women can ride them. It also has special features such as adjustable seat, child-friendly element and utility basket,” said Krishan Kumar.

Sources said that unlike the rentals public bicycle sharing system, the Mo Cycles will be stored in a closely spaced network of stations and would be made available to riders for short-term and shared use.

The Mo Cycle launch comes close on the heels of the successful roll out of Mo Bus earlier this month.

“The Mo Bus service is seeing improved footfall and has been ferrying more than 32,000 passengers per day. We anticipate that the integration of Mo Cycle stations with bus shelters will further boost the Mo Bus service,” the mayor said.

Tourists here can now take a motorcycle on rent with the State Transport Authority (STA) on Monday granting licence to Yor Smartride Private Limited to rent bikes. Transport officials said that this was the first licence issued in the state under the rent-a-motorcycle scheme.

Transport commissioner Sanjeeb Panda said that a person with a valid two-wheeler licence could avail of the service. “The scheme has been introduced for convenience of tourists to the state capital for the world cup. The visitors can travel to desired destinations,” said Panda.

Tourists need to log on to www.yorindia.com and sign up with details to access the service. While Indian users need to produce Aadhaar card and driving licence, foreigners are required to produce their visa and passport to book a motorcycle. The operator, however, will keep the original passport of foreigners and return them after the motorcycle is handed over.

A user also needs to pay a refundable security deposit of Rs 300 for scooters and Rs 500 for motorcycles. The tariff for the service ranges between Rs 39 and Rs 95 per hour depending upon the type of vehicle, while the minimum booking hours has to be for three hours. The user will have to pay for the fuel.

“Pick up and return of vehicles will be done at the office of the operator at Bajrang Vihar in Patia. We have installed a smart device to detect the speed of motorcycle. In case the driver violates the speed limit, a penalty of Rs 200 will be levied,” said an employee of the company running the service.