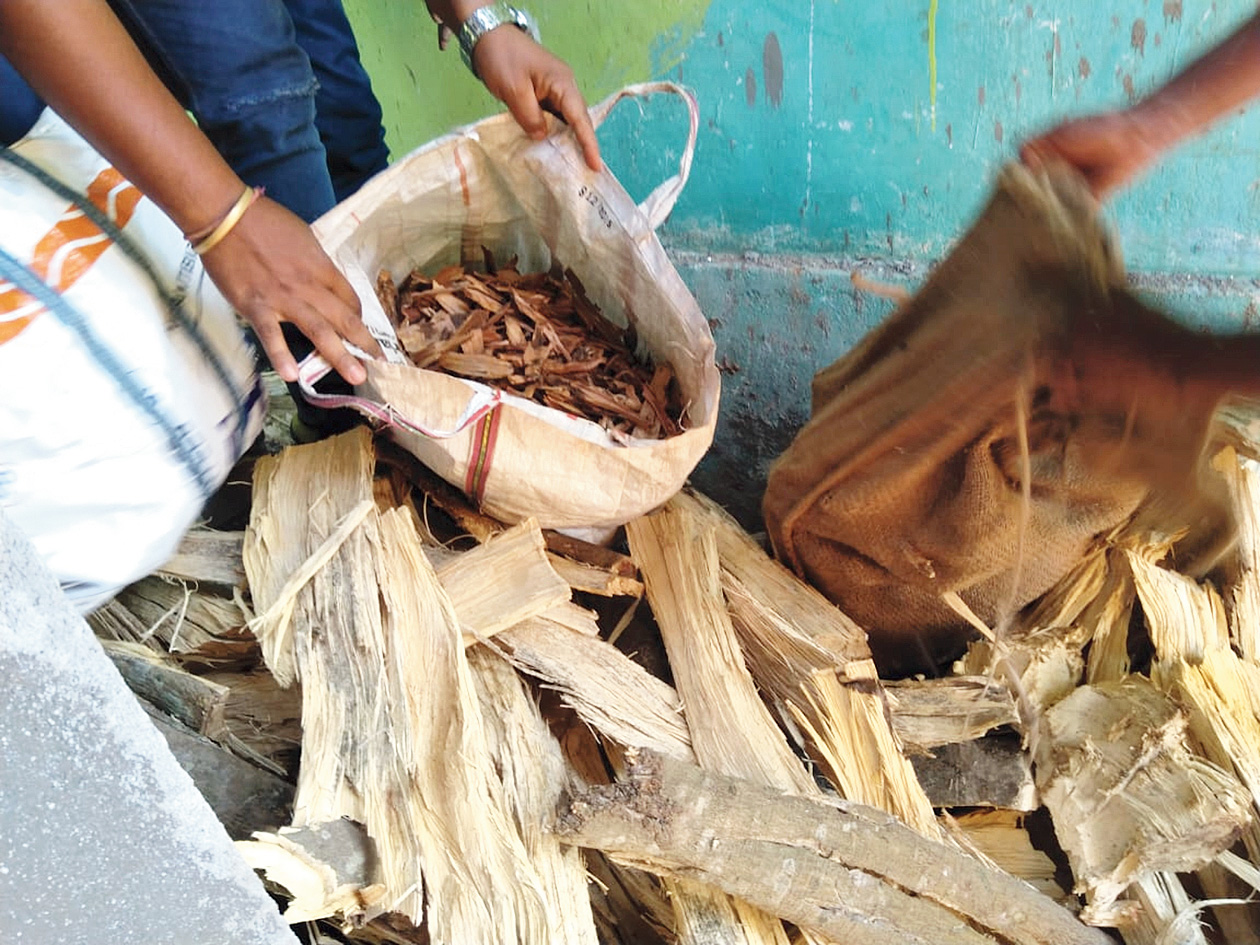 The sandalwood seized by the circle enforcement squad of the Koraput forest division.
Telegraph picture
Our Correspondent   |   Koraput   |   Published 27.10.18, 06:59 PM

The circle enforcement squad of Koraput forest division busted a major sandalwood smuggling racket on Friday and arrested two persons involved while seizing at least 388 kilograms of sandalwood from their possession.

The arrested racketeers have been identified as racket mastermind Niami Baro, 52, and Kartik Baro, 58, both residents of Padwa in Nandapur block.

Forest officials claim that this could be first sandalwood haul in the district in recent times.

“We were tipped-off about the functioning of the racket and accordingly an operation was launched. We raided the home of Nimai at Padwa and seized the sandalwood,” said Uma Mahesh, the assistant conservator of forests, Koraput, who leads the circle enforcement squad.

Speaking on the modus operandi of the gang, the officer said that Nimai, who runs a cloth store at Padwa, leads the gang that has more than two dozen members.

“The gang members target sandalwood tress at Nandapur, Padwa, Lamataput, Jeypore and Boipariguda forest and residential areas. After felling the trees, they cut it into pieces and transport it to Padwa,” said Mahesh.

“Nimai uses to pay them Rs 500 per kilogram of sandalwood while it was his responsibility to transport it to states such as Bengal and Karnataka where sandalwood price ranges between Rs 12,000 and Rs 30,000 per kilogram,” he added.

The officials said that during interrogation, Nimai has confessed that he has been running the racket for the past 10 years and he mostly used women to smuggle sandalwood outside the state.

“He used to arrange a group of eight to 10 village women and send them with the sandalwood in a train to Calcutta. Mostly, they used to smuggle the sandalwood through the Jadgalpur-Howrah Samleswari Express bribing several officials while transporting it,” said Subash Khuntia, range officer, Koraput.

Officials said that involvement of forest officials in the racket couldn’t be ruled out and that further investigation would be done to unearth the unholy nexus, if any.

“Efforts are on to arrest the other members of the gang. Anyone involved in the smuggling racket will not be spared,” said Mahesh.

The duo have been arrested under various sections of the Odisha Forest Act and will be produced before court shortly.

Police have arrested a man and recovered a stolen motorcycle from his possession in Joda township in Keonjhar district. Acting on a tip-off, raid was conducted on the house of Rustam Khan and the stolen bike was retrieved. The accused was later remanded to judicial custody, police said.