Biswajit Debbarma, a fire service personnel, succumbed to his injuries on Sunday 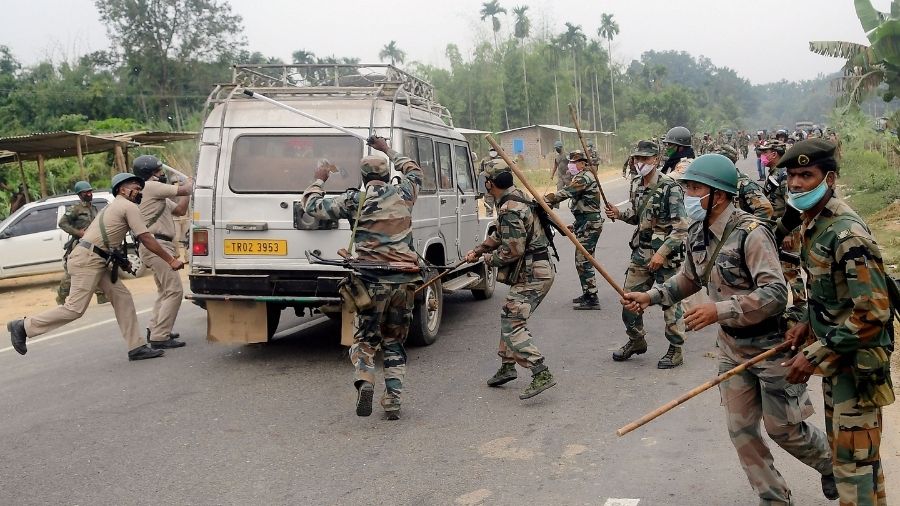 The death toll in Tripura’s Panisagar area firing incident has increased to two when a fire service personnel succumbed to his injuries, a police officer said.

The crowd was protesting against the resettlement of Bru refugees in Tripura's North district on Saturday morning.

Earlier, 43-year-old Srikanta Das, a protesting carpenter, was killed when police opened fire on the picketers on Saturday leaving at least 32 others injured.

The blockade was called by the Joint Movement Committee (JMC) which is also spearheading the ongoing strike in adjoining Kanchanpur subdivision against the government’s efforts to permanently resettle about 5,000 Brus in the area. The committee includes groups such as the Nagarik Suraksha Mancha and Mizo Convention. Protesters feel the resettlement move would change the demography and peace in the area. Sources said initially the government had planned to resettle about 1,500 Bru refugees.

The development is likely to further delay the process of rehabilitation of over 32,000 refugees who had fled to Tripura from Mizoram in 1997 following ethnic clashes. Of them, about 5,000 were to be reportedly resettled in Tripura’s North district.

According to JMC convener Sushanta Barua, police had lathicharged and then opened fire on protesters "who were demonstrating peacefully". However,  ADG Rajiv Singh alleged that the police were forced to resort to firing in self defence as the crowd went berserk and tried to snatch weapons from security personnel.

JMC chairman Zairemthiama Pachuau said the indefinite strike, which entered its seventh day on Sunday, is still on at Kanchanpur.

"The situation is calm, but tense. We are waiting to discuss the situation with a government delegation, comprising a minister and some MLAs, which is likely to be held here at 4 pm,” he said.

"State minister for Social Welfare Shantana Chakma informed us that the delegation is on way from Agartala, about 200 km from here,” Pachuau added.

The state government has announced Rs 5 lakh as compensation to the family of the deceased and ordered a magisterial probe into Saturday’s firing incident.