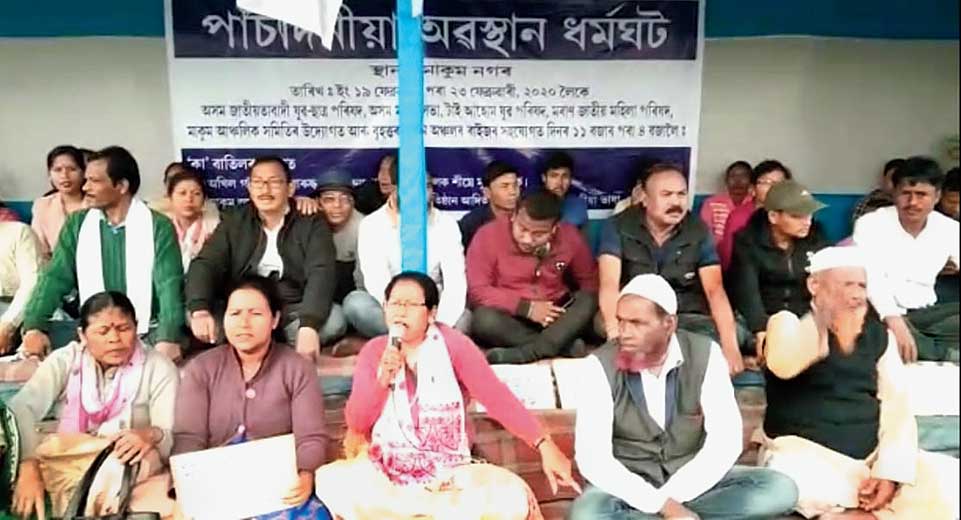 Several men and women, accompanied by their children, have been protesting against the Citizenship (Amendment) Act at Makum in Upper Assam’s Tinsukia district since Wednesday. They plan to continue the protest till the law is scrapped.

The protesters also demanded release of peasant leader Akhil Gogoi, who is in judicial custody in connection with the violence during anti-CAA protests.

“We have come to join the protest from Tingrai village along with our children after completing our household work. We have the right to protest and the state and central governments can’t deprive us of our rights. There is no question of five or 10 days. We will continue our protest till CAA is repealed,” said Rizwana Khatun, a protester.

Some protesters also hinted that the sit-in could become a replica of the Shaheen Bagh protest in Delhi, where women have been demonstrating against the citizenship law for more than two months.

“The people of Assam have been protesting against CAA since December last year. Union home minister Amit Shah was in neighbouring Arunachal Pradesh today but he said nothing about CAA. He did not respond to the pain the people of Assam are facing. We are living in fear, the fear of losing our language, culture, tradition, customs and conventions,” said an inconsolable Naima Begum.

Shah visited Itanagar on Thursday and launched several projects at Indira Gandhi Park. He assured the people that Article 371, which provides special provisions to most of the northeastern states, will remain intact and it had no connection to abrogation of Article 370. Shah, however, did not mention CAA.

The protesters said many of their names were excluded from the final National Register of Citizens (NRC) even after running to the NRC office repeatedly and submitting documents to officials.

According to sources, Makum, which is adjacent to Tinsukia town, has witnessed the highest numbers of rallies, protests and procession since the anti-CAA movement erupted across the state after the Lok Sabha passed the citizenship bill on December 9 last year.

Makum connects the eastern districts of Arunachal Pradesh and Assam’s easternmost corner with the rest of the country. National highways 37 and 52 and new bypass roads as well as railway tracks pass through it.

Hence, protesters often choose this town for any protest, which frequently leads to road and rail blockade, and becomes a headache for the district administration to maintain law and order. The roads here connect almost all villages and towns of Tinsukia district as well.

Anti-CAA protests were also organised in Tinsukia town, Kakopathar and Margherita in the district.