Successive Congress governments did precious little to implement the Assam Accord, he said 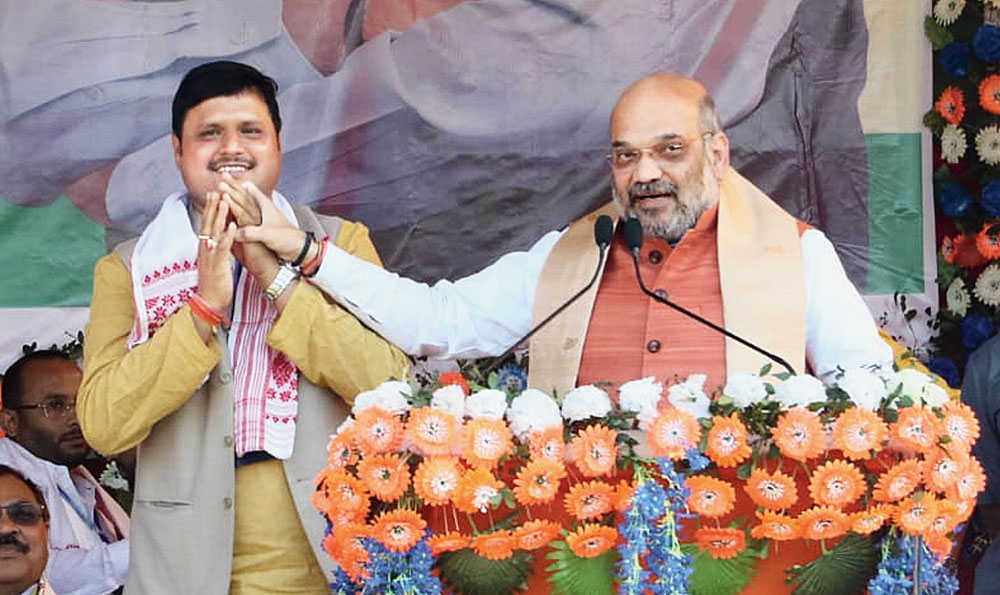 BJP national president Amit Shah on Thursday said successive Congress governments did precious little to implement the Assam Accord, which was signed by “the father of Rahul baba” in 1985.

“It was the Narendra Modi government that took steps to implement the Accord to protect the identity, language and culture of the people of Assam,” he said while campaigning for BJP’s ally AGP at a poll rally in Kaliabor in central Assam’s Nagaon district.

“We have set up a committee to implement Clause 6 of the Assam Accord. The committee will submit its report in a year,” he added.

“The Modi government has made NRC (National Register of Citizens) update possible which will protect Assam from cross-border infiltration,” Shah claimed.

He also took a swipe at former Prime Minister Manmohan Singh, saying that despite representing Assam in the Rajya Sabha for four consecutive terms, “he did not do anything for the state”.

Claiming that only Modi can secure the nation’s borders, he alleged, “In 10 years of Sonia Gandhi and Manmohan Singh government, our soldiers’ heads were chopped off (by the enemy) but there was no reply from India side.”

Referring to the 2016 surgical strike in Pakistan-occupied Kashmir (PoK) after a terrorist attack on an Indian Army base at Uri that left 19 soldiers dead and the 2019 air strike at Balakot in Pakistan after the Pulwama attack in Kashmir that left 40 CRPF jawans dead, he said

under Modi, India became the third country in the world after the US and Israel to avenge the killing of its soldiers.

“Should we not avenge our soldiers’ blood?” he asked, criticising the Congress for asking for proof of the casualty in the air strike at Balakot.

“It was the BJP government under the leadership of (chief minister) Sarbananda Sonowal and (cabinet minister) Himanta Biswa Sarma that dared to evict encroachers from Kaziranga. After our government came to power, rhino poaching has declined as poachers are now behind bars,” he said.

Shah claimed that the NDA would win all the 14 seats in Assam.

From Kaliabor, he went to Teok in Jorhat district to address another rally.

Speaking at Teok, he claimed a secret understanding between the Congress and the AIUDF.

“During daytime, (Tarun) Gogoi and (Badruddin) Ajmal criticise each other but at night ILU-ILU starts between them. The Congress has joined hands with the AIUDF to flood the state will illegal infiltrators,” Shah alleged.

“ILU” was used as an acronym for ‘I love you’ in a song of the Bollywood blockbuster Saudagar in the early 1990s.

He said “Gogoi (former three-time chief minister of Assam) fell at the feet of Ajmal (AIUDF chief) only to ensure the victory of his son Gaurav Gogoi in the Lok Sabha polls”.

Gaurav is the sitting MP from Kaliabor seat and is seeking a re-election for the second term from the same constituency.

The AIUDF has announced that it will contest only three seats out of the total 14 in Assam, Dhubri, Barpeta and Karimganj, which is expected to help the Congress.