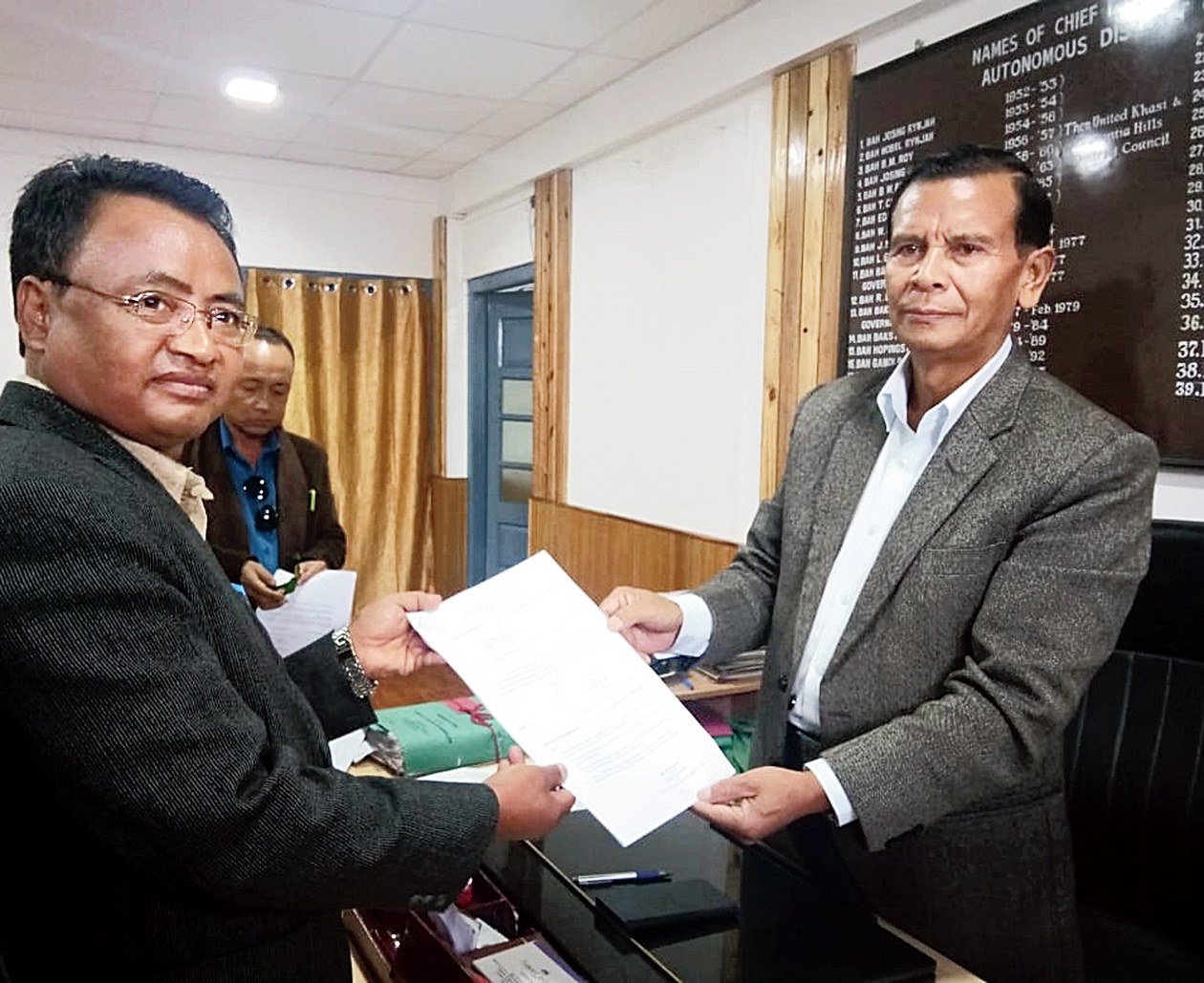 KHADC chief H.S. Shylla receives a copy of the report on the lineage act from consultative committee chairman Mansturdy Nongrem in Shillong on Tuesday.
File picture
Our Correspondent   |     |   Published 09.10.18, 06:48 PM

The Khasi Hills Autonomous District Council proposes to grant a period of six months to Khasis who have drawn their lineage from their father to revert to the customary matrilineal system, failing which they would “cease to be a Khasi”.

One of the principles which Khasi society stands by is Tip Kur, Tip Kha (to abide by one’s maternal and paternal kinship).

Speaking to reporters on Tuesday, council chief H.S. Shylla said drawing lineage from the father was “a greater danger than mixed marriages”.

“The act had given five years to those who had strayed away from the matrilineal system. The period ended in 2010. But we are thinking of granting another timeframe of six months so that people can come forward and rectify the mistake. Those who do not follow the matrilineal system will cease to be a Khasi,” he said.

He also said drawing lineage from the father could jeopardise the existence of the 25 Khasi states (Himas) since the chief’s mantle (Syiemship) is not handed from father to son.

“If the Himas collapse, it would pave the way for the panchayati raj system,” he added.

Shylla said the act would be amended to rein in mixed marriages.

Earlier, there was a proposed amendment that a Khasi woman who marries a non-Khasi man would be stripped of her Khasi status. Even her offspring would meet the same fate. However, this amendment did not receive the governor’s assent and was returned to the council.

Hinting that the earlier proposal would find room in the upcoming amendment, he said the council’s executive committee would finalise the amendment before a special session of the council is convened to pass it.

He also said the council would bring a new legislation, Khasi clan bill, to deal with clans.

To a query on the third gender, Shylla said the proposed amendment would not recognise them, as the act strictly deals with customs, lineage and the matrilineal system.

He also received the consultative committee’s report on the act.

The committee has recommended that non-tribal regulations should be amended, the executive committee should be stringent in granting trading and labour licences, the traditional Durbar system regulated and strengthened and immediate steps taken to check the entry of non-indigenous people.

Shylla said the council would empower chiefs, headmen and clans to ensure that the act and the proposed amendment were not violated or misused.