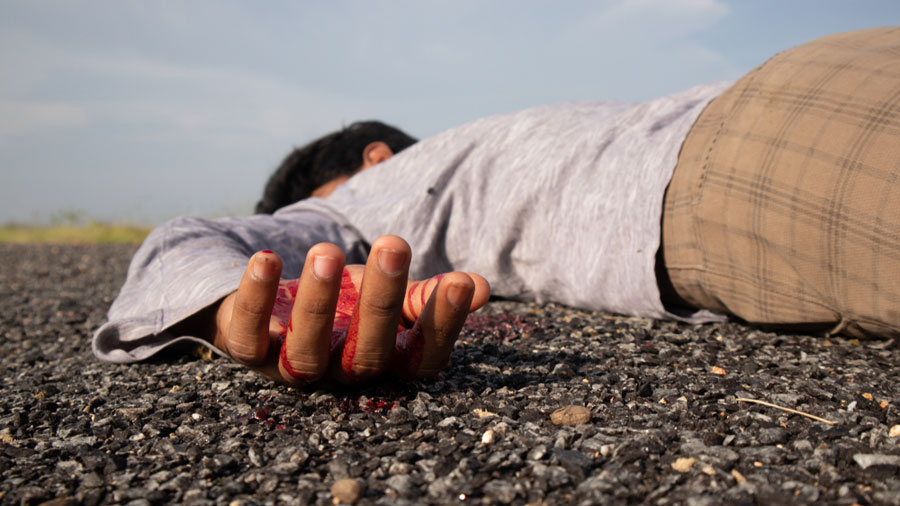 Niraj Kumar Das, the prime suspect in the lynching of an All Assam Students’ Union leader, was killed in a road accident in Upper Assam’s Jorhat district while trying to flee, police said on Wednesday.

Das was arrested on Tuesday in connection with the lynching of AASU leader Animesh Bhuyan on Monday. Das died after he jumped off a police jeep and was hit by another police vehicle following the jeep, Jorhat superintendent of police Ankur Jain told The Telegraph.

The incident took place at 2am under the Cinnamara police outpost, which is around 11km from the Jorhat police station and about 300km northeast of Guwahati.

“He was leading the police team to recover a drug consignment under the Mariani police station but suddenly jumped off the moving jeep to escape from custody. But an escort vehicle following the jeep, which too rammed into a wall, hit him. Three policemen in the escort vehicle were also severely injured,” Jain said.

Mariani is around 20km from Jorhat.

Initially, there were reports about Das dying in a police encounter.

All the four, including Das, were rushed to the Jorhat Medical College and Hospital where Das, allegedly a “habitual offender" having scores of criminal cases lodged against him, was declared brought dead.

There were four policemen in the jeep and three cops in the escort vehicle, the police said.

Security has been tightened in the Borigaon area under the Jorhat police station from where Das hailed to curb any untoward incident.

Das alias Kola Raja, 35, was the 28th accused to have died in the police custody since the BJP-led state government took charge for the second straight term in May this year

Altogether, 13 people, including Das, were arrested in Monday’s lynching case which saw a protest by the AASU unit in Jorhat and widespread criticism of the shocking development that took place in the middle of the town, reviving the demand for a separate law to check rising mob violence and lynching in the state.

Bhuyan and two of his companions were assaulted by a mob after an "inebriated" Mohan Das, 71, the father of Das, fell off his scooter at Nirmal Chariali on Monday afternoon and then blamed Bhuyan and his companions for his fall triggering the assault.

The trio had gone to help Mohan but the latter alleged his scooter was hit by the trio’s vehicle. The police have claimed their vehicle did not hit Das’ scooter.

There were protests inside and outside the court seeking swift and exemplary punishment for those involved in the killing. Five of the accused were sent to 14 days’ custody while seven to five days’ police remand.  Das was not produced in the court on Tuesday.

Few youths in Jorhat town and Dergaon town, from where Bhuyan hailed, celebrated Das’s death in the morning by bursting crackers, proclaiming justice has been delivered, sources said.

Chief minister Himanta Biswa Sarma had on Tuesday directed the police to file a charge sheet against the accused booked under various sections of the IPC, including murder and common objective, within a month.