One dead and 32 injured in police firing in Tripura

The development is likely to further delay the process of rehabilitation of over 32,000 refugees who had fled from Mizoram in 1997 following ethnic clashes 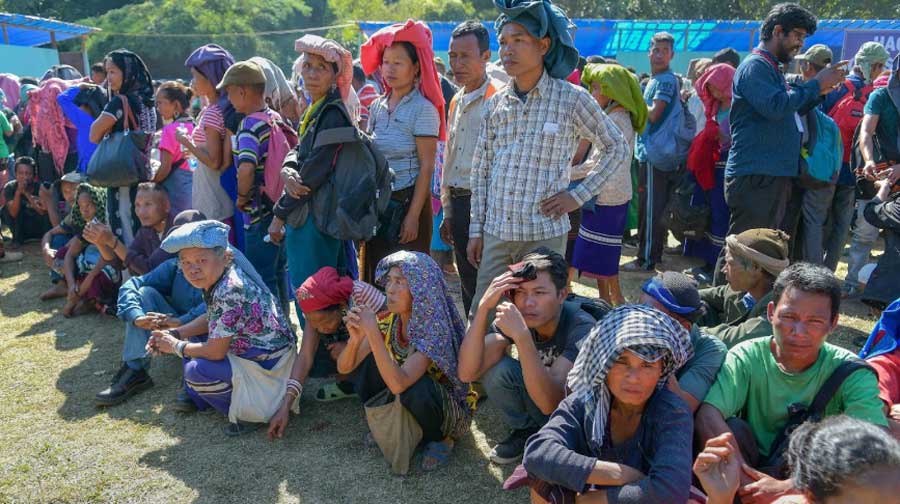 The development is likely to further delay the process of rehabilitation of over 32,000 refugees who had fled to Tripura from Mizoram in 1997 following ethnic clashes. Of them, about 5,000 were to be reportedly resettled in Tripura’s North district.
PTI
Umanand Jaiswal   |   Guwahati   |   Published 22.11.20, 12:56 AM

One person died and 32 people were injured when police fired to contain a crowd protesting against the resettlement of Bru refugees in Tripura's North district on Saturday morning.

The development is likely to further delay the process of rehabilitation of over 32,000 refugees who had fled to Tripura from Mizoram in 1997 following ethnic clashes. Of them, about 5,000 were to be reportedly resettled in Tripura’s North district.

A statement released by the police on Saturday night said it had to fire on the protesters participating in the National Highway 8 blockade at Chamtila in Panisagar subdivision. The highway connects Tripura with Assam.

“At around 10.30am, the protesters numbering 3,000 became agitated and broke the barricades set up by the police and also damaged police and fire service vehicles and set them on fire. Police showed utmost restraint and in the beginning used lathicharge and tear gas to disperse the agitating crowd. But they became more aggressive and violent and finding no other way and to protect the life and property and for self-defence, police resorted to firing on the orders of authority,” the statement said.

The blockade was called by the Joint Movement Committee (JMC) which is also spearheading the ongoing strike in adjoining Kanchanpur subdivision against the government’s efforts to permanently resettle about 5,000 Brus in the area. The committee includes groups such as the Nagarik Suraksha Mancha and Mizo Convention. Protesters feel the resettlement move would change the demography and peace in the area. Sources said initially the government had planned to resettle about 1,500 Bru refugees.

JMC convener Sushanta Barua said they were protesting peacefully but the police and Tripura State Rifles jawans lathicharged them and then started firing.

The crowd control measures left 32 people injured, of whom 18 are civilians, six police personnel and eight from the fire service. Section 144 of CrPC has been imposed to prevent unlawful assembly of people in the area.

The injured were shifted to Panisagar subdivisional hospital and subsequently eight were referred to the district hospital. Panisagar is around 17km from state capital Agartala.

The government has announced a magisterial inquiry and an ex gratia of Rs 5 lakh to the family of the deceased, an official said. Additional forces have been deployed in both Panisagar and Kanchanpur to maintain law and order, he added.

The situation is under control now, police said.

Over 32,000 Brus fled from neighbouring Mizoram’s Mamit, Kolasib and Lunglei districts in 1997 following ethnic clashes and have since been residing in temporary camps in Panisagar and Kanchanpur subdivisions in Tripura’s North district.

As part of a quadripartite agreement signed in January between the two states, the Bru refugees and the central government, the Tripura government has shortlisted 12 sites in six out of eight districts to rehabilitate the Bru refugees. The Centre had also declared a Rs 600 crore package for the rehabilitation. Since 2009, over 5,000 Bru refugees have returned to Mizoram in nine phases.

Tripura deputy chief minister Jishnu Devvarma had said on Thursday that the government was looking into the grievances of the protesters and that fomenting trouble would not lead to any solution. He said Brus were also citizens of the country.