NRC update to root out all infiltrators: Modi 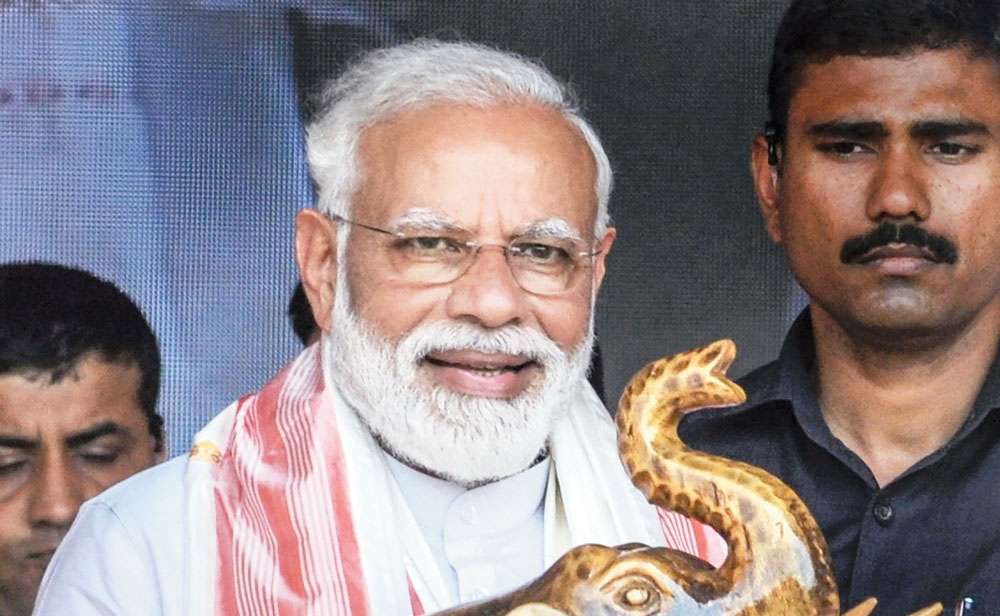 Prime Minister Narendra Modi on Thursday said the BJP was committed to implementing the citizenship (amendment) bill but it will be done only after consultations with all sections of the people of the Northeast.

Modi addressed two rallies in Assam where he dwelled on the bill and infiltration.

Addressing a rally at Ramnagar in Barak Valley’s Cachar district, he said the BJP was committed to implementing the bill and will push for it in Parliament again if it returns to power.

“The views of different organisations/stakeholders/sections will be taken into account and necessary amendments carried out so that the bill does not impact the Assamese people,” he said.

On the first phase of parliamentary polls in the country, Modi said, “According to information I have received so far, there is a huge wave for us in the polling being held today.”

In his 27-minute speech, Modi also spoke about the government’s vision for progress and development and promised that every person will have their own house and farmers’ income will be doubled by 2022. “Electricity will reach every house,” he said adding, “chowkidar is there for the masses”.

The Prime Minister was dressed in a white kurta and pyjama with a saffron cloth on his neck. The weather was bright and sunny. He arrived at the venue around 3.55pm, amid cheers of “Modi, Modi” from a packed ground.

Chief minister Sarbananda Sonowal said the government was committed to developing both the Barak and Brahmaputra Valleys and make Assam one of the best states. He said the Congress had deprived Barak Valley for several years. The valley witnessed a “new dawn” after the BJP came to power, he said.

Earlier, addressing a rally at Kendukona in Kamrup district, under Mangaldoi Lok Sabha constituency, Modi said the Congress had encouraged infiltration in Assam for vote bank.

“The issue of border demarcation with Bangladesh was kept on hold and infiltration continued. The Congress took advantage of this and people continue to suffer. This is what people got from the Congress,” the Prime Minister said.

He said every time he came to Assam, it was like a homecoming, owing to the love he received from the people.

Modi said his government had taken all steps to protect the interests of Assam.

“To protect Assam’s interests and integrity, we have taken concrete steps. We signed a land boundary agreement with Bangladesh following which fencing the border became easy. We initiated the process to identity the infiltrators; soon the work will be completed. We are ensuring that no genuine Indian citizen is left out and no infiltrator’s name is present in the National Register of Citizens (NRC),” he said.

Modi said concrete steps have been taken to implement Clause 6 of the Assam Accord. “We are working to give Scheduled Tribe status to six communities. A bill was tabled in the Rajya Sabha by our government. However, we will ensure that rights and privileges of existing tribes will be protected. This is my promise.”