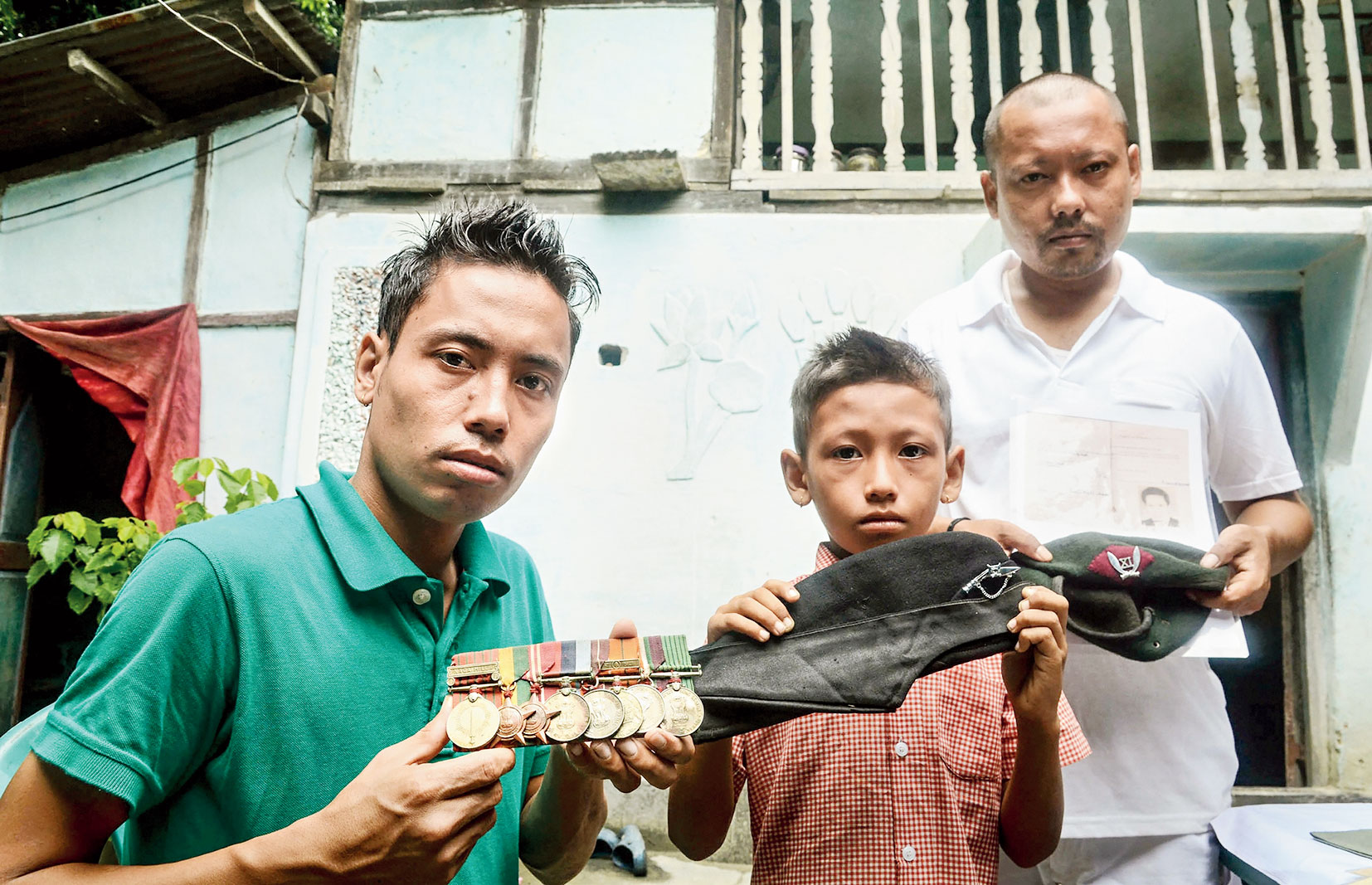 Karge Bahadur Limbu and Bharat Limbu, sons of late Bhagi Bahadur, who fought in the 1962 Sino-Indian War from the Gorkha Regiment, show their father’s medals and military beret at Ambari village in Baska. The Limbus were excluded from the NRC.
(PTI)
Satananda Bhattacharjee   |   Hailakandi   |   Published 16.09.19, 07:23 PM

An advocate and social worker of Silchar in Assam’s Barak Valley, Tuhina Sarma, has taken up the cause of over 200 sex workers of Silchar who could not apply for inclusion in the National Register of Citizens (NRC) due to a dearth of documents as their family members didn’t permit them to use their legacy data.

Their names have not been included in the NRC published on August 31.

A legal professional said if they don’t have any documents they may be sent to a detention camp.

The purpose of the NRC update is to identify Indian citizens from among all residents of Assam. It aims to identify illegal migrants who entered India after the midnight of March 24, 1971 and determine the citizenship of the applicants who have applied for inclusion.

In the final document, of the total 3,30,27,661 applicants, over 19 lakh didn’t find their names in the final list and they will have to appeal to the foreigners’ tribunal within 120 days.

Most of the sex workers are allegedly from Nepal, Bhutan and Bangladesh and apparently came to India as victims of human trafficking.

As most of them lost ties with their families after coming to India, they also don’t have any legacy data and papers to prove their citizenship for inclusion in the NRC.

Sarma said around 200 workers don’t have documents at all and it was expected that their names will not be included in the NRC due to dearth of documents. They had also tried to include their names in the voter list but to no avail.

Sarma said she was going to raise the question before the government regarding the fate of these women. “They should not be allowed to die like dogs and cats,” she said.

The advocate said due to ignorance and non-availability of documents, the women didn’t apply for inclusion in the NRC and now it was impossible to apply to the foreigners tribunals. They are thus headed towards an uncertain future.

Sarma said she was astonished to see that the family members of these women did not allow them to use their legacy data.

In places like Calcutta, sex workers had voter and Aadhaar cards, Sarma said, adding: “Due to their extreme ignorance, the names of these workers also could not be included in the voter list.”

The exact number of sex workers in Silchar is still unknown and some speculate that the number may be around 1,000.

They are living in very pathetic conditions. Some workers have children who are facing malnutrition and unhygienic conditions.

The sex workers are clustered around Panpatty, Nagapatty and Radhamadhav Road.

In 2012, the district administration of Cachar took the initiative to evict them after the intervention of the Civil Society Women Organisation (CSWO), a Shillong-based NGO, following the rescue of three women from Meghalaya from a brothel on Radhamadhav Road.

However, this initiative did not bear fruit.

A notice was issued by the Silchar Municipal Authority in 1963 prohibiting prostitution in the public places of Silchar according to Section 256 (1) of Assam Municipal Act, 1956 but even this was not adhered to.

The officials of both civil and police administration are tightlipped on the issue.

The scare of exclusion from the NRC has travelled from Assam to parts of Alipurduar in north Bengal as people have started visiting different government or semi-government offices, schools and banks to arm themselves with documents that can help them prove that they are legitimate Indian citizens and their families have been staying in India from before March 26,1971.

Those frantically in search of documents comprise traders, retired government employees, youths and even homemakers. Many are those with family members and relatives in Assam whose names are not in the NRC.