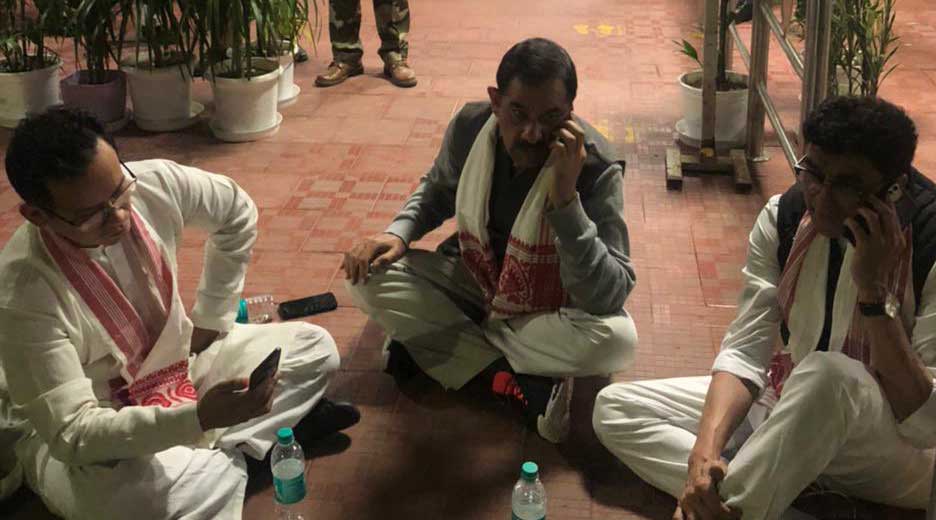 Congress leaders at the Jorhat airport after being stopped from visiting Nagaland
Twitter: @GauravGogoiAsm
Umanand Jaiswal   |   Guwahati   |   Published 09.12.21, 01:04 AM

The New York-headquartered Human Rights Watch has sought the repeal of the Armed Forces Special Powers Act (AFSPA) in the wake of the civilian killings in Nagaland because the law “provides soldiers with effective immunity from prosecution”.

The international NGO, which conducts research and advocacy on human rights and abuse in around 100 countries, on Wednesday said the death of 14 civilians over the weekend highlighted the need for the Indian government to immediately repeal the “abusive” law.

The civilians were killed in a botched counter-insurgency operation and subsequent violence related to it in Nagaland on December 4-5, reviving calls to repeal AFSPA. Enacted in 1958, the law gives power to armed forces operating in disturbed areas to search, arrest and shoot.

“Pledges by India’s home minister and the army to investigate the army’s horrific killing of 14 people will come to nothing unless those responsible are prosecuted. So long as the Armed Forces Special Powers Act protects soldiers from accountability, such atrocities will continue,” said Meenakshi Ganguly, South Asia director at Human Rights Watch.

Union home minister Amit Shah had expressed regret over the incident and said a special investigation team would probe it. “However, he did not clarify in Parliament whether the central government will give permission to prosecute those found responsible,” the rights watchdog release said.

The Nagaland cabinet had on Tuesday decided to formally move the Centre to repeal the law. Meghalaya chief minister Conrad Sangma and all leading organisations of Nagaland such as the Naga Hoho and the Konyak Union have also sought its withdrawal.

Besides Nagaland, the law is in place in Manipur, Assam and parts of Arunachal Pradesh in the Northeast, and in Jammu and Kashmir.

“While Indian law permits prosecuting members of the armed forces accused of crimes under either the military or civilian justice systems, the AFSPA requires the central government’s prior approval for civilian prosecutions of military personnel,” the Human Rights Watch release said.

“Under the Army Act, the military may transfer a soldier from civilian to military custody for offences that can be tried by a court martial.… Available information shows scant evidence that the military is fully and effectively prosecuting soldiers and officers for rights abuses.… The central government routinely denies permission for civilian prosecution of military personnel,” it added.

Following the December 4 killings in Nagaland, Justice (retd) Madan B. Lokur, part of the Supreme Court bench that had directed an investigation into alleged extra-judicial killings by security forces in Manipur, said that although AFSPA gave broad powers to the armed forces, it “does not mean that they can go around just killing anybody,” Human Rights Watch pointed out.

It said several government-appointed commissions in India had also recommended the law’s repeal but in the face of “resistance” from the army, the government had “failed” to implement the proposals.

Several United Nations human rights bodies have also called for the scrapping of the law. A 2019 report on Jammu and Kashmir by the Office of the United Nations High Commissioner for Human Rights had “noted” that AFSPA “remains a key obstacle to accountability”.

“AFSPA has long shielded the armed forces from responsibility for grave human rights abuses and denied justice to the families harmed. The government should ensure an independent civilian investigation into the Nagaland killings and urgently repeal AFSPA to save many more lives,” Ganguly, the South Asia director at Human Rights Watch, said.

Hitting out at the “notorious” AFSPA, the National Socialist Council of Nagalim (I-M), which is part of the ongoing peace process to end the decades-old Naga insurgency, said on Wednesday that the Nagas have had the “bitter taste of this act” on numerous occasions and it had spilled enough blood.

“Blood and political talks cannot go together.… No political talks will be meaningful under the shadow of AFSPA. Let human dignity take control and be made an integral part of the Naga political peace process,” the NSCN (I-M) said.

Refuting Shah’s claim that security personnel fired at the pick-up truck killing six of its occupants when the vehicle tried to flee instead of stopping, the largest insurgent group said there was “no signal” by the forces to stop the vehicle.

The group quoted a survivor, Sheiwang, undergoing treatment Dibrugarh Medical College and Hospital in Assam who said: “They shot right at us, no signal to stop, we did not flee.”

Cong team stopped
A Congress delegation was on Wednesday barred by the Jorhat district administration in Assam from going to Nagaland to meet the families of the victims. They were detained at Jorhat airport, compelling delegation members Gaurav Gogoi, Jitendra Singh, Ajoy Kumar and Rana Goswami to stage a dharna.

An order issued by the Jorhat deputy commissioner said the Nagaland government had restricted the movement of civilians and others from Assam owing to the prevailing law-and-order situation in Mon and other bordering districts.

Gogoi tweeted: “We have been sitting on a dharna at Jorhat airport for the last three hours. Our only aim is to visit our brothers and sisters in Nagaland and tell them the Congress party stands with them in this hour of grief. The Assam police under instructions has detained us at Jorhat airport.” A Nagaland official said the situation was under control in Mon.

A Nagaland official said the situation was under control in Mon.

We have been sitting on a dharna at Jorhat airport for last three hours. Our only aim is to visit our brothers and sisters in Nagaland and tell them Congress party stands with them at this hour of grief. The Assam police under instructions has detained us at Jorhat airport. pic.twitter.com/vT2ezLEj7I