Congress to table resolution on repeal of CAA 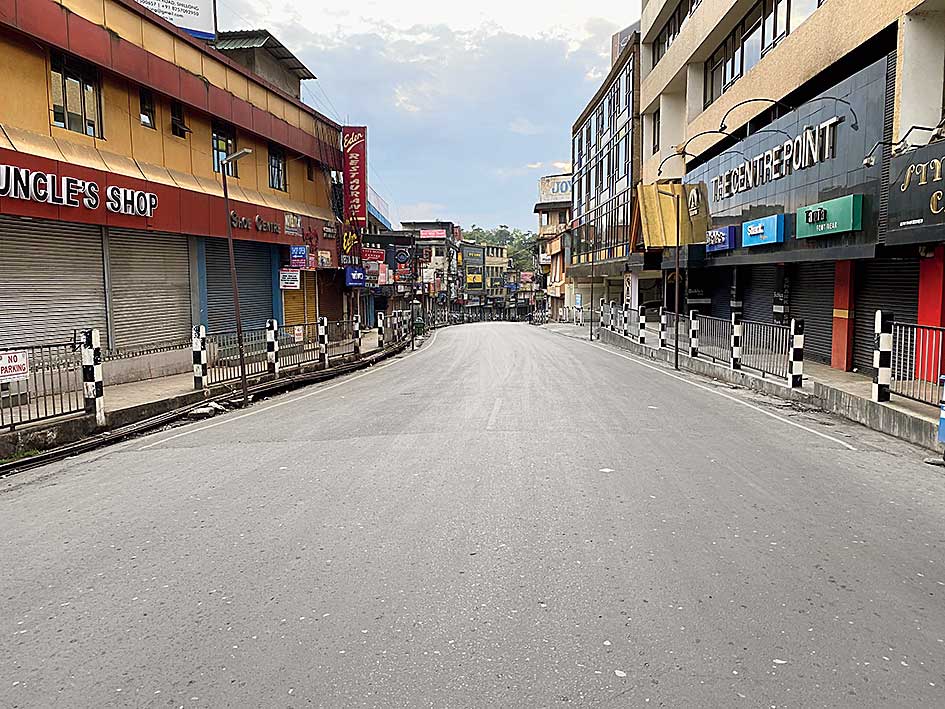 Rapid Action Force personnel began patrolling the streets here on Wednesday though no untoward incident has been reported in Meghalaya since Tuesday.

Assistant inspector-general G.K. Ïangrai said no untoward incident was reported from anywhere in Meghalaya till Wednesday night and that 110 RAF personnel had arrived in the state capital on Wednesday. These personnel were seen patrolling the Khyndailad and Motphran areas during the day.

On Wednesday, curfew was relaxed from noon till 4pm in the entire Khyndailad and neighbouring areas but there was no relaxation in Ïewduh, Ïew Mawlong, Motphran and Paltan Bazar.

Curfew was clamped on Friday following a clash at Ichamati in Sohra sub-division after an anti-Citizenship Amendment Act (CAA) meeting organised by the Khasi Students’ Union and the Federation of Khasi-Jaiñtia & Garo People. A KSU member died during the clash while on Saturday a vendor died after he was stabbed at Ïewduh.

Leader of the Opposition Mukul M. Sangma told reporters here that the Opposition would table a resolution during the budget session, slated to begin on March 13, seeking to repeal the CAA.

Mukul was replying to a query on the government’s reluctance to adopt a resolution seeking repeal of CAA, which lies at the heart of the Ichamati incident.

Mukul demanded an “appropriate” inquiry into the Ichamati clash and criticised the state government for its alleged “chalta hai” (casual) attitude in handling the situation. He apprehended that the perpetrators could go scot-free and demanded that all of them be booked “without protecting anyone”. He said the magisterial inquiry instituted by the government “could be an eye-wash” and demanded an “appropriate inquiry”.

He also criticised the government for its handling of the current situation and the administration for its manner of enforcing the curfew. He wondered who was calling the shots. “This government is totally cut off from the ground reality. It is looking at the affairs of governance with a chalta hai attitude despite the writing on the wall. Who is deciding on imposition and relaxation of curfew? Is it the chief minister’s office or somebody else?” he asked.

“On Tuesday, the curfew in and around Khyndailad was relaxed from noon till 3pm. But when did the people know about this? They did not even know that the curfew was relaxed. Is this the way you govern the state?” he asked. He also said that the curfew was not properly enforced in the city. “What can be a bigger joke than this? If it isn’t necessary, why impose it?”

He alleged that for the past two years, the government has infringed upon people’s rights by resorting to shutdown of communication “There is a sudden disruption of communication, besides confusion in how to handle law and order. This shows a bankruptcy of knowledge on how to handle the situation. Is it necessary to shut down social media? Prior to 2018, when did you see a shutdown of the Internet?” the former chief minister asked.

He said it was the collective responsibility of everyone to restore peace.