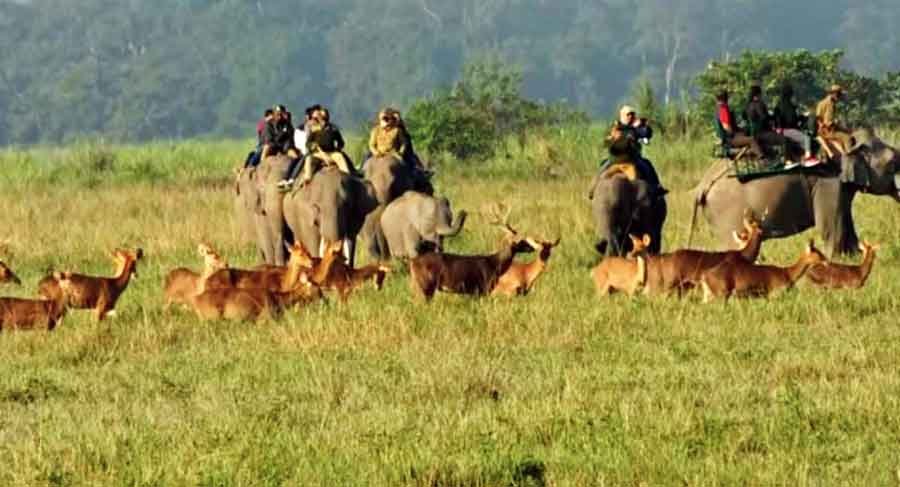 Visitors from Assam have helped the Kaziranga National Park, a World Heritage Site popular for its one-horned rhinos, to almost make up for the shortfall in tourists from other states and abroad amid the Covid-19 pandemic.

According to the figures released by the KNP authorities, over 1,20,960 people have visited the park since October 21 last year despite the popular tourist destination remaining shut for several months because of coronavirus restrictions and flood. During the last fiscal, there were 1,74,013 visitors, including 11,595 foreign tourists. The number of foreign tourists has fallen to a dismal 188 in the current fiscal.

Kaziranga National Park and Tiger Reserve director P. Sivakumar told The Telegraph on Friday that visitors from Assam are driving the ongoing tourist season despite the Covid gloom.

Tourists out on jeep safari in the park.
Telegraph picture

“We are happy with the overwhelming response. People from Assam are visiting the park in large numbers since they are avoiding trips to other states and abroad because of Covid-19. Around 95 per cent of the visitors till now are from the state. If we go by the number of visitors, we could have crossed last year’s figures but for Covid and flood. We will come close to last year’s footfall figures, if not in revenue generation,” Sivakumar said.

Kaziranga has so far generated Rs 2.22 crore in revenue compared to Rs 4.82 crore in the last fiscal.

Assam chief minister Sarbananda Sonowal had thrown open the 430sqkm park to visitors from October 21 with strict Covid-19 protocols in place. The park usually closes in May because of flood but it had to shut in March because of the coronavirus-induced lockdown.

Apart from the usual jeep and elephant safaris, the main draws this year have been dolphin sightings at Bhomoraguri, birding in Agoratoli and trekking at Baneswar and Chirang Pahar.

“Apart from these new introductions to attract visitors, fuelling the response is also our social media presence. We have got 15,000 followers on Twitter and over 27,000 on Facebook. Our close coordination with tour operators have also helped attract visitors,” Sivakumar, who took charge in March 2019, said.

A rhino with her calf in Kaziranga
Telegraph picture

The park had seen a record number of visitors (1,88,376) and revenue generation (Rs 5.60 crore) in 2017 but it has been consistently clocking over 1.7 lakh visitors and revenue close to Rs 5 crore since then.

Sivakumar said revenue is mainly generated by foreign tourists and those from other states. On an average, a foreign tourist spends at least Rs 2,500 a day. Entry fees for domestic tourists is Rs 100 per person against Rs 650 for a foreigner.

“Food and safari business is doing well but we need people to stay back to see a rise in revenue. A foreign tourist spends as much as 12 locals in a day. For most locals it is a daylong trip and we get only Rs 100 in entry fees. But we are happy they are turning up in healthy numbers and helping us cope with the Covid-19 blues,” Sivakumar said.

The park was set up in 1906 and declared a World Heritage Site in 1985 and a tiger reserve in 2007. Today, the park has 121 tigers, 1,089 elephants and an estimated over 2,410 rhinos. It attracts more visitors annually than the other five national parks in Assam.

Raimona in Kokrajhar district will be the sixth national park of the state once it is formally notified.