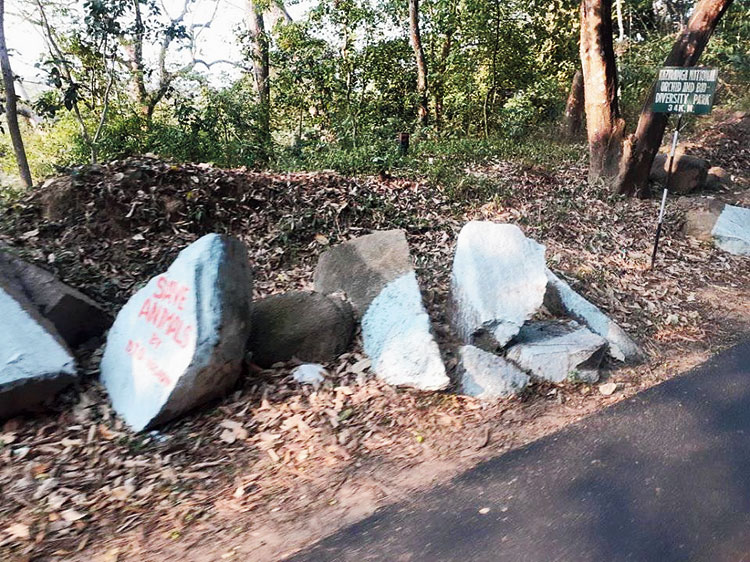 Come to Kaziranga National Park (KNP) and one can see boulders along a 35km stretch of National Highway 37, that passes through the park, painted with messages of wildlife conservation and traffic awareness, thanks to an initiative taken by the Nagaon district transport officer (DTO) and students of the district.

The initiative was taken after the state government had asked all-district transport authorities to take adequate measures for road safety in Assam following a steep rise in number of accidents.

DTO Nagaon, Ranjeeb Barua, told The Telegraph: “We have decided to paint the rocks because those are easily visible at night in headlights. During daytime slogans and messages painted on rocks grab everyone’s attention and raise awareness about road safety.”

Over the times, traffic accidents on the KNP stretch were recorded not only due to rash driving, but also because of the presence of multiple animal corridors through the highway. Humans and animals are vulnerable to road mishaps in the area.

“The idea was to spread the message of both road and wildlife safety. We have also engaged students of Gyanpith Junior College in the district so that the youngsters will also be aware of importance of road safety. The entire stretch of some 35km from KNP’s Burapahar range to Bagori range in the district was covered under the initiative,” he added.

According to the state’s traffic police, on an average, over 11 road accidents and four deaths were recorded daily between January and July last year in Assam. The records said between January and July in 2019, at least 2,359 incidents of road mishaps were recorded in the state in which some 928 people were killed and 1,980 suffered serious injuries.

Every year during the floods, several animals, mainly hog deer meet with road accidents when they try to reach highlands. Though the park authorities use measures like “time card” to limit vehicle speed, deaths of animals continue to occur every year.