In chorus of anti-CAA protests, a lone voice 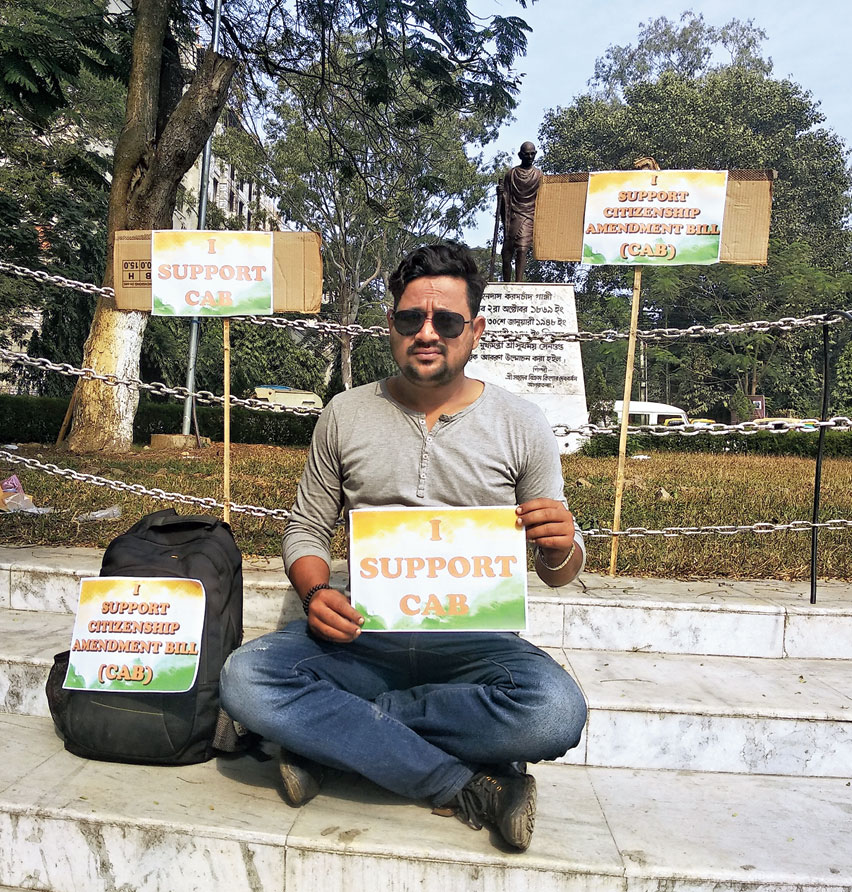 Amid the din of anti-Citizenship (Amendment) Act protests across the nation, a 32-year-old unemployed man on Tuesday came forward in support of the Citizenship Amendment Bill (CAB) here.

Samir Banik sat with four placards, all reading “I am supporting CAB”, in front of Mahatma Gandhi’s statue near the circuit house here from 7am till noon.

Speaking to The Telegraph on Tuesday morning, Banik said: “I am sitting here in support of CAB. I want to congratulate and thank our Prime minister Narendra Modi and Union home minister Amit Shah for passing the bill in Parliament for the good of the country.”

He said the CAA would not harm anybody and there was nothing to be afraid of.

“I will continue to support and I am planning to sit in each district of the state in support of the act. I do not belong to any political party or organisation. I am just an Indian citizen and I am supporting this act. I do not know who are opposing it and for what purpose. If my forefathers had migrated from Bangladesh and I was born here in Tripura, I am an Indian. Why will I oppose the act?” Banik asked.

He added that Shah had said in Parliament that there was nothing to be afraid of and CAA would give citizenship to all those who were left out.

Banik said: “I have seen many people protesting against the act and destroying government properties, but I do not know who is supporting them from behind. I cannot go to Delhi to express my gratitude. All I can do is sit here and send my message through the media. I am sitting here from 7am.”

He claimed the people were protesting against the act without knowing what it entails.

“People are protesting against it without knowing it properly. Shah has clearly said the act is going to be implemented for the people who haven’t got citizenship of India. It is not to divide the country. Everyone should come forward in support of the act,” he added.