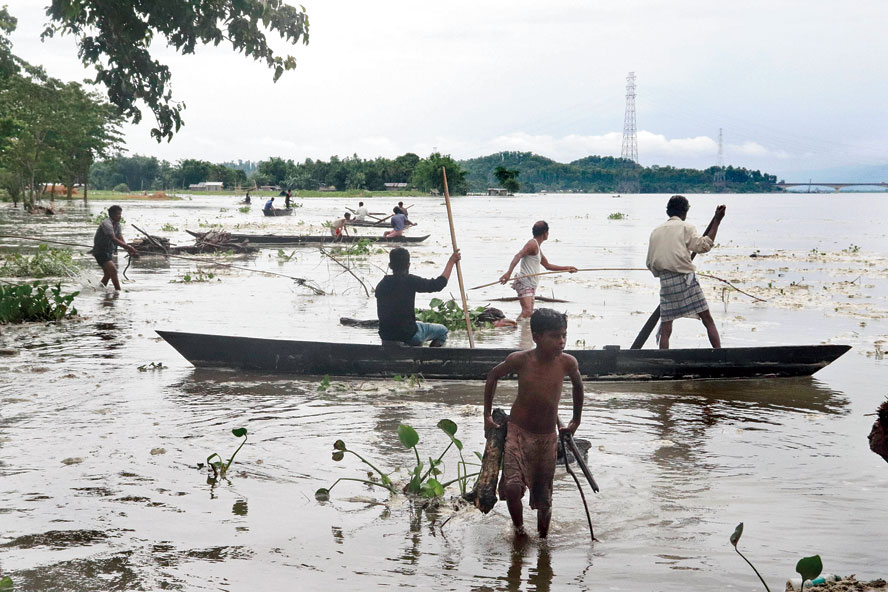 As many as 21 districts and a population of over 4.6 lakh have been affected in the ongoing flood in Assam with water entering Dibrugarh town and coming threateningly close to entering the capital city. Assam has 33 districts.

With the death of two more persons on Saturday, altogether 18 persons have died in the flood that hit the state on May 22, according to official sources.

Social media was abuzz with updates and comments on flood and the problems being faced by the affected. Such has been the situation that Oil India Limited had to call off all activities related to the capping of the gas well blowout at Baghjan, about 530km east of Guwahati, because the surrounding area was submerged by the flood water which has also hit the Kaziranga National Park.

According to the Central Water Commission, all major rivers are flowing over the danger level because of incessant rainfall over the past few days. The MET office has predicted heavy rain in the northeast till Tuesday.

Assam State Disaster Management Authority said that 19,496 affected people are living in 132 relief camps, the most in Tinsukia (53) Dibrugarh (41) followed by Dhemaji and Goalpara with eight each.

All the 22 wards of Dibrugarh are under water while all the major rivers flowing along and within Guwahati have registered a rising trend. With heavy rainfall over the past few days, the Kamrup (Metro) District have asked people living in landslide prone areas to move to safer places till the monsoon are over.

On Friday, a person died in a landslide in the Kahilipara area while a major highway was blocked because of landslip in the Amingaon area here. “The situation is bad. Covid cases are rising and now we are staring at flood,” an official said.

Total lockdown is being implemented for 14 days from Sunday midnight in Kamrup Metro district to check the spread of Covid-19 cases.

The National Disaster Response Force (NDRF) has been deployed in over eight districts to meet any eventuality.