40% of locals are involved in the fishing business 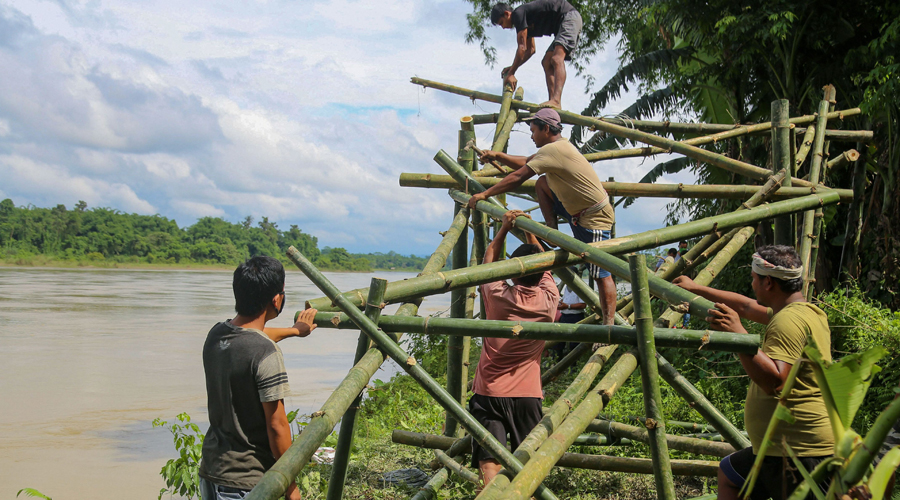 The mixing of condensate with floodwaters in a wetland close to the site of an Oil India gas well blowout at Baghjan in Tinsukia district of Assam has killed fish in large numbers, a forest official said.
The official said fish have died in huge numbers in the past few days in the Maguri-Motapung Beel (wetland) as floodwaters turned “acidic” after mixing with the condensate, a form of crude that has been spewing from the gas well since May 27. The chemical spray has affected nearby water bodies, grassland, paddy fields and tea plantations.
The death of fish compounds the problems for locals as around 40 per cent of them are involved in the fishing business. Around 9,000 residents are living in 10 relief camps since the well blowout and subsequent fire.
The forest official told The Telegraph he had tested the water of the wetland, around 400m from the affected gas well, following reports that fish are dying in huge numbers after the area was hit by floods.
“We recorded pH level of 6.3 on June 26 and 5.9 on June 27 which suggests the water has turned acidic. It could affect aquatic life. We also spotted a few dead snakes, birds and worms. It is difficult to quantify but many fish have died within an area of 1sqkm. Oil India personnel, however, said the deaths were not caused by the mixing of condensate with the water,” the official said.
pH is measure of how acidic or basic water is. A pH value of less than 7 suggests the water is acidic.
Baghjan resident Hemanta Moran and the forest official said the floodwaters helped wash away some of the condensate but there are areas where it is still stuck. “The condensate affected the water bodies and nearby fields and plantations. We are suffering from air, noise and water pollution since the blowout. The flood has further compounded our problems. Oil India should try to cap the well as soon as possible. Otherwise, the damage to the environment and livelihood will only increase by the day,” said Moran.
Tinsukia is one of the worst affected districts by the floods. However, the water level has been receding since Sunday.
The forest official said Oil India was taking steps to remove the condensate and check the flow of condensate to the Dangori river. “They (Oil India) are removing the condensate and are also going for bio-remedial measures which will take at least two months to clear the area,” he said.
An Oil India statement said New Delhi-based The Energy and Resources Institute is conducting the study on bioremediation of sludge. The institute has been already monitoring air quality and noise level in the affected area.
“However, the bioremediation job has been put on hold till the water level recedes in the earmarked sites,” the statement said, adding that flood and heavy rainfall have affected operations.
Meanwhile, the flood situation in Assam remained grim.
According to the Assam State Disaster Management Authority report, 13,16,927 lakh people have been affected by floods in 25 districts. Four persons have died in the deluge since Sunday taking the number of deaths to 24 since May 22. At least 27,452 people are taking shelter in 273 relief camps, with the most (18,258) in Tinsukia district. Around 15 lakh animals have been also affected and 83,168 hectares of cropland damaged.
Union home minister Amit Shah on Sunday reviewed the flood situation in Assam and assured all possible help to the state government.