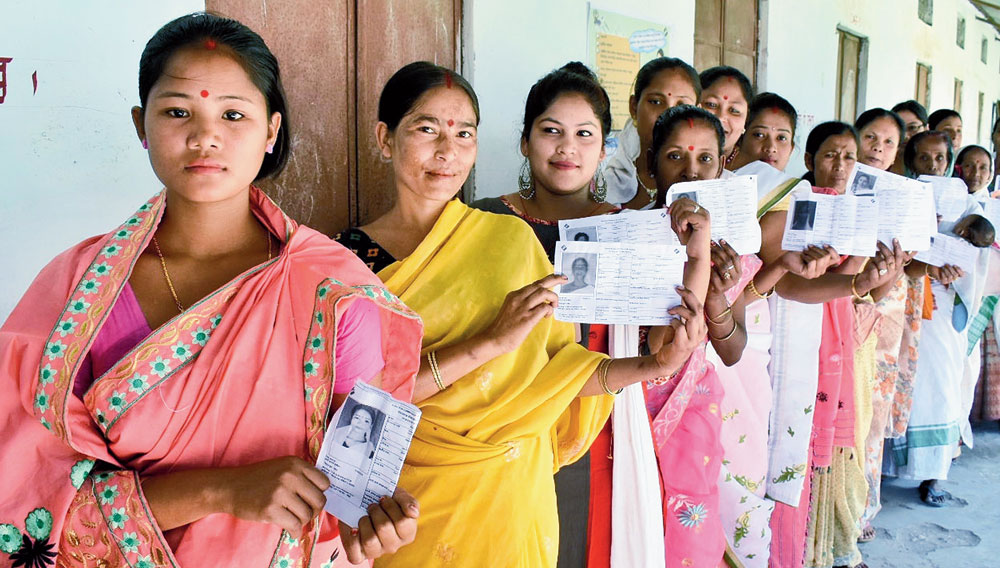 The first phase of Lok Sabha elections in Assam recorded 78.23 per cent turnout, a marginal dip from the 2014 elections, when the percentage was 78.75.

The office of the chief electoral officer, Assam, released the final poll data on Friday. Till 5pm on Thursday, the percentage was 67.4 per cent.

Chief electoral officer Mukesh Sahu said officials from remote polling stations continued to return till Friday and the last team arrived at their respective district offices at 3pm. Hence, there was a delay in data compilation.

The poll percentage fell despite a campaign launched by the chief electoral officer office with the slogan “no voter left behind”.

The second phase of elections will be held on April 18 in Karimganj, Silchar, Autonomous District, Mangaldoi and Nawgong constituencies. The third phase will be held on April 23 in Dhubri, Kokrajhar, Barpeta and Gauhati. Officials of the chief electoral officer are hopeful that the poll percentage will improve in the second and third phase of elections. Various political parties have intensified their campaign for the next two phases.

The voter turnout in Meghalaya on Thursday was an impressive 71.37 per cent with more women voters enthusiastically participating in the democratic process.

Under Shillong parliamentary seat, which has 36 Assembly segments, the voter turnout was highest in Sutnga-Saipung with 74.26 per cent while the lowest was in Mawlai with 59.32 per cent.

In Tura constituency, where there are 24 Assembly segments, the highest turnout was witnessed in Selsella where 92.2 per cent of the voters came out to exercise their franchise while the lowest was 71.97 per cent in South Tura. Here the turnout was 81.20 per cent, 3.06 per cent higher than five years ago. In Selsella, there was a simultaneous Assembly bypoll. Kharkongor said, “The turnout in urban areas was fairly robust. It is not entirely true that there is urban apathy.” While polling passed off peacefully, he said a recommendation has been sent to the Election Commission to hold a repoll at one polling station under Selsella after the presiding officer committed a “human error”.

“Due to the simultaneous polls in Selsella, it was detected that there was a mismatch in the number of votes recorded because of criss-crossing of machines,” he said.

Another official explained that two sets of voting machines, including VVPATs, were set up in polling booths in Selsella. But in the concerned polling station, where a repoll is likely to be held, and which has 712 voters, the presiding officer had erroneously criss-crossed the machines for the Assembly bypoll and parliamentary poll.

Kharkongor also said in six polling stations, the presiding officers failed to clear the results of the mock poll. For these polling stations, it was recommended to the commission that counting of the slips in the VVPAT machines will be taken up on counting day.

Rs 71 lakh was seized in cash from various places during polling, of which Rs 42 lakh has been sent to the income tax department for examination. Hailing the women voters, Kharkongor said, “We are very proud of our women. They are proactive participants whether it is during enrolment or during voting.”