Altogether 35 people have been arrested, including an expelled BJP youth leader, indicating the presence of a well-oiled recruitment racket 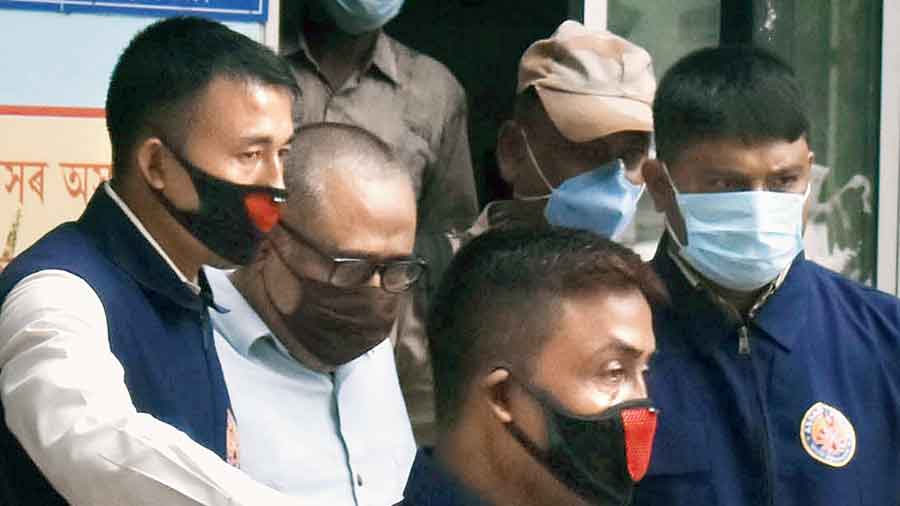 Former deputy-inspector general of police P.K. Dutta, a suspect in the police recruitment examination paper leak case, was detained on the Indo-Nepal border in Bengal on Tuesday night.

Sources said Dutta was apprehended by Bengal police from Kakarbhitta area along the Indo-Nepal border and was kept in Siliguri. The lookout circular was issued for Dutta on September 28.

Assam police headquarters on Wednesday evening released a statement saying Dutta was arrested on Wednesday morning by the state CID in connection with the case registered under Sections 409 and 120B of the IPC and Section 66B of the IT Act.

“After getting his medical examination conducted in MMC Hospital, he was produced today before Hon’ble CJM Court along with prayer to allow 7 days Police Remand. The court granted 6 days police remand and accordingly P. K. Dutta is in custody of CID,” the statement said.

It said the number of arrests in connection with the CID police station case no. 21/2020 stands at 14.

Altogether 35 people have been arrested in the paper leak case, sources said, adding the Union home ministry too had a role to play in Dutta’s arrest.

Dutta was taken to Mahendra Mohan Choudhury Hospital for medical check-up where he tested negative for Covid-19. He was then produced in the court of the chief judicial magistrate in Guwahati which remanded Dutta in the custody of the CID for six days. The CID and Guwahati police’s crime branch are probing the case.

Another key player in the case, expelled BJP youth leader Diban Deka, was arrested from Barpeta district. A court here extended Deka’s CID custody by six more days on Tuesday. Deka was on the run from September 20, the day the paper leak led to the cancellation of the sub-inspector recruitment exam, and Dutta from around September 22.

A police team had raided Dutta’s residence at Hengerabari here and four hotels and properties in Guwahati and Dibrugarh linked to him.

The raids and interrogation of the arrested had revealed that he might have fled to Nepal where his son-in-law lived. Dutta and his son fled to Nepal after the former officer’s name started doing the rounds in the case.

A mock test was held on the eve of the examination in a hotel and a lodge here, reports suggest, indicating the presence of a well-oiled recruitment racket.

The chairman of the now-reconstituted state level police recruitment board, which conducted the exam, had resigned owning moral responsibility for the paper leak.

A Congress leader has also come under the scanner in connection with the case but the Opposition party has stepped up its attack on the BJP-led government by staging protests near the offices of superintendents of police in all 33 districts on Monday.

Nalbari superintendent of police Amanjeet Kaur told The Telegraph they have arrested 11 people so far and are questioning several others in connection with the case.

“We have also conducted raids in several places in search of the accused in Barpeta district, including Rokibul Islam, an advocate. Islam is on the run. We also brought Ataf Ali for questioning from Barpeta on Sunday but have let him go,” Kaur told this newspaper on Tuesday.

Kaur did not refer to their political affiliation but the Congress admitted that Islam and Ali were its members. The party expelled Ali and directed its Barpeta unit to inquire into Islam’s case. Islam was the Barpeta district Congress president but became inactive after he was denied a party ticket for the zilla parishad polls. Ali headed the Barpeta district Congress’s RTI cell.

“Our PCC chief has made it clear that law will take its own course. Those behind the scam should be brought to book, irrespective of party affiliation. Ali has been expelled, and our Barpeta district unit is inquiring into Islam’s case. We successfully staged our SP office gherao protest in all districts despite heavy deployment of security forces. Several people sustained minor injuries,” PCC spokesperson Rhituporna Konwar said.

“The BJP-led government should live up to its zero-corruption slogan. It is not enough to use a catchy slogan. It is not only the SI exams. There have been anomalies in exams of other departments too. The chief minister is directly involved in the scam. He should resign and a probe conducted by a high court judge,” another PCC spokesperson Imdad Hussain said.

Monday’s protest follows the dharnas carried out by the NSUI and the Youth Congress. The Congress has been highlighting the recruitment scam in a bid to embarrass the chief minister and the BJP and also connect with the disgruntled youth, especially the unemployed, before the 2021 Assembly polls.

Chief minister Sarbananda Sonowal on Wednesday said here that his government’s uncompromising tirade against corruption will continue. He also made it clear that politicians, government officers or whosoever is found indulging in corruption will not be spared.

He also accused the Congress of being the “saudagar of durniti” (merchant of corruption) during its 15-year rule before it was ousted in 2016. “We will spare no one. We launched an investigation as soon as we got to know about the paper leak. There was no public complaint,” Sonowal said.

Coming down heavily on the Congress “misrule” in the state, Sonowal said it had “opened shops of brazen corrupt practices” by facilitating recruitment scams in every department. His government had to spend a lot of time in “cleaning the filth” left behind by the previous government and the Congress had lost moral right to “criticise” others on corruption, he said.

All Assam Students Union general secretary Lurinjyoti Gogoi has demanded that the probe should move beyond Deka and Dutta and find out how the question paper got leaked and who leaked it. “This scam is bigger than the APSC cash-for-jobs scam. More people are involved. We want to know whether the names of politicians whose names are doing the rounds will be brought under the ambit of the probe? Whether former SLPRB chairman (Pradeep Kumar) will be brought under the ambit of the ongoing investigation?” he asked.

The APSC scam took place during the erstwhile Congress regime.

The Assam cabinet on Wednesday decided to do away with private agencies in the government recruitment process.

“Departments themselves will hold the exams or conduct recruitment through state or central universities,” the government said on Wednesday night.