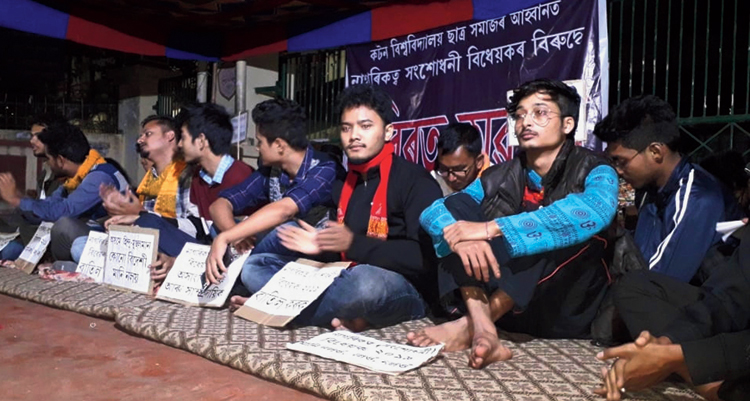 Cotton University students, who are on an “uninterrupted hunger strike” since Monday night despite ongoing examinations, on Tuesday also announced a non-cooperation movement against the government in protest against the “contentious and divisive” Citizenship (Amendment) Bill.

Cotton University Students’ Union (CUSU) general secretary Rahul Bordoloi said the hunger strike, being staged in front of the main entrance of the university at Panbazar here, will continue until the government scraps the bill that was passed in Lok Sabha on Monday night by 311 to 80 votes.

The CUSU will hold a meeting with student unions of various universities on Wednesday to chalk out a plan for launching a united movement.

Campuses of all the major universities in Assam — Tezpur (a central university), Gauhati and Dibrugarh — have been restive over the bill. Students of Cotton and Dibrugarh universities had earlier banned the entry of chief minister Sarbananda Sonowal and other BJP leaders to the institutions.

An undergraduate student of Cotton University, Hirak Jyoti Patowary, said, “In protest against the bill, we will not allow holding of any kind of government programme or participate in them in the university. We will protest democratically. We will launch a non-cooperation movement against the government and will not attend government functions like Khelo India.”

Deepjyoti Das, former general secretary of CUSU and a student of the university, said like the British, the Centre was trying to divert issues in the Northeast with its “divide-and-rule” policies.

“The government has isolated Assam. The other states of the Northeast have been almost exempted from the bill but Assam is burning due to CAB. The bill was passed despite massive protests across the state. They don’t care about the sentiments of the their own people,” Das said.

Abhilasha Neog, a fifth semester student, said, “We are protesting in the midst of our examinations as the bill goes against the secular Constitution. It is a threat to our identity and Assamese culture. It will nullify Assam Accord.”

Gauhati and Dibrugarh universities rescheduled all exams for December 10 in the wake of the protests but other exams are so far scheduled to be held.

A team of 120 students of Cotton University will visit the villages of Assam to create awareness if the bill becomes a law.