12000 set off on road travel to native places 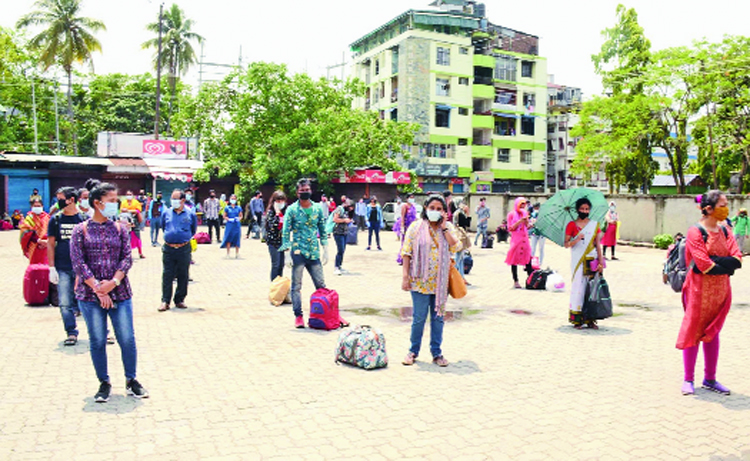 Passengers wait at Machkhowa bus stand in Guwahati on Saturday to board buses to their native places.
Picture by UB Photos
Pranjal Baruah   |   Guwahati   |   Published 25.04.20, 06:54 PM

Providing relief to people stranded in various districts of Assam, nearly 12,000 of them were allowed to make an inter-district one-way homebound or workplace-bound journey on Saturday under strict home ministry rules.

According to the state government directive, from April 25 to April 27, stranded people will be allowed to commute. While private vehicle owners were asked to avail of e-passes from their respective district administrations, others were provided with Assam State Transport Corporation (ASTC) buses.

Over the last three days, the state government had received over 92,000 requests from such stranded persons who were stuck for almost a month since the beginning of the nationwide lockdown on March 24 and wanted to go back to their native place.

“For the first day, around 12,206 people having private vehicles were permitted by the administration, besides hundreds of others who boarded ASTC buses. The government has also rejected 9,745 requests as they were found not fit under MHA guidelines,” senior cabinet minister Himanta Biswa Sarma said.

Over 41,000 who don’t have vehicles have applied for the passes.

ASTC managing director Anand Prakash Tiwari, said, “People who have called and registered on 104 helpline for inter-district travel will receive an SMS ticket with bus details, name, as well as the date and time of the day of journey and details of boarding points. Only those having the SMS ticket will be allowed to travel in buses after showing their details.”

Since Saturday morning, long queues were seen at the designated bus stops all over the state. Passengers were medically screened before being allowed to board the buses. In the capital city, a few city buses and app-based cabs were also allowed for the convenience of the passengers to reach the bus stops. They were also advised to be in home observation for the next couple of days. Local health workers were also asked to keep an eye on them.

Transport minister Chandra Mohan Patowary said, “Today, around 5,000 passengers travelled in around 300 buses. Tomorrow, we are targeting to accommodate 15,000 passengers.”

Arijit Barman, a passenger said, “I had come to Guwahati for some office work and got stuck. I am heading to my hometown in Bongaigaon. It’s such a relief.”

However, many complained that the helpline number 104 was not reachable. “Every time I called 104, I could not get through the line. Why didn’t the transport department issue its own helpline or online facilities? Now I’m stuck again,” rued Ruprekha Medhi, a student from Golaghat.

The day also witnessed confusion among the business community following the Centre’s notice regarding opening of the neighbourhood and standalone shops after reviewing the situation in the state.

Many traders as well as the public thought shops would be open from Saturday and many even opened their stores, but the police immediately shut them as the government said that it has not taken any such decision yet. “There has been no relaxation in the ongoing lockdown regulations yet and the government has not taken any decision on the opening of shops, beauty parlours, etc.,” said chief secretary Kumar Sanjay Krishna.

Later, chief minister Sarbananda Sonowal added, “On April 27, the state government will decide on the opening of the shops after the video conference with the Prime Minister Narendra Modi. So people are requested to make the lockdown successful and follow the government orders.”

Over 90 itinerant people from Bengal’s North 24-Parganas are stuck in Chandakhol village, around 6km from Dhubri town. “We came to Dhubri almost four months ago. When we were about to leave, the lockdown was announced. Since then, we are living on this field,” said Ranjit Maal, head of the group.